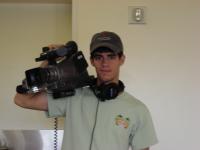 About Me: I'm a 20 year old student at the Art Institute of Ohio-Cincinnati. I am in the Video Production program, and plan to go on to film school after graduating in two years. I am a super movie geek, constantly learning new things about films and film-making.

"Allow myself to introduce myself" - Austin Powers

One of the best films of the DECADE!

The Dark Knight is one of the most hyped and anticipated films of all time. and it actually lives up to the mountains of hype. Christain Bale stars as the title character, and does a terrific job. Caine, Freeman, and Oldman all return to their original roles from 'Begins', and Katie Holmes is rightfully swapped for Maggie Gyllenhal. The two newcomers, Heath Ledger and and Aaron Eckhart star as The Joker and Harvey "Two-face" Dent, respectively. The film begins immediately showing how insane the joker truly is. That is a good portion of the movie, displaying the incredible craziness of the character. The Joker is one of the most memorable villains in all of film history. Yes, it is that good. He is terrifying. He is disgustingly …

I totally agree! Thanks for the review.

actually the story is about dancing and there is plenty of that! Good dancing too

Daniel Day-Lewis won an Oscar in 1989 from babbling incoherently for an hour and a half... and he robbed Morgan Freeman of what should have been his first Oscar. My Left Foot was nothing more than a &quot;hype&quot; movie much like Brokeback Mountain... barely an interesting story but it hit on the hot button topic of it's time.

the point is that many people were caught up in the hype and I did NOT think it lived up to the hype.

Wow, an actor has everything to do with how much one is able to like a movie. I am not impressed with Bale. Bale is Batman. Therefore I am not wild about Batman. Fortunately, I like Christopher Nolan. I want to be nice, but maybe I'll suggest that impressionable fans like you should not buy into the hype that is Batman. Because next year you'll have completely forgotten about it, when the next blockbuster comes along. What are some of the movies that have held up for you that are over 5 years &hellip;

Yeah....I need to see it though because I have seen all of his films. I probably will wait for the cheap seats.

Bond movies are sexy? Well, I guess you have to please the women croud too.