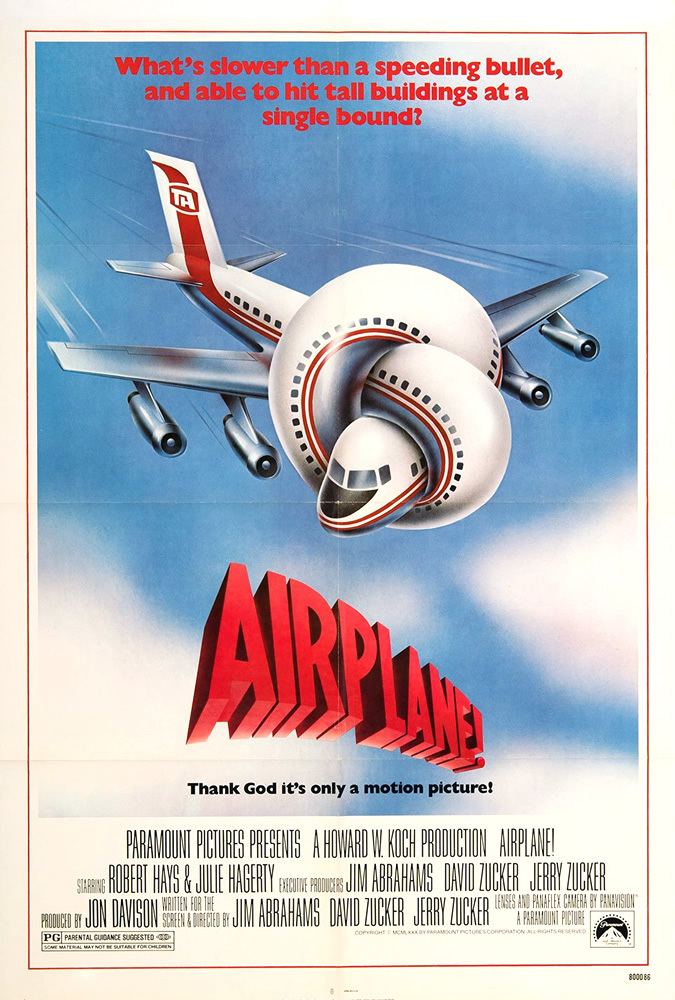 Plot: When the crew and many passengers of an airliner fall sick, it's up to an ex-war pilot to land them safely. A spoof of airline disaster movies .

The most perfect and most iconic spoof comedy ever made.

Back when spoof movies was smart and funny. Airplane is about a fly crew and many passengers of an airliner fall sick, it's up to an ex-war pilot to land them safely. A spoof of airline disaster movies. The writing in this movie was so clever and so new back then that it still sticks today. The jokes worked so well in this movie because it has a point not like spoof movies today that is people getting hit in the head or sex jokes and all that rubbish.

I've looked at dozens of "Best Comedy Movie Ever" lists on the internet, and this hilarious movie is on almost every one of them. And if it isn't? Then that person must have been in a coma when ranking them. This is THE most quoable comedy of all time - bar none. That's because there are dozens of funny lines in this one. The writing is so good, even former basketball player Kareem Abdul Jabbar is funny ... no small task. The scene that accompanies the song "Stayin Alive" will forever be eteched in your memory. And I've heard people say "And don't call me Shirley" more than I've heard them call my name.

Loved both Neilson and Bridges in this film..

Re-watched this weekend. Every few years this spoof movie somehow slips it's way back into my thought pattern (As scary as that may be) This being the case this weekend threw it in the dvd player for another viewing. Airplane! is one of those comedy films that is funniest when you watch it intially the first time. Any other watches drain it of it's comedic value. However that being said i still laughed out loud many times expecially at the parts of my favorite charector in the film Steve Mc Croskey (Lloyd Bridges) whose many quotes of (Look's like i picked the wrong time to....) still reign supreme. Also killer in his role in this classic is Dr. Barry Rumack (Leslie Nielson) whose classic poker faces whilst delivering funny lines (Something he carried on to his role as Lt. Frank Drebin …

Airplane is one the pioneers of disaster comedies. If only they had a realistic movie plot/setting, this could have been perfect for me. The autopilot kind of ruined some of the films luster. The cast did an awesome job with the comedic timing. Its jokes are timeless and Leslie Nielsen will never be forgotten. Robert Hays and Julie Hagerty had good onscreen presence. Kareem did a decent job as well. If these quotes wonât make you laugh, then this movie was not remarkable enough:
Tower voice: Tower's radio clearance, over!
Captain Oveur: That's Clarence Oveur. Over.
Tower voice: Over.
Captain Oveur: Roger.
Roger Murdock: Huh?
Tower voice: Roger, over!
Roger Murdock: What?
Ted Striker: Surely you can't be serious.
Rumack: I am serious... and don't call me …

"Ted Striker" (Robert Hays) has tracked down his ex-girlfriend "Elaine Dickinson" (Julie Hagerty) to the airport she works out of, and purchases a ticket on her flight to talk to her despite having a fear of flying since flying in the war. While on board to talk to "Elaine", the flight crew, and some passengers, come down with a very serious case of food poisoning, and he has to conquer his fear very quickly to safely land the airplane with the help of his former superior officer who is talking him down from Chicago Air Traffic Control.

Airplane! is one of the craziest movies you will ever see. There are way too many sight gags, slapsticK and funny one-liners in the film, which will require that you watch it over and over and over again.

The all-star cast is hilariously …

No posts have been made on this movie yet. Be the first to start talking about Airplane!!