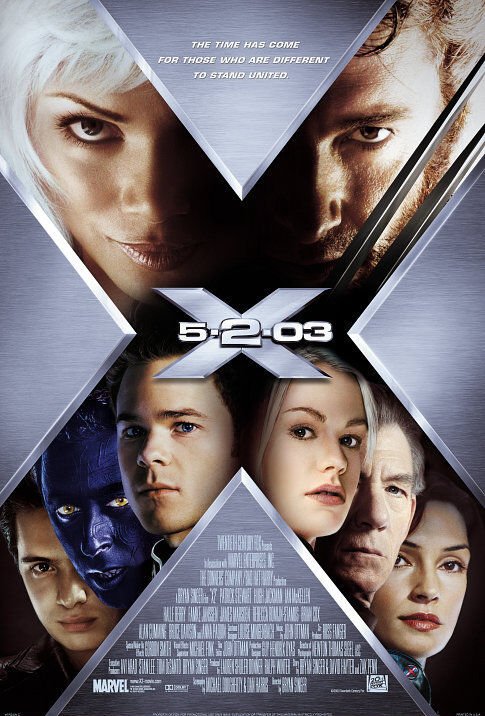 Plot: Dissent against mutants is on the rise after an assissination attempt on the President of the United States.

Heavier and more expansive, as a sequel should always be.

A squeal that delivers. This movie has bad-ass characters and the visual effect's this time is fantastic and well done and also Wolverine is more bad-ass then the first movie.

In a continuance of the saga he began, Bryan Singer expands on the action sequences and mutant powers he explored in the first film. X2 is flashier, more adventuresome, and, sometimes, cheesier. As a big budget super hero adaptation fueled by adrenaline, it works, and it is vastly superior to the crowded third entry.

Viewing a film the second time around makes you appreciate the beauty and accuracy of how good the film was. Direction was creative and authentic. Definitely in the same class of Avengers and TDK (DC) for engaging superhero films. Kurt Wagner aka. Nightcrawler (Alan Cumming) was manipulated by Col. Stryker (Brian Cox) to attack the President. Mystique (Rebecca Romijn-Stamos) gains information about Magneto's (Ian McKellen) cell. The X-Men do their best to shelter youthful mutants. Wolverine Rogue, Rogue, her boyfriend Iceman, Cyclops, Storm, and Jean Grey do their best to save humans. The 2-disc DVD provided more than hours of bonus features divulging the impact/history of X-Men, settings, costumes, make-up, interviews and special effects. The dark enticing plot, realistic …

Wolverine returns from a failed attempt to discover his origins to find the X-Men under siege from a shadowy organisation bent on the extermination of mutantkind. As a long time fan of the comic books, the original X-Men film was a disappointment. Its superficial realisation of the characters and their relationships and an all but absent plot was wholly unsatisfactory, but what it succeeded in doing was laying the groundwork for a sequel that could take the ideas presented and run with them to glorious effect; and that's exactly what Bryan Singer did with X2. Wolverine, who was always by far the most intriguing character, rightfully takes centre stage and his exploration of his past seen here is far more interesting (and accurate) than his own cinematic vehicle X-Men Origins: Wolverine …

A great follow up to the first movie. This is Singer at the top of his game. It has alot of great things going on. An amazing action filled opening sequence. It has great new characters including one of my favorites from the Marvel universe NIGHTCRAWLER!! Alan Cumming does an amazing job bringing the teleporting mutant to life. Another great performace is from Brian Cox as Willian Stryker. The man responsible from Wolvies gifts/curses. And speaking of Wolverine there are some great moments with him. I love his interactions with future team member Iceman. Then there's the asskicking sequence when Wolvie lets loose his berserker rage on Stryker's soldiers.
Like i said before director Bryan Singer brought his A game to this project. It's a shame that FOX could've waited until Singer was …

No posts have been made on this movie yet. Be the first to start talking about X2 - X-Men United!