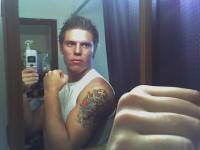 About Me: I love movies! Watching them and making them. I also love music! I love all things 80's good and bad! I'm young & single and i loves to mingle!! I am a huge transformers geek and proud of it!!

Interests: I love watching movies good and bad. It does not get better than going out with my awesome friends and acting like a ldiot. I love love love Asian women. I dream of taking a trip to Tokyo and never leaving. For about 14 years i have been making my own series of underground mixtape shows for friends or whomever will listen.

Guilty Pleasure: 10 Things I Hate About You

Least Favorite Actors: Everyone, From The Cast of, High School, Musical

Movie Quotes: Totes Magotes!!-I Love You, Man Fogell... shut the fuck up. And take off that vest. You look like Aladdin. -Superbad

Masters of the Universe

Where the heck is Mechaneck?

Masters of the Universe for the most part still holds up as a pretty good fantasy/adventure flick. The cast was pretty solid. Dolph Lundgren was a perfect fit for Eternia's greatest warrior, He-Man. He was joined by MOTU staples Man-At-Arms & Teela. A bumbling dwarf by the name of Gwildor was created for this film. He was a pretty good replacement for Orco. A very cute post "dancing in the dark" Courteney Cox also stars. On the bad side you have an awesome performance by Frank Langella (Frost/Nixon) as Skeletor. He was joined by a great looking Evil-Lyn & Beastman. There were three kick-ass new villians. Saurod, Blade and Karg showed up to add a bit more danger for our heroes. Also there was a plot point about a thing called the Cosmic …

Most Anticipated Movies of 2010

I'm glad that some one else appreciates a good B movie.

I agree that Frank Langella was an awesome Skeletor

Very much looking forward to the Scott Pilgram movie! It has a solid cast and director!

Also i think i will dig Due Date it has Zach G. and Robert Downey Jr. and Todd Phillips is the director!

tied with #2 would be Kick-Ass

The Legacy of The Late Great John Hughes comment

o.k. i agree with 1, 3, 4, 8 and 9. No, 6 just sucked altogether. but what was wrong with end of grease? ok so the carnival thing a little lame. but it didn't leave you hangin' like the rest on your list. I was so pissed at the end of 'the mist'and 'cast away'

i don't know when you did this list, but i would so put &quot;the incredible hulk' with Ed Norton.