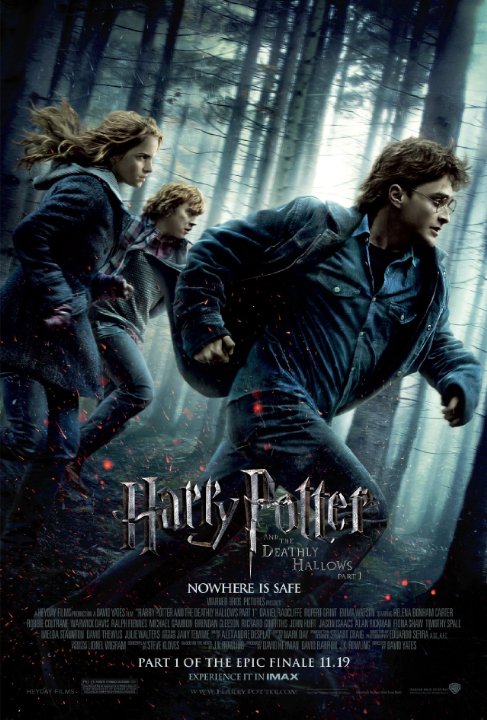 Plot: As Voldemort consolidates his power, Harry, Hermione and Ron leave Hogwarts behind to begin their own quest to finish Dumbledore's mission to find and destroy the horcruxes. -- Chris Kavan

Slow-moving, but this character driven entry delivers just as much as any great thriller would. Great performances by Radcliffe and Watson.

A good, but not great entry in the Potter franchise. It stays quite true to the source material, shortening some scenes here and there, but for the most part, it didn't skip or change much at all. You must see the sequel, or most of this film just seems out of place because it's a total set-up for the final film. If you're a Potter fan, you've probably already seen this, but even if you're not, see it anyway.

Lacks the Magic of the Previous Entries

After viewing Harry Potter and the Order of the Phoenix, I declared it the worst of the Potter films so far. It was quickly replaced, however, by Harry Potter and the Half-Blood Prince. Still, when all was said and done, I enjoyed the films, as they still managed to mostly display what had made the more entertaining predecessors so enjoyable. Unfortunately, Harry Potter and the Deathly Hallows: Part 1 (an extraordinarily tedious name to say or type), is the new weakest entry for the series, and it could hardly be considered enjoyable.

Harry, Ron, and Hermione set out on a quest to destroy the Horocruxes which keep Voldemort immortal. And that's essentially the entire plot.

There are a number of things that make the Harry Potter films enjoyable. The characters are the main …

Two and a half hours of nothing.

The movie is like a balloon. Full of nothing but air.
This movie shows itself off as big and sophisticated, when it's anything but. Oh great, Daniel Radcliffe and Rupert Grint can get into an argument on-screen; I think I smell Academy Awards around the corner. It is so horribly paced, it feels like it's afraid to move from that one spot in the woods.
Think about it, what was achieved by the end of the film? Did the characters develop? No. Did they come any closer to defeating Voldemort? No.
I was there on opening night, paid full price for 3D, and sat there with my friend with stupid expressions on our faces for the majority of the film, waiting for something to happen. And when something did happen, like the brilliant CGI snake jump scare, I was dying of laughter, so …

As a huge fan of Star Wars and Lord of The Rings franchise, I felt a bit biased with these 2 and shrugged of all the hype I heard about Harry Potter. Who doesnât love a local farm boy becoming a Jedi/hero or a Hobbit enduring every obstacle to make history (many symbolisms as well from both franchises)? How can I become interested with 3 kids who are in a school to learn magic? After watching the very first film (Sorcererâs Stone) I felt a little connection with the characters of Daniel Radcliffe, Emma Watson, and Rupert Grint. Ron was the comic relief and buddy of Harry. Hermione reminded me of Electionâs Tracy Flick, who is a active smart book worm and very conniving. She is a toned version since she is one of the 3 protagonists. Harry, like Neo in the Matrix, is the shy …

FOR ONCE! they stuck to the original script i.e. the book! thats why this was the first movie that was good....

After seeing it, I have to say that I think it's the best in the series. While the other movies had their moments, this is the first film where it really feels like there's a sense of danger - it's darker and it just feels like there's a lot more emotion going on. It will be interesting to see if part 2 can have the same effect.

i have heard mixed reviews of this movie, some loved it, others thought it to be too slow. i saw it for myself and believed it to be the best of the series, even though there was a lot of talking, a lot is learned if you actually pay attention to what they are speaking about.

It made $24 million in midnight showings alone. Early estimates place it anywhere from $120 - $130 million range, which would make it the best opening in the series - it would have to take in over $300 to best Half Blood Prince and $317 to best Sorcerer's Stone as the highest grossing movie of the series. There are a lot of &quot;serious&quot; films coming out in the next weeks - the only direct competition against Potter would be Tangled and the next Chronicles of Narnia film. If it has good word of &hellip;

Harry Potter and the Deathly Hallows: Part 1 is releasing worldwide on 19th of November 2010. I heard some good Pre-release reviews. Check out High Definition trailers and other interesting facts about the movie at:&amp;nbsp;http://www.fandango.com/h arrypotterandthedeathlyha llows:part1_109947/movieo verview