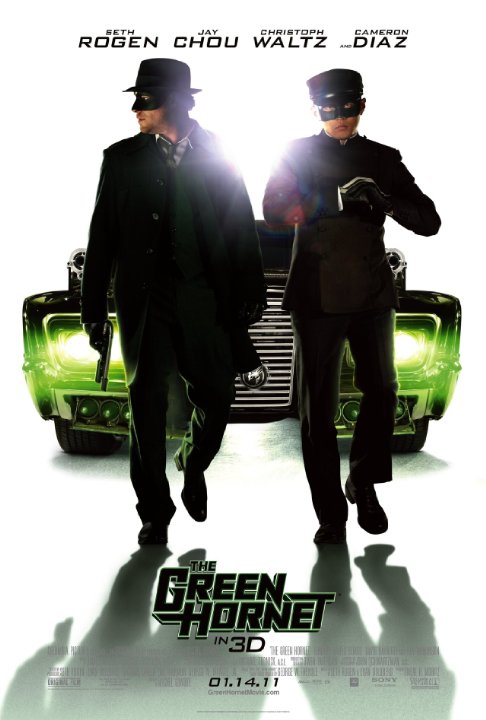 Plot: After his father is murdered, Britt Reid decides to find the men responsible by adopting a crime-fighting persona, the Green Hornet, with Kato by his side. -- Chris Kavan

A superhero movie that fails to be super.

I am a fan of Rogen, so I actually enjoyed this movie. It was a fun take on a "super" hero. I am not familiar with the original or the comic books, but I do enjoy the story between Reid and Kato. Both actors were fun and had good on screen chemistry together. This is for me a comedy rather an an Action-Hero movie. Not many laugh-out-loud parts, just a fun and easy watch.

The cars, The weapons, The action, Kato, Everything about this movie was awesome except for Seth Rogen as The Green Hornet.With the movie the way it was, It would've been truly awesome if Seth Green would've either cast somebody else as The Green Hornet or turned in a more serious role & not acted like an idiot the entire movie trying to make everything funny.At least we have the original

Entertaining, but nothing special or remarkable!

Britt (Seth Rogan) is the bored playboy son of rich newspaper owner, James Reid (Tom Wilkinson). With no discernible talent for anything other than living the high life, drinking, womanizing and enjoying well made cappuccinos from his fatherâs car mechanic, Kato (Jay Chou). When his father mysteriously dies, Britt takes over from him. Knowing next to nothing about running a paper or a household Britt alienates everyone but the enigmatic Cato who is skilled in weaponry, cars, and martial arts.

Deciding that doing nothing is boring (duh), Britt decides he will do something heroic by inventing his own superhero. What follows is a kind of bromance between the two characters who are soon crime busting and getting closer to the truth about his father who may have been on the take. …

The Green Hornet is yet another superhero movie that just fails. Seth Rogen is much to blame for this movie failing. He co-wrote the screenplay and is the main guy, yes he is the Green Hornet. He was a bad chose for this superhero. He just talks to much, the dialog was by far the worst thing in this whole movie. The dialog seems it was written in a day or two. The acting is pretty bad too, Rogan just does not do a good job. Christoph Waltz, fresh off his Oscar winning performance for Inglorious Bastards is the villain. He showed great promise after he did Inglorious Bastards, and I still think he is great. He is just wasted here. It wasn't entirely his fault, he is just given nothing to work with. He provides us with a villain, but not a character of any kind.

One of the films whose sidekick I enjoyed more than the main hero. Green Hornet seemed liked a spoiled brat instead of caring for others. The script was too light, not really much memorable lines either. There was no real threat from a villain, which is much needed in films like this to make it more compelling. So many things that needed to be changed. The effects,gadgets, car and action was worth seeing. This could have been better. …

Yeah, the trailers haven't inspired me at all. The main casting is just... weird and doesn't work for me at all. It's too bad because the supporting cast looks pretty good. Anyway I might rent this out of sheer boredom some day, but I will not see it in the theater.

From all changes in director, writer, and cast, I can just tell this movie will fail. The very fact that they're turning one of the most beloved characters in comic book history into a subject of comedy is just stupid. And the fact that they're converting it into last minute 3-D is just pointless. Both Clash of the Titans and the Last Airbender attempted that and failed epicly. They should not turn this into a comedy and should just keep it close to its source material. I for one will be &hellip;

This has epic Fail written all over it! WTF were they thinking?Glad Steven Chow was not attached to this although I am sure he would have made a better movie. Heard he is doing a big budget remake of (another) Bruce Lee pic. Wish he would stick to his bugs bunny meets the Matrix formula. Love his stuff!

Seth Rogen is the star of this movie and yes it looks pretty bad. Still might see it though if nothing else is out!

Ryan Reynolds does not impress me -- I did not see the trailer yet but the cover of Entertainment Weekly looks like Will Ferrell playing the role - and that would be disasterous.