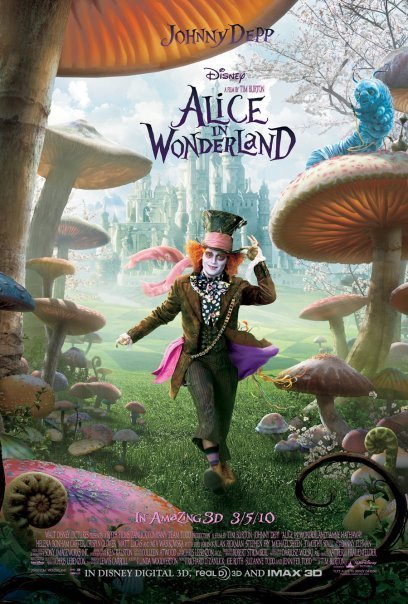 Plot: An older Alice once again finds herself back in Wonderland, though she doesn't remember her first visit. Tim Burton gives his own gothic twist on the classic tale as Alice must face the Red Queen once again and end her reign of terror while navigating the fantastic world. -- Chris Kavan

Although fairly generic and derivative, Tim Burton's "Alice" is a bizarrely dark take on the usually rosy Lewis Carroll tale.

Even though the original Alice in Wonderland was said to be made by a man doing drugs and I do not support drugs in any way, I must say it is one f my favorite movies. In the beginning Alice falls down the rabbit hole chasing after the white rabbit. This is actually her second visit to wonderland but she cannot remember the first. This time she is here to bring down the "bloody red queen" who is terrorizing wonderland.And being that it was made by a guy doing drugs this world is made of giant mushrooms and weird creatures like a vaporizing that talks named Cheshire. It may be weird but in my eyes that is what makes it awesome!

This remake/sequel live-action retread of Disney's own version of the 'Alice in Wonderland' series takes story elements from other various sources (namely 'Wizard of Oz') and makes a boring, confusing mess out of all of it. The appeal of the source material is that there was almost no plot and the themes of the story play out in many bizarre encounters that Alice has. She acted as a child in a child's fantasy and gained some enlightenment amidst the amusing chaos. In this incarnation, she's an adult stripped of any personality, traversing this make believe world without her trademark curiosity or wonder. She's a blank slate whom this âchosen oneâ style plot has forced into a heroine position for itâs âLord of the Ringsâ inspired finale. Itâs trite material. As far as …

Alice In Wonderland really is a mixed bag. I know that's hardly a way to begin a review, but when you've got a bag as mixed as this, it's hard to know quite where to start. I never can tell what Alice In Wonderland is trying to be, whether a drama, an action movie, a comedy, but it appears to be juggling all three at once, which provides mixed results, as I mentioned previously.

Instead of being a mere adaption of the Alice In Wonderland book, Tim Burton instead creates a story that occurs 13 years after. Alice is set to marry a lord who she does not want to marry at all. Demands from her mother and parents of Alice's predetermined husband further confuse and frustrate Alice. So to escape it all, she follows a familiar rabbit into a rabbit hole, and we all know what will happen from …

I just had to wonder what would happen if you mixed the nonsensical writings of Lewis Carroll with the off-beat directorial imagery of a film director like Tim Burton (âCorpse Brideâ, âNightmare Before Christmasâ). Fortunately for moviegoers, we get something that is a true visual buffet that could only be dreamed up by Mr. Burton and a story that still manages to maintain the whimsy of Carrollâs original work.

While titled âAlice In Wonderlandâ, the plot is actually derived from Carrollâs follow-up work, âAlice Through The Looking Glassâ. Writer, Linda Woolverton (âArtic Taleâ, âLion Kingâ), picks and chooses those elements from each of Carrollâs works that make this a more coherent tale, but still makes a point of carrying along most of the absurdity …

No posts have been made on this movie yet. Be the first to start talking about Alice in Wonderland!