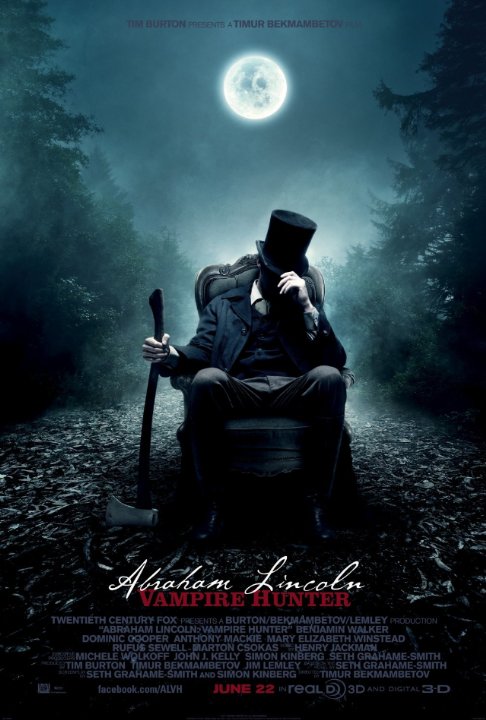 Plot: After the death of his mother at the hands of vampires, Abraham Lincoln vows to hunt down the undead bloodsuckers and the slave-owners who help them. -- Chris Kavan

Everything happened so fast but the scene with horses was really cool. Nice action, closing credits too!

I can see some people having fun with this - but I found it way to schlocky, plus the effects were pretty terrible. There's no standout actors or overall driving theme - just, as the tiles suggests, Abraham Lincoln (both young and old) taking out vampires. If that sounds like it will float your boat, by all means check it out - I think once is enough for me.

Young Abraham Lincoln's mother is murdered by an undead fiend which leads to his lifelong quest to rid the world of the vampires who have colonised the South and feast upon its slave population.

As you can tell from this utterly preposterous synopsis, Abraham Lincoln: Vampire Hunter is not a film that anyone in their right mind could take seriously; apart from its makers, of course. I watched the film expecting a joke-laden spoof, but bizarrely it takes itself rather seriously. Feeling very much like a modern superhero film packed to the gills with the kind of speedy-uppy-slowy-downy CGI-laden visual effects that already look extremely dated, it's an absurdly po-faced action/horror hybrid that is astonishingly misjudged. The writer may have considered the analogy of slavery as …

The premise of a historic figure becoming a vampire slayer is ludicrous, the the creators were very serious about this. Some ideas such as this clearly need some sort of humor injected, since it is already fictionalized, why take yourselves seriously? Has the feel of an Underworld and Sleepy Hollow, but lacks the entertainment value and appropriate story telling. Abraham Lincoln (Benjamin Walker) tries to avenge his mothers death. Lacks sufficient character development for the antagonist, which makes the final battle uneventful. The mixture of history, horror, action and fiction just was not presented well, especially in the story telling department. Not at all that bad because of the stylish direction and violence, if only the screenplay were better. Overall, Abraham Lincoln: …

"A man only drinks too much, if he either has to kiss a girl or kill a manâ¦â¦â¦What are you going to do, young man?"

The film opens with Abraham Lincoln on a voice-over talking about how History prefers legends to men, then flashes back to his childhood when young Abe witnesses his mother being killed by what seemed to be a vampire. Now in his twenties the desire to seek vengeance on the ghoulish murderer has never diminished. After a botched attempt our spirited yet naÃ¯ve hero meets a vampire-killer named Henry Sturgess (Dominic Cooper) who trains him in the killing craft using his weapon of choice, the axe. Lincoln begins slaying the vampires that Henry directs him to.

its a ok movie. the main problem is the silly concept of abraham lincoln they should of called it something else and just had the movie as some ole time vampire hunter then it would be a ok film.the problem is its such&amp;nbsp; silly idear yet such a serious movie which makes you think wtf.some of the effects were poor as well but generally its alright

I'd suggest not seeing it. &amp;nbsp;I think I was too kind in giving it a 2/4 rating. &amp;nbsp;It's too serious for the premise and the action is just a bunch of flashy, slo-mo, CG crap.

I'll probably stream it when it comes available, but I just don't see how this will turn out to be good. I'll reserve final judgement until I watch it.

I really think you would like it. I do agree I was very skeptical too. and I know the idea sounds absurd but you should really watch it because I really liked it. It's so much more than vampire killing. The symbolism of the vampires definitely relates to history.

They are looking to attract an audience that likes horrible movies. It looks awful.&amp;nbsp;