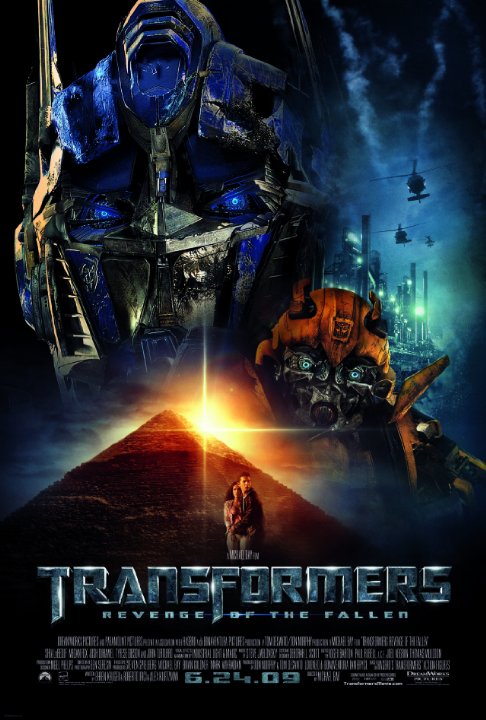 Plot: Sam Witwicky is ready to put event behind him and attend college. When he begins to draw strange symbols, which correspond to ancient designs, he becomes the target of the resurgent Decepticons for the knowledge he possesses.

Complete failure in every way except in the box office where it made a killing. I knew it would probably be bad, but I was shocked at how truly awful it was. I got up out of my seat halfway through the showing and wandered the hallway looking at other movie posters. That's how bored I was. It was really and truly mindless. The actors admitted that there was no script at all because the writers had gone on strike. Yes, it is as bad as everyone says.

oh no transformers 2 his coming out on DVD well it's time to hide under a rock.transformers 2: Revenge of the Fallen. wow this film SUCKED hard.the visual effect's is corner as hell the action just goes on and on.and did you know that I watched this on my birthday and the next day Micheal Jackson is Dead not a good birthday.am going to give this a 1/4 stars "don't watch this or buy this film".

While I love the action/special effects, I cannot bare the rest of the film. Dreadful.

About as funny and cool as an unborn fetus

Admittedly, the first Transformers movie was mildly entertaining, but consisted mainly of loud noises and cars no one can afford. Then the second rolled along... And the third... And now there will be a fourth.
I could write this review on any of three movies, but I picked Revenge of the Fallen, because it is by far the worst. I watched it once in the theater and thought it was okay. Having forgotten about it, a year later I watched it on DVD and couldn't believe the bullcrap that was actually put on screen, financed wholly by Paramount. Here's my theory: They keep making more, because mainstream audiences love these movies. All three movies are in the top 50 most grossing movies of all time, earning back their budget by a billion times. Paramount's …

"Transformers: Revenge Of The Fallen" by Yojimbo

The Decepticons return to Earth under the command of one of the original "primes" to restart an ancient machine designed to cannibalise the sun into an energy source. I actually didn't have a problem with the original Transformers film; okay it was big and dumb and was embarrassing to say the least whenever the characters opened their mouths, but it had loads of well engineered action and entertained on a very base level. As such I wasn't exactly expecting high art from the sequel, but this is dumb with a capital D. Not just dumb, but dumb by MICHAEL BAY STANDARDS. It makes Independence Day look like Shakespeare. Bay obviously just made a list of all the ingredients of the summer blockbuster (explosion, car chase, love scene, exploding monument, fart joke, college dorm full of Playboy …

Transformers 2 got a whole lot of backlash back when it was released, so I really was prepared to give it a big beating, but now it's time to review it, I'm finding it hard to even evoke enough passion to do so. Like I'm too disillusioned by the movie industry if this is the kind of film that makes so much money. It's just sad. So I've decided, for once, to compress my thoughts as much as possible, because other than the following points, there really isn't much to say about this film.

First off, the story. What story? Some robots fight, for some reason. It's boring. Also, the plot is just the most bizarre and nonsensical contraption that I've witnessed in mainstream cinema in recent years (and not in a good way). The plot is basically this (may contain some spoilers, though I …

Despite the messy plot and jumpy locations, I rather enjoyed Transformers 2.&amp;nbsp; I will say the writing and direction lacks creativity, but it is a fun film with outstanding effects.

I agree.&amp;nbsp; I am sure they will make a 3rd one...probably worse than these 2....like spiderman.

I have watched it.very disappointment.

Now it is here!