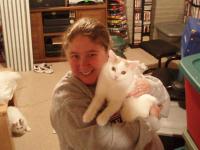 Film I Hate: Well, it isn't nice to hate anything.

Frost/Nixon provides viewers with a superb acting performance, and it will be of general interest to those with an interest in American history. Still, as a film touted as one of 2008âs finest, Frost/Nixon may disappoint. The film recounts the interviews conducted by David Frost of Richard Nixon in 1977 as Nixon sought to rehabilitate his public reputation. The filmâs strongest attribute is not a remarkable story or a probing character study. Rather, Frost/Nixon entrances its audience by the presence of a persona, the curious vibe created when one of the movieâs namesakes enters the room. As Nixon, Frank Langella depicts a man unnaturally detached from the mores and conventions instinctively understood by the rest …

Just saw this last night. What is inaccurate about it? I am not a history buff and frankly, don't know much about Nixon's resignation.

Nice review. I have it on my list of movies to see but I lack confidence in Ron Howard since seeing his last couple of films.

Notice: Send your movie wish list to family - just in time for Black Friday! It's simple and fun. Create your own movie wish list and send it to your entire address book. You can also send other things you are interested such as anyone's movie list or review. Here's a link to get started: Wish List Demo


In addition, the site is now open. Which means your friends, family, and passer bys can read your reviews and view your lists. And with it comes added privacy settings. Simply edit your &hellip;

Great review. Have you seen infernal affairs? It is the same movie as this except hong kong style (at least that is where it was made). Not nearly as good but it also catered to a non American audience at the time. Where would you rank this in terms of Scrosesse's films? My personal preference is in the range of 4-6 with Raging Bull, The Aviator, Taxi Driver (though dated) and maybe even Gangs of New York.

I just wanted to say I really enjoyed your review, even though I am a fan of the movie. I knew going into the movie that it wasn't going to accurately depict the historic battle. I enjoyed the movie mainly for its cinematography, which I thought was really good.

Psssst. You really need to watch Grave of the Fireflies. Maybe I can get you to remove Pikachu from your Least Favorite Genre category 8^).

Is &quot;Presbyterian&quot; really a religion? 8^)

Nice movie list. As a journalism major, I'm ashamed to say I have yet to see Network, though it has been on my list for a long time. An yes, you do need to see An Inconvenient Truth. That and There Will Be Blood, as I just saw it and thought it was amazing.

Yes, 2007 was a great year for me personally. Besides my biased opinion on Sunshine (I love sci-fi) there were several really great dramas out there - most importantly There Will Be Blood, which is an incredibly good movie that could benefit from a larger screen but will be just as powerful on the home front. There were also a lot of other movies that were more genre. Check out my top 2007 movie list for some of the ones I liked.

Add some action to your top 25! Something to get the heart pumping. Right now it looks like a list my grandparents would create. May I suggest the 300? THIS IS SPARTA!