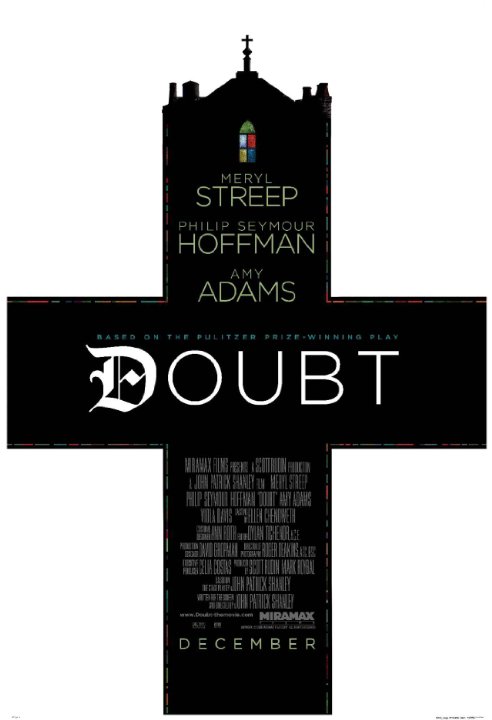 Plot: The Bronx, 1964, a Catholic school has just admitted their first black student. Soon, one of the sister suspects a charismatic priest of having an inappropriate relationship with the student, and the revelation may tear apart the community.

Excellent movie, great acting from all of them, and the excuses the Church makes to cover up the abuses are so well integrated in the movie you just believe them.

R.I.P. Philip Seymour Hoffman. The Bronx, 1964, a Catholic school has just admitted their first black student. Soon, one of the sister suspects a charismatic priest of having an inappropriate relationship with the student, and the revelation may tear apart the community. Meryl Streep, Philip Seymour Hoffman and Amy Adams all do fantastic Jobs in they roles in this brilliant film.

Doubt is a pure vehicle for acting, combining brilliantly written words with a stunning cast. Meryl Streep is, as always, acting perfection, but her intensity is matched by Philip Seymour Hoffman (also always good,) and a surprisingly subdued and haunting performance from the usually bubbly Amy Adams. The film explores a difficult subject without moralizing.

Based on a play, also entitled "Doubt," the film unfolds much like a piece of theater would with the dialogue and actors all in the spotlight. It's in this way that Doubt ultimately succeeds. The performances are all fantastic. Meryl Streep is brilliant in the lead role, while Philip Seymour Hoffman owns as the Priest and Amy Adams shines in a more reserved role; throughout the film, I found myself anxious for the next scene where the 3 would be together because they had great chemistry. Also Viola Davis delivers a great performance, she has only one scene in the film but makes it count by stealing it from the great Meryl Streep. All 4 garnered Oscar nominations. The film also benefits from a really good screenplay. It is never too obvious in delivering its themes and topics, but the …

Acting says it all

Sister Aloysius Beauvier is the principal of the church-run school St. Nicholas, who has her own way of handling and disciplining students. Suspicion arises in her when Sister James comes to her and told her about a particular black student called one day by Father Flynn and comes back to class upset and with a scent of alcohol on his breath. These information, not supported with any other evidence and witness, make Sister Beauvier doubt the priest.

I understand why this movie failed to snatch trophies and awards as a film in general. But what is much clearer is why this particular movie received awards for its commendable actors. Without any doubt, Streep, Hoffman, Adams, and Davis had knock-out performances in here making every scene worth watching. They delivered …

No posts have been made on this movie yet. Be the first to start talking about Doubt!