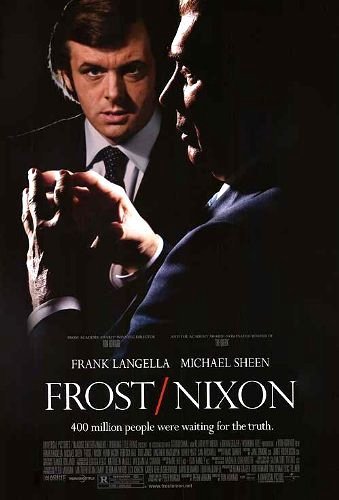 Plot: After three years of silence following Watergate, Richard Nixon agrees to an all-inclusive interview with an unlikely choice of interviewer: British showman David Frost. Each man wants to have the upper hand but all the planning and preparation will come down to one historical interview. -- Chris Kavan

Why didn't you not burn the taps?

This really is a great film. I love that it captures the complexity of not only the Watergate scandal itself, but Nixon's feelings, emotions, thoughts, and regret as well. This is mainly because of Peter Morgan's excellent screenplay; it's powerful and entertaining at all the right moments. Frank Langella and Michael Sheen give really great performances here, and the supporting cast is perfect and rounds the film out nicely. This is a powerful political drama that is also supremely entertaining; it's one of the best films of 2008.

The political background to this drama serves as more of a set-up to a confrontation of two fascinating characters with distinct and separate motivations. Michael Sheen's clever and conniving David Frost is met at each move by the equally devious Richard Nixon (Frank Langella gives a career performance, disappearing into the shoes of the former President.) The film's back-and-forth interview dialogue is great, but so are quieter scenes that portray both characters at their most vulnerable. An interesting character piece with historical ramifications.

In the wake of the Watergate scandal, Richard Nixon is tempted into a televised interview by a huge fee and the assumption of an easy ride from a British interviewer with little political experience. Frost/Nixon can best be described as a political version of Rocky 2, as strange as that sounds. The story is of a fresh faced challenger who, against all odds, takes on a world heavyweight who has little expectation of a real fight. Michael Sheen once again shows his uncanny ability to "become" the character he is portraying, this time talk show host David Frost, but his fine performance is more than matched by a superb performance by Frank Langella who brings a real humanity to "tricky Dicky". It's a story of two men who have everything to lose, Frost his career and entire personal fortune, …

Frank Langella (Richard Nixon) and Michael Sheen (David Frost) star in this historical drama about the life of an ex-President and a talk show host who wants to interview him. Due to lack of funding Frost markets the program to different TV networks but to no avail. He hires Bob Zelnick (Oliver Platt) and James Reston Jr. (Sam Rockwell) to join his team with his producer/friend John Birt (Matthew Macfadyen). The camp of Nixon has agreed to 3 recording sessions with Pres. Nixon and David. The final interview involved grittier issues related to Charles Colson and âthe cover-upâ in which Jack Brennan (Kevin Bacon) eventually stops the taping for his boss not to answer the controversial question. In the end, the truth prevailed and Frost becomes widely popular because of the success …

Between Davinci Code & it's sequel, Ron Howard directed this strong docu-drama about one of the most controversial presidents in the American history. The interview that Richard Nixon gave to the British talk-shows host David Frost in 1977 was seen by Nixon as a means to rebuilt his public image badly damaged by the Watergate scandal. By selecting Frost a non-American and apparent outsider as a interviewer he was hoping to find a more easy or good willing partner of discussion, but he missed the fact that the born-for-TV professional also saw in this confrontation the big chance of his career. The resulting minds fight between the two is the focus of the film.
There is a second and also very interesting plan of discussion here. David Frost was not a political commentator, or even an …

No posts have been made on this movie yet. Be the first to start talking about Frost/Nixon!