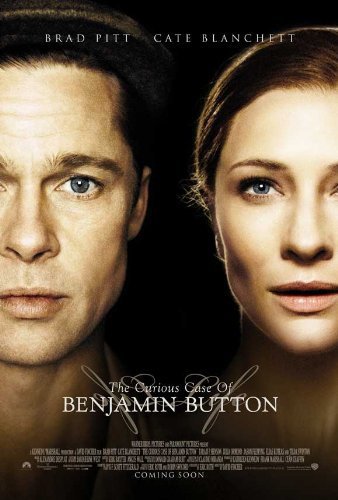 Plot: A man born in his 80s in 1918 ages backwards. As the years pass, he grows younger, encounters love and joy, death and sadness, in a most unusual life. -- Chris Kavan

My biggest gripe with this movie is that it simply is not well made. The writing and acting are bland. There wasn't an interesting scene in the movie. The whole thing is based on the mistaken belief that watching a man age backwards is interesting. It is not. No event from Benjamin's life is worth putting into a film. No discussion he has with anyone is memorable. I truly believe that the only reason Benjamin ages backwards is that he knows he's a boring lump of nothing without that quirk. This movie really feels like it was made by a committee that was so obsessed with making an Oscar-winner that they threw away every risky idea.

Overly long, but brimming with heartbreak and pathos the whole way through, "The Curious Case of Benjamin Button" is a curious coming-of-age fable indeed.

I think the director went backwards when he was writing this movie. This movie is about a man who was born in his 80s in 1918 ages backwards. As the years pass, he grows younger, encounters love and joy, death and sadness. this movie felt kind of shallow movie with a good cast.

"The Curious Case Of Benjamin Button" by Yojimbo

The Curious Case Of Benjamin Button charts the life of a man who was born old and grows younger as times progresses across the span of the 20th century. Based on a short story by "the" great American novelist F. Scott Fitzgerald, Benjamin Button is a film that eloquently captures the magic and charm of Hollywood from times long past. It has a warmth, gentle humour and charm that is sorely missing from most of the sentimental slop that is produced these days and is truly stunning to look at. Brad Pitt gives a much softer edged performance than I thought he was capable of and is wonderfully supported by Cate Blanchett who perfectly captures the gradual maturity of age from self absorbed hedonist to rounded and worldly wise matriarch. The "life story" format draws obvious comparison to …

Fincher and Pitt team up again for a Masterpiece @

"Life isn't measured in minutes, but in moments" is the exacting tagline of The Curious Case of Benjamin Button, and while the fantastic story of a man that ages backwards (the titular character played by Brad Pitt) is hard to swallow, it entertains while being surprisingly relevant and unshallow.
The versatile David Fincher, who also directed Pitt in Fight Club and Se7en, made Benjamin Button as lengthy as his other fab film Zodiac, but he keeps you occupied with the sumptuous visual design and smoothly executed special effects that don't steal the characters' thunder. After all, it's the cast that not only assured box-office draw but also made sure that you are emotionally engaged.
It's difficult not to feel for each one of them. As his life is played all throughout, you will share …

The Thought-Provoking Case of Benjamin Button

I had an odd reaction to this movie. As I watched the film, I found the premise interesting, but I thought it moved very slowly. When the two time-crossed lovers finally have their all-too-brief life together, I became very angry at Benjamin's decision to leave his lover and young daughter. Why would he do this? It wasn't like he was going to die in a week or month... he still had plenty of time to share with his family.

For 24 hours after I watched this film, I thought about this. I thought about how fragile life is for all of us. I though about how Benjamin developed dementia, and had to be cared for... it didn;t matter in the end whether he was very old, or very young. Most importantly, the movie made me think about many of these issues.

If I had rated the movie …

I don't think this will meet my expectations.&amp;nbsp; It looks really good - pairing up Pitt and Fincher for the 3rd time.&amp;nbsp; What could go wrong?