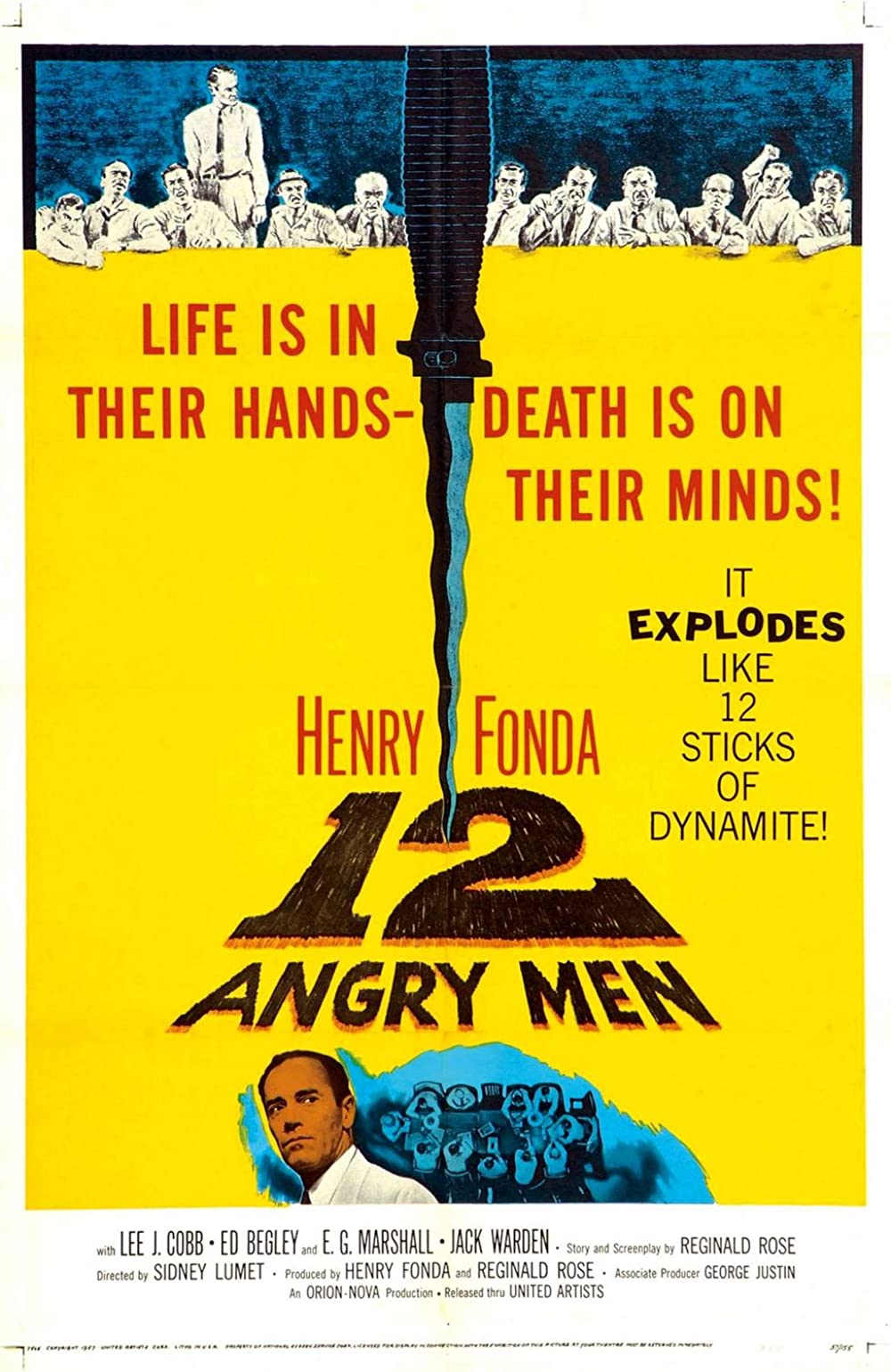 Plot: One man on a jury stands alone in a case in which most are initially convinced one way but one by one may be convinced another way.

Intelligent; perfectly constructed courtroom drama which talent solely relies on the unsurpassable screenplay by Reginald Rose and its highly skilled performances, hence the splendid cast. Sidney Lumet is more often recognized because of his great movies in the 70s; nevertheless, he raised the bar with 12 Angry Men, an objective, focused and absolutely absorbing feature with interesting treatments of the racism topic. 98/100

Twelve men, one room, one decision. A conflict of words that is masterfully written. The characters and their central argument are engrossing and satisfying.

Such a classic film

The power of movie dialogue really makes this movie a true classic.

The story to 12 Angry Men is one man on a jury stands alone in a case in which most are initially convinced one way but one by one may be convinced another way.

12 men in one room just talking about one murder case and them sharing they opinions if the person that may have committed murder is guilty or not, now many things here could have went wrong, you got to have the best writer, the best director and the best actors to make this movie work and it payed off so well and I think this is cinema's greatest risk of doing something new with the story, giving it a twist and a edge and 12 Angry Men paid off brilliantly.

The acting from every singe actor in this movie all do realistic, believable, funny and serious …

A 'classic' worthy of its status.

A very dialogue heavy film can go one of two ways:
1. Be extremely boring.
2. Be extremely interesting.
And I am glad to report that 12 Angry Men falls into the latter category.

12 Angry Men is a movie that I was not ambitious to watch. It was placed very high on the IMDB Top 250 list, and when an older movie is praised that much I usually end up not liking it as much as others (Citizen Kane). But I am so glad I decided to watch this movie.
The script, the acting and the delivery of dialogue have got to be the strongest points in this film.
It feels like an empty room and twelve men come in and fill it with their incredible acting skills and great personalities. That's as good as I can describe it.
I cherish movies that have many limitations, but still manage to work with what …

A true American classic, 12 Angry Men is a movie that stands the test of time. It's message of fairness and stance against prejudice is just as relevant today as it was in 1957 when the film was released. This is a film about right and wrong and Henry Fonda's Juror number 8 is one of the great heroes of film. Lee J. Cobb is also fantastic in the film, vigorously defending his belief that the defendant is guilty to the point of nearly brawling with the other jurors. Cobb's juror hits home with this reviewer. How many times have you thought somebody was guilty and then was acquitted? Cobb's juror is one of us, a regular man who gets caught up in the hype. Despite his loud mouth and menacing presence, he too is standing up for what he believes in, even though it may be morally wrong. …

No posts have been made on this movie yet. Be the first to start talking about 12 Angry Men!