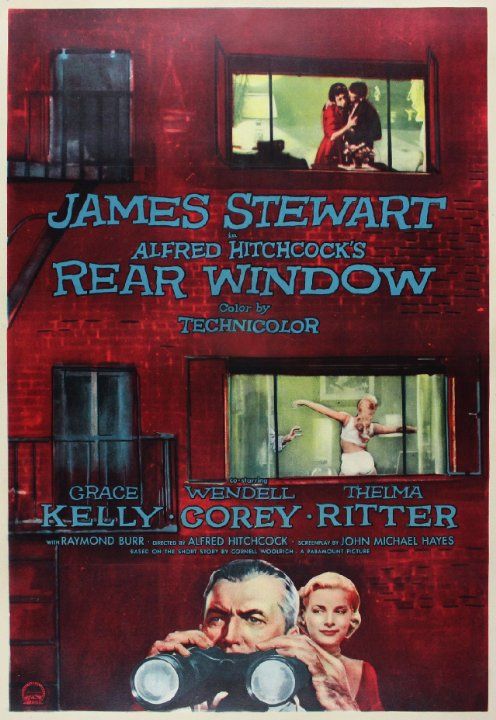 Plot: A man confined to a wheel chair (James Stewart), has nothing to do except spy on his neighbors. As time goes on, he is convinced they have committed murder.

An excellent Hitchcock thriller. It takes you on an thrilling ride without ever leaving its single apartment setting.

Exceptional, extraordinary; in a word: brilliant. Few films have remained in a single filming location and still provide a solid story to be told in a fully absorbing way. Hitchcock is at the top of his game, reaching the suspense and cleverness level of a Stephen King novel where the small elements are the ones that matter. More than influential, more than classic, this is a superb, claustrophobic and psychologically suspenseful masterpiece. 97/100

The film is about a man confined to a wheel chair (James Stewart), has nothing to do except spy on his neighbors. As time goes on, he is convinced they have committed murder. This movie change the way I think of mystery's because this movie was excellent in may wonderful ways.

Alfred Hitchcock truly is a master of suspense, because this movie has a lot of itâ¦ almost too much of itâ¦ it's interesting, but it gets boring.

Rear Window is one of the first Hitchcock movies I saw, and I have mixed thoughts about it.
To name a few positives: I love Jimmy Stewart. The guy is purely charismatic and funny, and he makes his character stand out in this movie. He has so little to work with and so many limitations due to his character's physical state, but he pulls it off.
Grace Kelly and Thelma Ritter were likable side-characters, but they mainly served the purpose of helping Stewart.
The direction is also a definite stand-out, with many wide-angle scopes of a Greenwich Village neighborhood block.
I mentioned limitations before, and this movie truly is full of …

This is perhaps the most disappointing film I've seen all year. Despite brief moments of brilliance and a clever premise, Rear Window is a confused, often tedious, and mostly uninteresting thriller. The film's suspense is all contained within the last half hour, though much of the suspense is diluted through obvious character oversights and a curiously stupid villain.

L.B. Jefferies, a photographer, is confined to his apartment after breaking his leg on the job. With nothing else to do, he passes time by spying on the neighbors through their windows from his room, as he has an excellent view. But things get interesting (at least for Jefferies) when he notices suspicious behavior from one of the neighbors. Jefferies believes there to be a murder, but …

Be careful looking out the window!

James Stewart stars as L.B. Jeffries, a war photographer confined to a wheelchair who spends the better part of his days viewing the many happenings of his neighbors across the way from him, via binoculars and zoom telephoto lens and camera thanks to his rear window which has a perfect view of everyone there. It's like watching about 15 different soap operas at once.

His only contact with the outside world arrives in the form of his nurse, Stella (Thelma Ritter), and female friend Lisa Fremont (Grace Kelly), a rich socialite who has a romantic interest in Jeffries.

As Jeffries watched neighbors, he becomes suspicious of Lars Thorwald, (Raymond Burr), a salesman with a wheelchair-bound wife who disappears suddenly on a rainy night. Clues he pieces together from his voyeurism …

No posts have been made on this movie yet. Be the first to start talking about Rear Window!