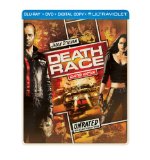 Plot: A man who is accused of murdering his wife is sent to a jail when havoc often breaks loose. When he begins to win jail fights a sexy women approaches him with an offer to win his freedom...in a death race. He takes the offer to drive in a race where cars have rockets, grenades and other apparatuses attached. He must fight for his life with potential friends to ensure his freedom in the end.

This film is about a man who is accused of murdering his wife is sent to a jail when havoc often breaks loose. When he begins to win jail fights a sexy women approaches him with an offer to win his freedom...in a death race. He takes the offer to drive in a race where cars have rockets, grenades and other apparatuses attached. He must fight for his life with potential friends to ensure his freedom in the end. This movie is over the top silly but I have to be honest I enjoyed that it. The characters are bland as old wood but the action may be all over the place but I enjoyed it.

now i must indmit.i cactually found myself enjoying this film.now yeah,the film has bad dialogue,chessy plot,cheesy acting,cheesing character development.and the list goes on.but come on,who goes to a film called "death race" and expects Quentin Tarantino dialogue and Martin Scorsese characters.this film was really fun and entertaining.Paul W.S. Anderson may not be truly a great filmmaker,but he does know how to creat fun films for all to enjoy.not to mention the great action car sequenses were very fun and intense.

Nothing about this movie is good other than the really loud action scenes. If you are wanting to see something that is pure action, not good, and nothing comparable tot he bad action movies of the 80s, see this one. Not horrible though.

An ex racing car driver is framed for the murder of his wife to impersonate the dead star of a gladiatorial game show of the near future. His name was Frankenstein, which is ironic, because this is a cinematic pick'n'mix of many cult sci-fi movies. It has the story of The Running Man with shades of Mean Machine, the themes of Rollerball, the environment of Escape From New York and the style and action of Mad Max. Original, it most certainly ain't. It has the usual trappings of the modern action movie, namely characters who are the inevitable mix of gang banger stereotypes and hotties and it's over directed in the way that has been de rigeur over the past few years, all set to an appalling pop music soundtrack. As a whole, it's like watching a videogame adaptation of a game that doesn't …

The story of Death Race follows a man accused of murdering his wife. He is to take part in a race to gain his freedom, and he'll be racing as the role of Frankenstein, a masked racer who was killed on the operating table after crashing during his last race. Although the story was given well and very simple, I hard a hard time following it. Except for high action scenes, I didn't really watch to movie because I found those scenes to be boring. The boring scenes didn't last very long, however, and the action scenes lasted a really long time.

Now the characters were the worst part of the movie. Most of …

Deathrace is a car crash of a movie â you know you shouldnât watch but you canât bring yourself to turn away.

Borrowing little but a producer from the 1975 original, it tells the story of a wrongly imprisoned man who is given one chance to win his freedom; compete in and win the Deathrace â armed and armoured vehicular chaos within a maximum security prison.

The director and writer, Paul W.S. Anderson (just so you donât confuse him with the Paul Thomas Anderson, as if that could ever happen) does a good job with the action but falls flat with the script. Some of Joan Allenâs lines are among the worst you will ever hear. Jason Statham does many physically impressive things while still managing to look like heâs trying to solve a crossword puzzle (his singular talent) …

I will probably wait until after awards season to see it.

Death Race 2000 all the way! That's your classic cult film. From the previews, I don't think I would get much out of this new Death Race, Statham or not.But I will most likey watch this when it gets to cable.

dude, teletubbies would be awesome with him in it! Is that show still on. but I think Death Race is going to pale in comparison to Death Race 2000