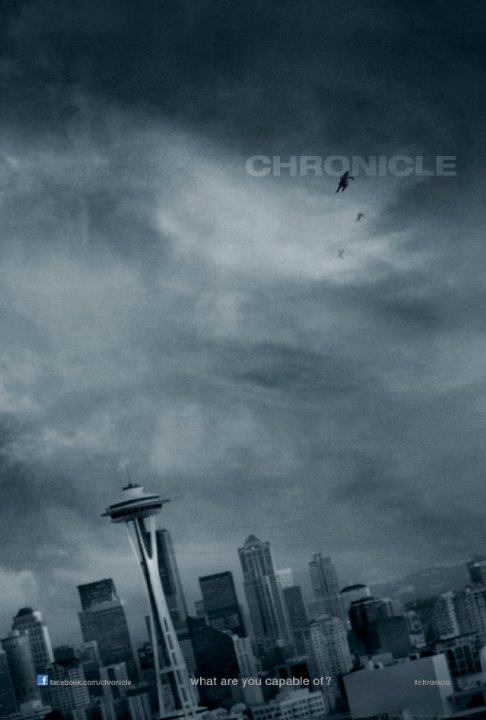 Plot: It's superhero-meets-found-footage when a trio of teenage friends suddenly gain superpowers after coming in contact with strange substances. But problems arise when personal issues throw them into conflict. -- Chris Kavan

I wish I had super powers ok this is chronicle now is this film good or Bad well I can say that it's so far the best movie of 2012. I enjoyed this film some parts are like cloverfield am going to give this a 4/4 stars "Great movie".

With the superpowers they have and the situation they were put in (good vs. evil); I expected A LOT more from this movie than what I got. It was a very weak and shallow movie, as I felt I barely watched anything by the end. Great plot, terrible execution.

I am sick of "found footage" style movies. I have a few that i really like, but this is not one of them. Would have been better as a standard movie. A cool concept that was paced well, surprisingly well directed and written. Can't wait to see the next flickk these guys do.

A trio of high school seniors stumble upon a strange underground object and shortly after coming in contact with it, they each develop telekinetic powers. While the plot sounds like something out of a 1950âs âBâ movie, âChronicleâ plays it straight and earnestly â leveraging hand-held movie cams (think âBlair Witch Projectâ or âCloverfieldâ) to amazingly great effect in this 83 minute film.

Newcomer, Dane DaHaan, appears as Andrew Detmer, a somewhat dorky and reclusive teen who has a terminally ill Mom and an abusive Dad. As we meet him, heâs taken to recording the events around him with a video camera. His cousin, Matt Garetty (Alex Russell) works to get Andrew to loosen up and be part of the good times of their senior year. Also thrown into this mix is Steve …

For those who have been dying to see the upcoming live action Akira, well, you already missed it, Chronicle was that movie. Although the "found-footage" style can be annoying at times and creates some plot problems..(why is the guy still holding the camera when all this craziness is happening???) the film is pretty good. In your classic vein such as E.T. etc.. a group of youths find an abandoned space artifact and are imbued with telekinetic powers. Several of the kids decide to use their powers for good or just to have harmless fun, but one of the group holds a grudge against classmates due to bullying issues and decides to take revenge. The whole thing spirals out of control and turns into a showdown with the government and police. The story is very reminiscent of movies like "Push", …

When i saw the original trailer for this film i thought the concept looked cool enough. You have three highschool kids who accidentally stumble upon a meteroite of some form. Cool as that is it gets much cooler as they all discover they now possess super powers mostly of the telekinetic variety. So i threw my money down and purchased the dvd upon its release and damn!!!! What i did not expect to get in return was one hell of a movie! Definatly without a shadow of a doubt one of the best movies i have seen in 2012 so far! Loved the storyline, loved the relative cast of unknowns, also loved as its filmed 'Blair Witch' style without the vomit inducing shakiness which after reading alot of reviews for this film seems to be a problem...I think it added the reality to it!!

No posts have been made on this movie yet. Be the first to start talking about Chronicle!