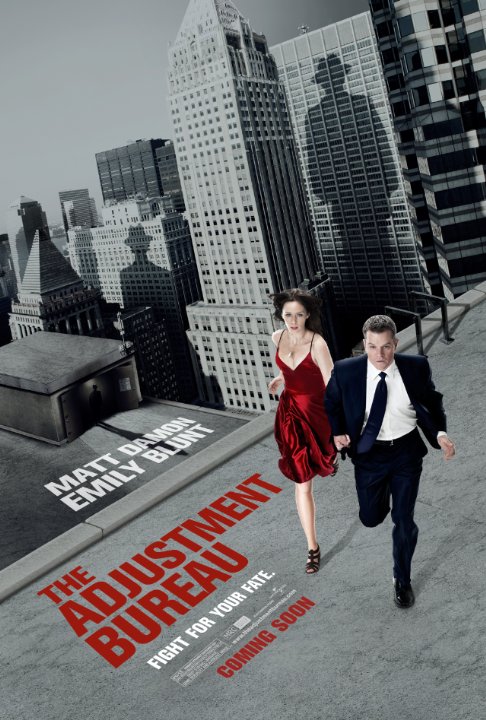 Plot: A politician on the verge of winning a Senate seat meets and falls in love with a ballerina, but as he pursues this love, a mysterious group of men conspire to keep them apart - they are the agents of Fate - the Adjustment Bureau - and they will stop at nothing to keep order. -- Chris Kavan

This movie is about a a mysterious group of men conspire to keep them apart - they are the agents of Fate - the Adjustment Bureau - and they will stop at nothing to keep order. I really enjoyed this film, I liked the story and the directing.

Look past the film's Dionysian views of love and fate, and you will see a rather creative little love-story about two likable and charismatic people whose love cannot even be broken by the angels themselves. Stupid, but often creative and novel.

I thought this movie was ok. I thought it had a good idea, but they could have done more with it. In the end I expected a little more, a twist or something, but I didn't really get one. It was just pretty typical. A happy ending you couldn't help but see coming. It was still worth the watch though. It's basically about the people that make sure no one wanders off their pre-determined "plan". They make sure things happen that make things happen that make other things happen. A guy and a girl see each other a lot more than their plans want them to and the Adjustment Bureau comes after them.

"The Adjustment Bureau" by Yojimbo

A senatorial candidate meets the woman of his dreams but an enigmatic organisation of men in black keep interfering in his life to keep them apart. The movie poster for this film contained an earnest looking Matt Damon in full Bourne pose running through a surreal cityscape, a clearly premeditated attempt to dupe the male population into thinking that The Adjustment Bureau was going to be another Inception style sci-fi thriller. The opening scenes also show some really nice chemistry between Matt and Emily Blunt and when we first see the Bureau, it seems like it's going to be more of a surreal fantasy in the shape of Eternal Sunshine. But don't be fooled. IT'S A ****ING CHICK FLICK. Far more in the vein of City Of Angels, the plot is just the old "handsome and powerful man wants to give …

The Adjustment Bureau Keeps You Guessing

We are all familiar with the common phrase, âEverything happens for a reasonâ. How anyone feels about that statement is always a topic for lively debate. Are we not masters of our own fate? Or is there a greater force at work, behind the scenes, that affects the outcome of our lives? Entire religions have been founded on this simple premise. Regardless of how you feel about this eternal debate, âThe Adjustment Bureauâ [TAB] offers its own take on this subject.

The script for TAB is taken from a short story titled âAdjustment Teamâ, written by Sci-fi author, Phillip K. Dick. Some of his other works were inspirations for high-profile films, such as âBlade Runnerâ, âTotal Recallâ and âMinority Reportâ. Writer/Director George Nolfi (âThe Bourne Ultimatumâ, …

As far as directorial debuts go, this has to be one of the best efforts. Being a real fan of George Nolfi's writing for a past couple of years (e.g Ocean's Twelve), I really looked forward to this one. Plus, it's based on a short story by science fiction legend Philip K. Dick, The Adjustment Team, another good reason to go watch it.

It starts of plainly enough. Matt Damon's New York senate candidate coincidentally meets Emily Blunt's contemporary dancer on the eve of his defeat speech, and an unexplainable bond begins between the two. However, he soon realises, through a series of accidents, that there are powers at work here to keep the two of them apart, powers he cannot understand.

So in a nutshell, it's a romance wrapped together in a bundle of science fiction and suspence. …

The TV spots I've seen make it look intriguing, but it's not my usual choice to see in theaters. If there's enough interest I would go, but it's one I would definitely check out on DVD.

I'm on the fence with this one. &amp;nbsp;It seems intriguing and has a good cast that I'd like to watch, but the trailer just reminded me to much of the premise of the film Dark City. &amp;nbsp;I may wait for the dvd.

Just added it to my Movies To See 2011 list. Looks like it could be a decent spring flick.

I personally love films about secret societies and this film looks like it will be a captivating piece of filmmaking. It is about a secret society that monitors the entire world and makes sure that everything happens according to plan. A passionate relationship between a poltician and a ballerina is interrupted by this organization due to the fact that they are not meant to be together. Sounds like a great story and it definitely has a lot of potential. The cast is excellent. We have Matt &hellip;