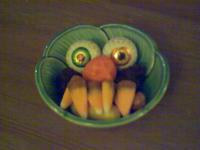 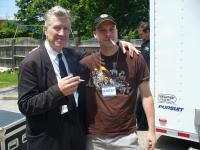 About Me: What is there really to say about me? I love gore, humor, and eccentric characters. I do a pretty good job at being one myself:) And yes, that really is an actual picture of me. All the years of watching terrible movies eventually caught up with me, causing my brain to begin boiling from the inside out. My face slowly began to bubble and peel away, and this is the best that the plastic surgeon could do on such short notice. Oh well, at least now I have a caramel-crispy center.

Interests: Scouring out new/old music to listen to, reading books about film/history/music, as well as fiction, traveling (on my limited budget), watching old movies and wondering why they don't make them like that anymore :)

"It's so damn hot...milk was a bad choice."-Ron Burgundy in Anchorman

"A strange man... defecated on my sister."-Clifford Stern in Crimes and Misdemeanors

"This dude's into metal!"

Terrorvision: I laughed, I was disgusted, but mostly I was entertained! Obviously not a great movie, but it's good campy fun. One unfortunate side effect- the annoying theme song will stick in your head long after the end credits have rolled:(

Thanks a lot! I managed to get my newest film listed. Check it out.
http://www.filmcrave.com/movie_page_main.php?id=29974

Your list just gave me an idea of movies I need to do a review on. Thanks and have a great weekend!