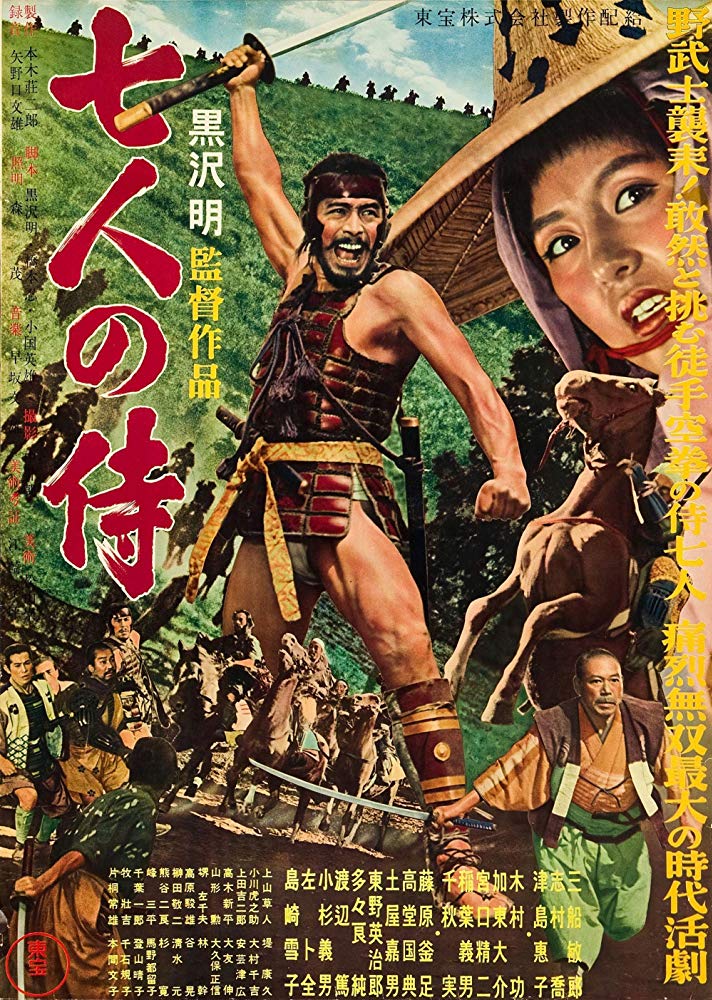 Plot: A village under attack recruits seven warriors to try and protect their village.

This is Kurosawa's epic - a masterpiece that juggles a distinct cast of characters, some interesting drama, and an impressive series of choreographed battle sequences. Despite its ponderous running length, the film never disappoints and continues to remain a powerful combination of humor and action.

The movie that opened me up to more movies. Black and white in another language might be hard for some, but it is worth the watch as this is an amazing piece of film.

Magnificent drama coupled with expertly choreographed sword-fighting was the forte of oriental auteur Akira Kurosawa, but his directorial prowess with this combination had never effectuated such a long-lasting resonance as it had with 'Seven Samurai', a film that rouses laughter, lamentation, and lust for blood.

Akira Kurosawa is one of the most critically acclaimed directors in the history of cinematography, and he undoubtedly became in the most influential filmmaker for the future generations to come since he started to construct his extraordinary and enviable filmography. Kurosawa considerably popularized the samurai genre within the Seventh Art and his incomparable stories achieved to inspire several directors such as John Sturges with The Magnificent Seven (1960), Sergio Leone with Per un Pugno di Dollari (1964), Sergio Corbucci with Django (1966), George Lucas with Star Wars (1977), Walter Hill with Last Man Standing (1996), John Lasseter with A Bug's Life (1998), Quentin Tarantino more notably with Kill Bill Vol. 1 (2003) and Kill Bill Vol. 2 (2004), and Takashi Miike with Sukiyaki …

Let me ask you a quick question: When you're watching a movie, what's the first thing you notice or look for? Acting? Lighting? Color? Shots? Shapes? All of these are just naming a few great elements of what makes a movie so special, as there's plenty more out there that I probably left out, but those are mostly the key ones that some film makers choice when making a movie. But when I watch a movie, the first thing I look for is hidden quality, storytelling by the characters movements, acting, lighting, and the use of silence to add emotion to a scene. And yes, this movie absolutely has all of those things I love in movies and much more. I think I died and went to movie heaven.

A rural village in feudal Japan decides to fight back against the bandits who have been raiding them by hiring samurai from a nearby town. One of the many remarkable things about Akira Kurosawa's astonishing historical epic is the fact that at nearly 3 and a half hours it never drags for a single second of it's length. Not one bit. That fact alone is testament to Kurosawa's incredible skill as both writer and director. The balance of artful visuals and narrative is perfect and every character is fascinating and perfectly played, especially Toshiro Mifune's gleeful and almost feral glory hound and Takashi Shimura's good hearted but wily Ronin. And if like me you still wanted more after its not inconsiderable running time, its Hollywood remake The Magnificent Seven is a damn fine film in …

To see: Again by Alex

Best Japanese films of 3 hours or more by Alan pavelin

No posts have been made on this movie yet. Be the first to start talking about Seven Samurai, The ( Shichinin no samurai )!