Stand by Me Movie Information 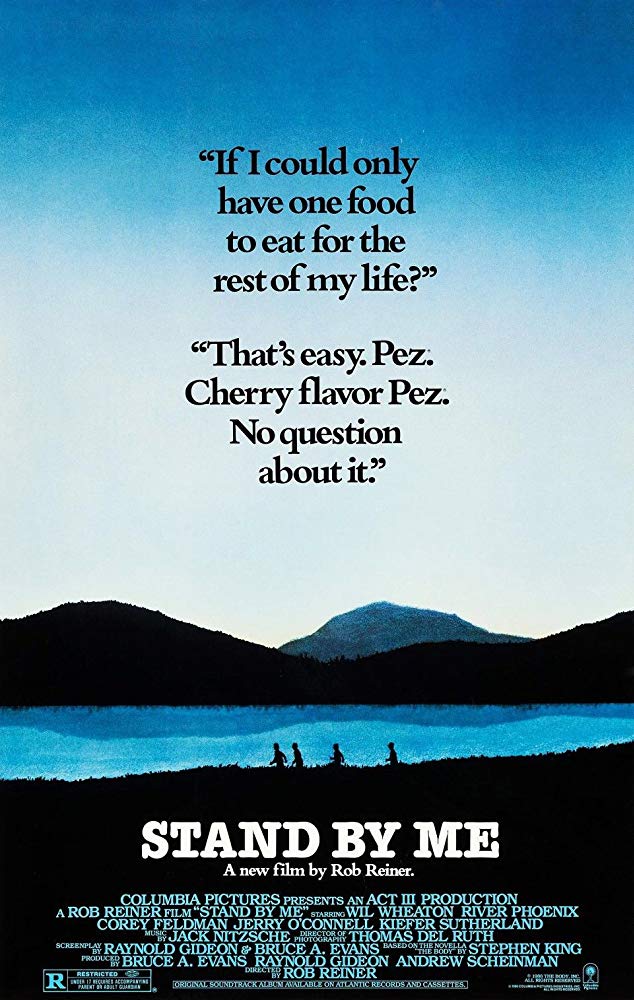 Plot: A group of young friends go on a journey from their home town to try to discover the missing body of a young boy as they encounter real life problems - they put their maturity to the test.

It's dark yet heart-warming, one of the best Stephen King adaptations.

A group of young friends go on a journey from their home town to try to discover the missing body of a young boy as they encounter real life problems - they put their maturity to the test. This movie was touching and enjoyable to watch.

Using a believable young cast, this is the quintessential coming of age tale of the 80's. The film captures the rough-around-the-edges nature of childhood friendship and manages to deal with adult themes through the eyes of children. The film has a certain dark humor to it, but the more poignant scenes land hard. A reminder of the greatness that was the late great River Phoenix also, who is fantastic in one of his first roles.

A Beautiful Coming of Age Masterpiece

This movie struck me straight in the heart. I am man enough to admit that this movie was beautiful. I loved the characters so much. It is so true in every aspect. Never has a movie reminded me what it was like to be in 4th-5th grade. These young actors did such an amazing job that I was blown away. The characters were done perfectly. Each character represented every personality that I have had in my group of friends. Chris is one of the most likeable characters to every be in a movie. He is just so real and cool, but compassionate. I cannot wait until my son is old enough to understand this film. Everyone should see this film before they die. Many have tried, but all have failed to come close to this film. To be 13 again. Truly beautiful. A masterpiece.

Stand By Me review

This memorable picture started my inquisitive nature and curiosity in the medium of film. It was my first movie experience in an actual theater. The story revolves around a shy Gordie (Wil Wheaton), mature Chris Chambers (River Phoenix), eclectic Teddy Duchamp (Corey Feldman) and chubby Vern Tessio (Jerry O'Connell). The four individuals discover a dead body and embark in an adventure. Its screenplay was exceptional with lines from the movie: Gordie â âI never had any friends later on like the ones I had when I was twelve. Jesus, does anyone?â âYou can do anything you want, man. â Chris â âYeah, but so what? Everybody's weird.â The soundtrack was wonderful and applicable to each scene while the performances were realistic. It had a good mix of dramatic and humorous …

"Stand By Me" by Yojimbo

Four youngsters hike across country together to find the body of a missing boy. A right of passage drama based on a novella by Stephen King, Stand By Me is an affectionate snapshot of boyhood and life in fifties America. Much loved by many, I found this film to be rather lightweight in content, being overly reliant on its likable leads and an enjoyable soundtrack of contemporary hits. It does have a nice sense of period and director Rob Reiner shows a sensitive hand with his actors coaxing fairly believable performances from his young charges. The flaws for me were in the writing (surprise surprise); River Phoenix character seems rather too responsible and adult for a twelve year old which also gives his pivotal scenes with Wil Wheaton a rather disturbig Brokeback vibe. King's attempts …

No posts have been made on this movie yet. Be the first to start talking about Stand by Me!