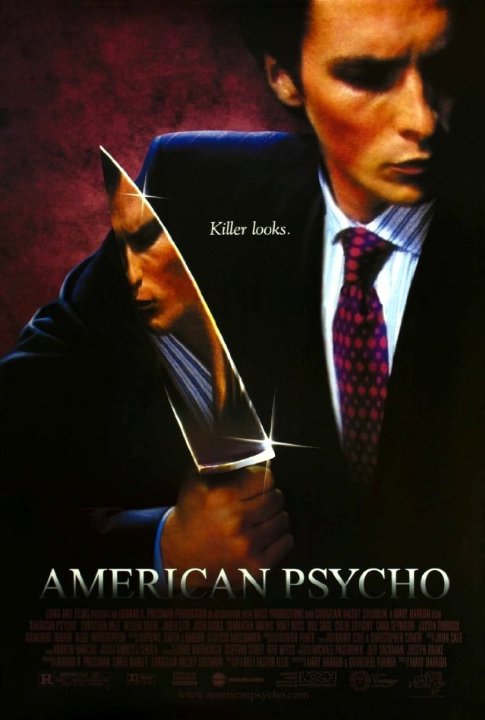 Part "Wall Street," part "Henry: Portrait of a Serial Killer," "American Psycho" reimagines the world of 1980s yuppies and lets Christian Bale give his most sadistic performance ever.

Bale is good, the music is great, but the story sucked. Just coasts along without any real delivery or substance. Disappointing is the nicest way I can describe it.

the story is about An eccentric, wealthy, NY business man finds he can't control himself. An extremely 80's view on economics, music and culture. this movie is funny dark, drama, movie.

Hidden beneath the horrific murder scenes and graphic sex there is a clever poignant comedy in American Psycho.

âHiddenâ may be the wrong term here, because Iâm honestly not sure how anyone could miss the perverse dark comedy in the performances and scenarios. Christian Bales performance alone is both humorous and kind of intimidating, he isnât a real serial killer, and heâs a parody of a serial killer. He is also a parody of 80âs businessmen and just masculinity in general. There are also some silly scenarios like the scene were Bateman (Christian Bales character) is nearly thrown in to a murderous rage over business cards. All in all this is, at its core, a very silly movie.

Of course all that silliness is on purpose. The movie isnât picking part a deranged …

Vain, empty stockbroker Patrick Bateman juggles his job in Wall Street with his nightly appetite for misogyny and homicide.

American Psycho is a smart adaptation of Bret Easton Ellisâ classic novel which, in the wrong hands, could easily have become a dimwitted gore-fest. Thankfully director Mary Harron saw the book for what it really is; a blackest of the black social satire full of laugh out loud moments.

Christian Bale is excellent as a vacuous yuppie who vents his murderous rage during his soulless quest for material gain and anyone who lived through the hateful and soulless excesses of the 1980âs cannot fail to be amused by its absurdities. He perfectly represents a society that is obsessed with surface appearance and self image, disguising the moral black hole at its …

Wow. What a film!

Christian Bale is Patrick Bateman, a handsome, privileged man with a great job, a good looking secretary (Chloe Sevigny), a beautiful fiancÃ© played by Reese Witherspoon and an immaculate stylish home furnished with only the best which makes me recall a remark he makes. "I experienced a moment of sheer panic when I noticed that his apartment looks out over the park, and was clearly more expensive than mine.'

Unfortunately aside from being a fairly superficial human being Patrick also battles inner demons, demons that sit on each shoulder and suggest that he do horrible things to random people, things involving axes, chainsaws, agony and dismemberment. He kills because he enjoys it; and he has no feelings for anyone other than himself. Christian Bale is absolute genius. He goes from …

No posts have been made on this movie yet. Be the first to start talking about American Psycho!