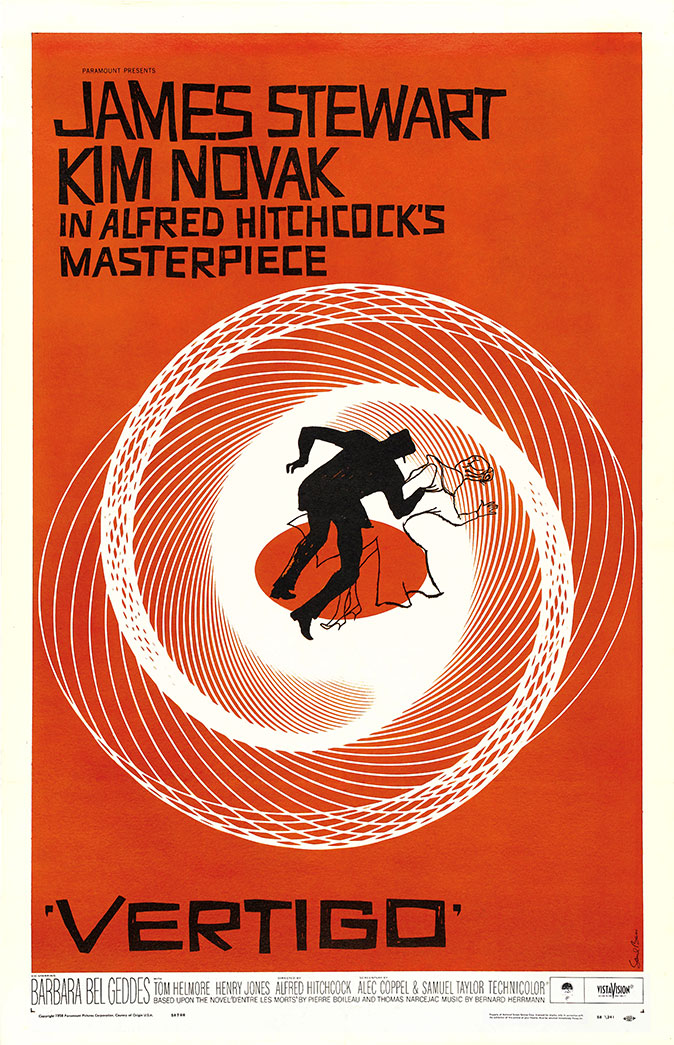 Plot: A man with Vertigo investigates his old friend's wife to discover that she may be the cause of his vertigo.

A definitive Hictcock thriller, "Vertigo" approaches a detective story formula that was quite popular in the 1950s, and touches it up with frightful themes of fear.

Hitchcock masterfully plays with our perception with a spectacularly clever and ahead-of-its-time noirish mind puzzle with top class performances by James Stewart as the man obsessed with the figure of a woman, and Kim Novak as the incarnation of a femme's fragility, yet overwhelming power over men because of our undeniable impulses. Vertigo transcends its genre in an unprecedented manner, challenging cinematic generations to come and establishing new psychological boundaries to be matched (if not surpassed) in cinema history. Full review coming someday... 100/100

John Scottie Ferguson: "Did he train you? Did he rehearse you? Did he tell you what to do and what to say?". The story is about a man with Vertigo investigates his old friend's wife to discover that she may be the cause of his vertigo. Vertigo is one Alfred Hitchcock's best film that he ever did. James Stewart acting in this movie was just pure excellent and nothing can top it. Kim Novak did great in the film to, giving a guilty and a mystery to her character. Vertigo is overall a fantastic thriller with brilliant directing and a great mystery film.

Fragments of a mirror.

There are very few Hitchcock films that I love, although I do like the Hitchcockian style. A blend of mystery, noir and romance, usually topped off with great performances and a surprising ending.
I still think his masterpiece is Psycho, but Vertigo would definitely come in close to number one on a scale of all of his films ranked (that I've seen).

The way the first two acts are put together impress me so much. It starts and you think it's going to be an ordinary thriller, but then it continues and hits you right where you don't expect it to.
I think the title Vertigo has another meaning. It's not only the main character's flaw, but it is also a comment about the film itself. It is constructed in such a way that all of a sudden you don't know what's going on and are plunged into the …

A movie everyone should see

Iâll be honest; Iâve never been a huge Hitchcock fan. Unlike other famous directors he seems to actually have more âjust okayâ movies then great ones. Sure Vertigo and Psycho (and maybe Rear Window, Iâm kind of on the fence about that one) are great. North by Northwest on the other hand is a bloated action thriller (kind of like a 1950âs Jason Bourne,) and The Birds is just a fun horror flick. You sure wouldnât see most of Hitchcockâs flicks get 4/4.

No posts have been made on this movie yet. Be the first to start talking about Vertigo!