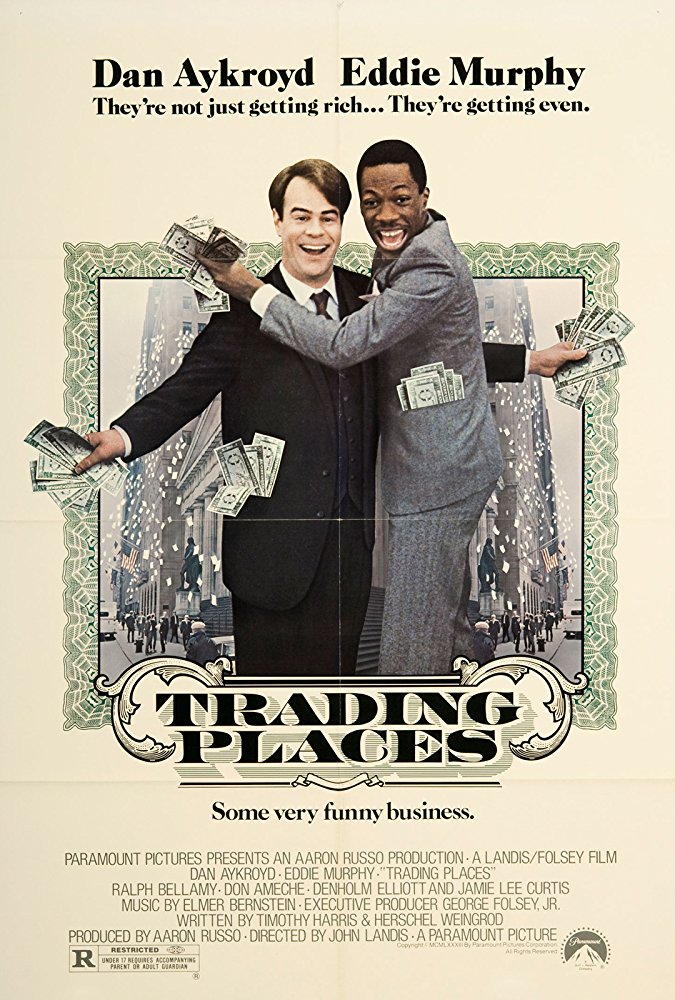 Plot: Two millionaires make a bet to see if they can turn one of their top businessmen to a life of crime and then train an unscrupulous con artist to take his place.

A hilarious comedy from the early days in the careers of Eddie Murphy and Dan Aykroyd.

This is back when Eddie Murphy could turn in raw, comedically full performances. The premise is brilliant and the odd partnership of Murphy and Aykroyd works wonders on-screen. One of the best Murphy 80's comedies, aside from Beverly Hills Cop.

A solid comedy premise, with two solid comedy actors at the height of their popularity and skill. A long setup eventually evened out into some pretty funny situations. I enjoyed a good deal of the two leads opposite 'rising and falling' paths. The changes in their characters are very amusing. The third act hits a slump. The two conspire against their conspirators and the comedy is put on hold for the rest of the movie. Ends in typical fashion. Though, I did learn a little on the chaotic workings of wall-street.

"Money isn't everything." A line repeated to ensure that the viewers take note of it. Duke brothers, Randolph (Ralph Bellamy) and Mortimer (Don Ameche), are wealthy businessmen who plans on making a $1 dollar bet about two people with opposite status in society and its results. The cocky Louis Winthorpe III (Dan Aykroyd) and street conman Billy Ray Valentine (Eddie Murphy) were part of the experiment/bet. Soundtrack was apt and Kamie Lee Curtis was a fabulous support. Unfortunately, only Eddie Murphy's character was funny and the rest seem to wander around the meticulous plot. The R rating doesn't help as well in bringing the entertainment value. Had some nice lines: "One minute you're up half a million in soybeans and the next, boom, your kids don't go to college and they've …

Aykroyd and Murphy at their best!

A successful spoiled, snooty stockbroker Louis Winthorpe III (Dan Aykroyd) has everything he needs, money, a mansion and manservant Coleman (Elliott Denholm - excellent as the humble butler). He is also a member of the Philadelphia upper crust prestigious club and he is about to marry. Life couldn't be better.

On the other side of the community is Billy Ray Valentine (Eddie Murphy), a hustling wise ass con-artist posing as a crippled Vietnam Veteran with hardly any knowledge of the business world and who frequently is in trouble with the police.

When Valentine is one day is arrested for assault, after accidentally bumping in to Winthorpe, Winthorpe's callous employees, the elderly Duke brothers, Randolph (Ralph Bellamy) and Mortimer (Don Ameche) make a wager of the usual amount (1 …

A manipulative pair of wealthy brothers make a bet which sees a small time criminal and a Wall Street stockbroker filling each others shoes. John Landis was one of the most consistent directors of American comedies of the time and here we see Frank Capra dragged kicking and screaming into the 1980s; tits out, foul-mouthed and all. It's essentially a comedy of manners with the underlying message that all men are equal give the same opportunities in life, and the snobbery that often comes hand in hand with privelege takes a pummeling at Landis' deft hand. The rich characters of this film are shown at best to be laughable ninnies and worst, morally bankrupt racists, while Eddie Murphy's ghetto hustler's savvy means he is just at home on Wall Street as he is on the streets. It's one of …

No posts have been made on this movie yet. Be the first to start talking about Trading Places!