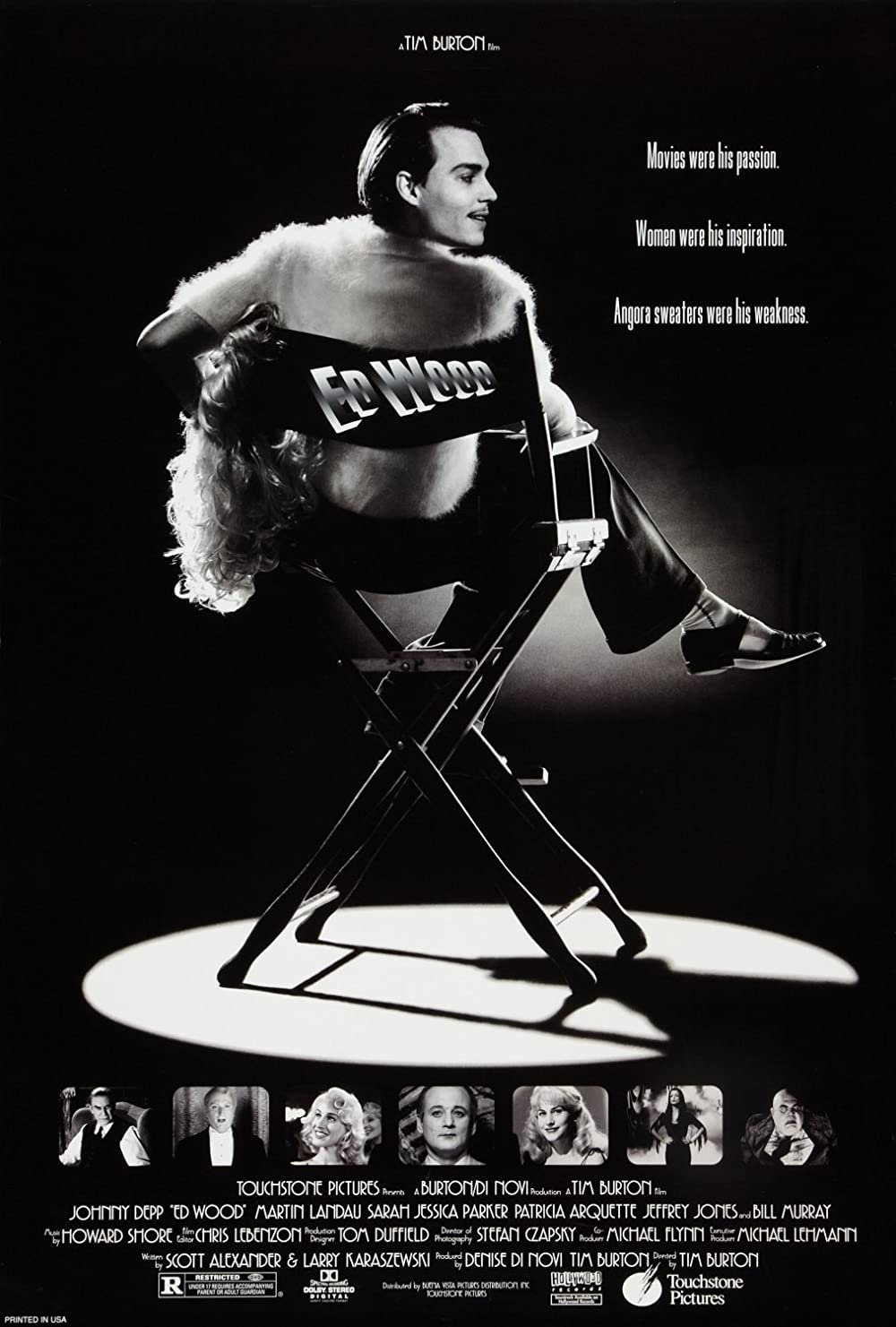 Plot: The life and times of Master of Schlock Ed Wood and his relationship with an aging and drug-addicted Bela Lugosi (which won Martin Landau a Best Supporting Actor Academy Award in 1994).

A great movie about an awful movie director. This is definitely Tim Burton's best film.

This might be the best Tim Burton movie that I've seen in a while.

The only reason I gave this movie a semi-decent rating is because I found Martin Landau's Bela Lugosi to be absolutely incredible. If I hadn't known better, I would have sworn it was actually Bela! Other than that, eh. I certainly wouldn't go out of my way to watch it again. This from someone who's favorite director is Tim Burton and favorite actor is Johnny Depp.

Reminds me why some love cinema.

I know what it's like to be told what you're doing is absurd, but when you're doing what you love, you can't be reasoned with. And no matter what anyone tells you, you will still continue your attempts at what you love. Ed Wood is a perfect example. On the outside, he was a person who made bad movies. On the inside, he was a person mad with finishing every film project he started. Not for the money. Not for the fame. For him, for doing what he loved and for achieving something, his idol being Orson Welles.
I consider this to be Johnny Depp's best performance by far and Tim Burton's best film by far.
It may not be entirely historically accurate, but if you look at it strictly as a study of Ed Wood's unconquerable ambition, it succeeds.
With many close-ups of Depp's …

"This business, this town, it chews you up, then spits you out." Second viewing of this film makes this rater believe it is truly one of Burton's best and a very good Hollywood related film. The movie about a horrendous director who is a transvestite named Ed Wood (Johnny Depp). He befriends actor Bela Lugosi (Martin Landau) and creates films with a bunch of misfit crew. Screenplay was superb with lines from Criswell "Eddie, we're in show biz. It's all about razzle-dazzle. Appearances. If you look good, and you talk well, people will swallow anything," Orson Welles "Visions are worth fighting for. Why spend your life making someone else's dreams?" and Ed "This is the one. 'This' is the one I'll be remembered for." The soundtrack and performances (especially Landau and Depp) were …

Tim Burton was the perfect choice to create this biopic of the undisputed worst ever movie director, Edward Wood Jr., and his affection for and admiration for the man shine through. He is not portrayed as a boob or incompetent, but an ever enthusiastic and infectious amateur who would make any compromise or suffer any indignity just to make his dream of making movies come true. There's a lot of humour to be found in the story with many laugh out loud moments, mostly involving the brilliant Martin Landau who portrays screen legend Bela Lugosi as a kind of foul-mouthed Norma Desmond with a sense of humour. The cast are all wonderful in fact, making a kind of Addams family of misfits and it's very difficult not to warm to them in their struggle to attain the American dream. This heart …

No posts have been made on this movie yet. Be the first to start talking about Ed Wood!