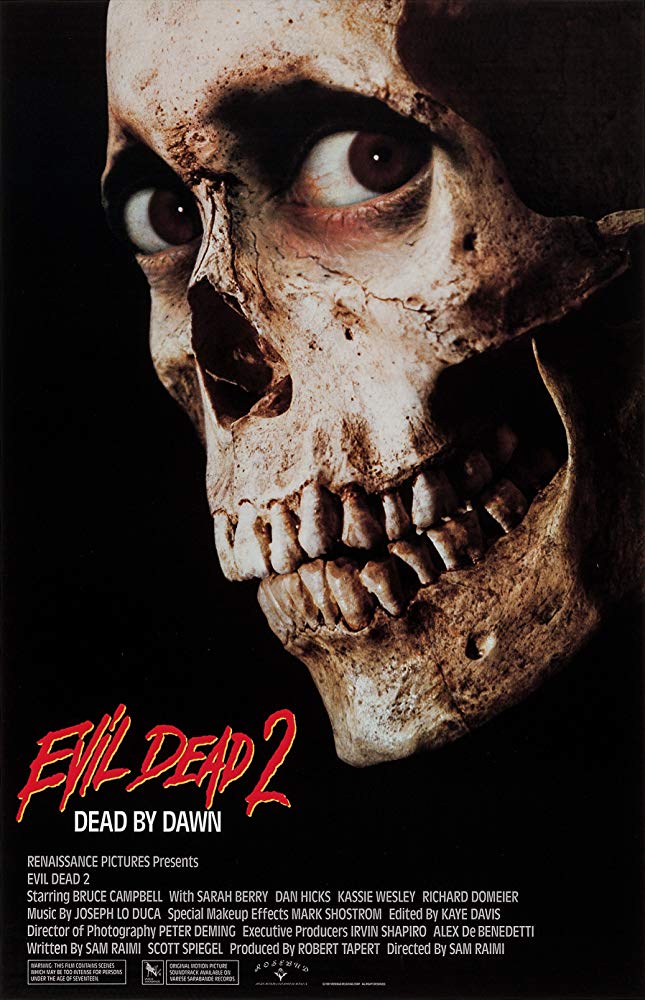 Plot: Ash, Bruce Cambell, takes his girlfriend to a remote cabin in the woods where he finds a recorder. He plays the tape and summons the evil that lurks in the woods.

Just as well made as the first film, but I wouldn't say I enjoyed it as much.

"Groovy". the story is about Ash, Bruce Cambell, takes his girlfriend to a remote cabin in the woods where he finds a recorder. He plays the tape and summons the evil that lurks in the woods. this movie is a dark horror mix with Comedy and you get a great movie like evil dead 2. I liked the movie because the movie starts of with Bruce Cambell in the woods all a lone well not really a lone and all of the demons start to mess with his head and made him go crazy.

The change from full-on terror to tongue-in-cheek silliness is often disjointed in this sequel. The effects are better and so is the acting, but there was something raw and intense about the low budget horror feel of the first film that this movie is missing.

A group of strangers are trapped with a malevolent demonic force in an isolated cabin in the woods. Evil Dead 2 is more of a bigger budget remake of Evil Dead than a sequel and its where Sam Raimi perfected his trademark comic strip style. It's obviously still made on a shoestring by today's standards but the hysterical over-acting and amusingly ropey effects actually add to the madcap vibe of the film that's a bit like a ride on a ghost train through a fun house. It's actually far too silly to be considered scary, relying more on sight gags and slapstick than atmosphere or tension; a lot of the humour is straight out of old school Vaudeville, Raimi including an homage to the Marx Brothers' mirror gag and the plate sequence is straight out of the Three Stooges. There's little in the way …

Ash Williams (Bruce Campbell) and his girlfriend Linda (Denise Bixler) goes inside an abandoned cabin. An evil force is released after a recording has been played by Ash. Annie (Sarah Berry), and her research partner, Ed Getley, return to search more pages of the Necronomicon (Book of the Dead). The dead rise and the trees and cabin get possessed, including ash twice. Some of the effects seem dated, still entertaining and believable. The make-up and acting were splendid, makes you feel for the the figures in danger. Its camera was unbelievable, from the first time the evil spirit tried to roam around the cabin chasing ash, to the sink/floor shots up to the timely and suspenseful close-ups of the door knobs and characters. This reviewer had an enjoyable time with the laughable …

"I'll swallow your soul." "Swallow this."

I can never quite make up my mind which is better: the pure horror of Evil Dead or the horror-comedy of Evil Dead II. Sam Raimi's sequel-cum-remake of his 1981 low budget classic contains several brilliant sequences of outrageous gore and slapstick violence that suggest The Three Stooges by way of H.P. Lovecraft (particularly the wonderful sequence in which Ash's hand becomes possessed and attacks him--one of the finest bits of physical comedy committed to film). In lesser hands this combination could be off-putting, but because the movie runs so far past the boundaries of taste, it never fails to be anything less than a rousing good time. Rarely has so much blood been spilled (and sprayed, and spewed) in such an engaging way. And the moral of the story is: If you have to get a …

No posts have been made on this movie yet. Be the first to start talking about Evil Dead 2!