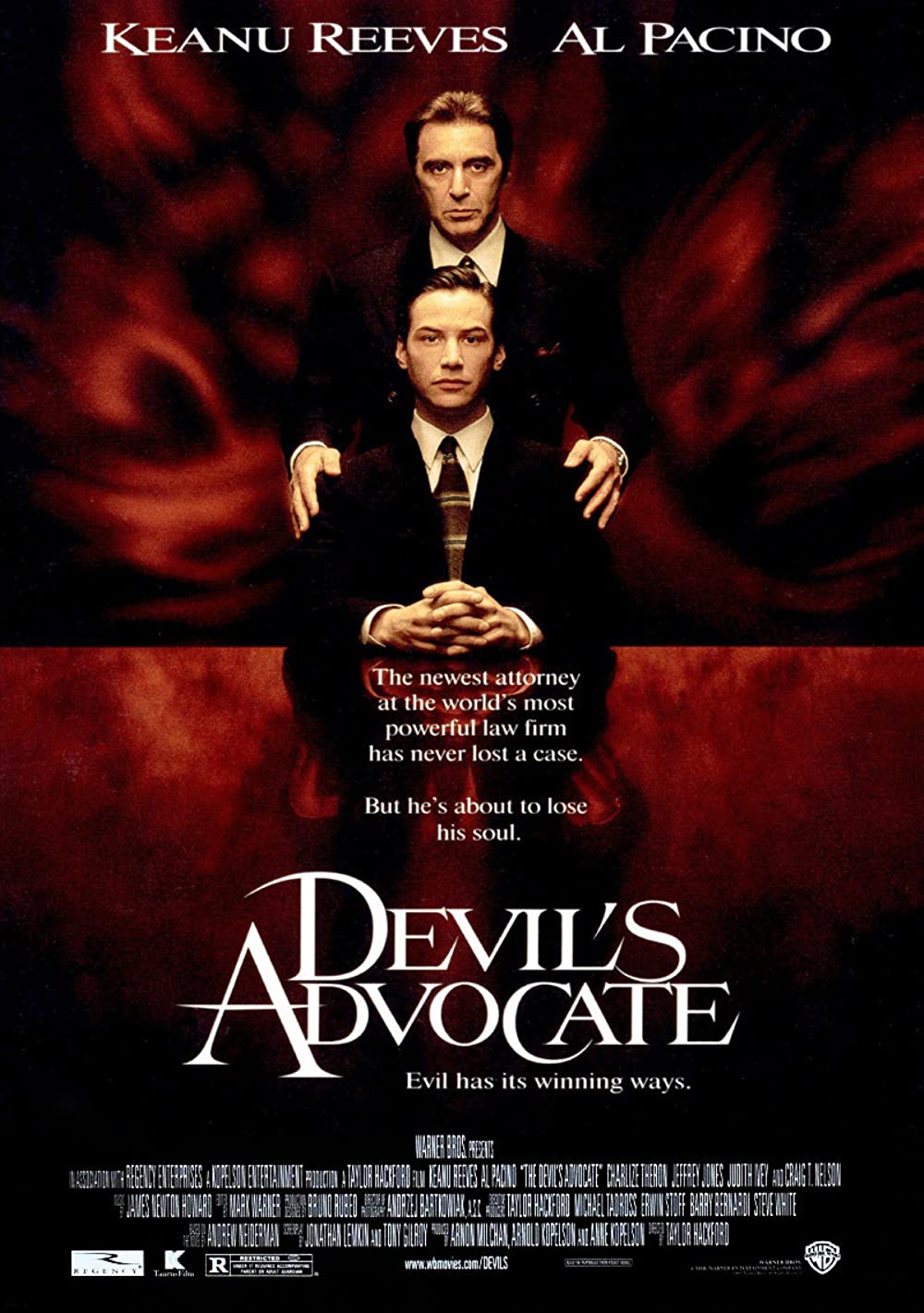 Plot: A new hotshot lawyer gets the opportunity of a lifetime to relocate and join a prestigious law firm. The price he pays is more than he bargains for.

Stylish and unsettling supernatural thriller about a hotshot lawyer (Reeves) who unwittingly is hired by Satan himself (Pacino). Al Pacino is having a blast. New Yorkâs familiar settings like high rises and the subway suddenly transform into otherworldly habitats. Neighbors and coworkers are less friendly than they are sinister hucksters or seductresses. The whole 1990s itself becomes a battleground between wholesome small town values and the dark forces of encroaching urban dwelling yuppies

Al Pacino as the devil... Brilliant. The story is about a new hotshot lawyer gets the opportunity of a lifetime to relocate and join a prestigious law firm. The price he pays is more than he bargains for. Keanu Reeves may not by a good actor as I said it in my 47 Ronin review but he his a likable guy in real life and his acting in this movie wasn't that bad to be honest. The movie feels like end of days but this movie came out two years before end of days came out so end of days is a rip-off of the devil Advocate, The movie has some scenes that could have been easily edited out but Al pacino played a good devil in my opinion.

An interesting horror film that succeeds mostly because of the stellar performances by an ensemble cast. The ghoulish imagery is made scarier by Pacino's imposing performance and even Keanu Reeves manages to approach emotional acting.

"The Devil's Advocate" by Yojimbo

Hot shot Florida defence attorney Keanu Reeves has never lost a case, and so comes to the attention of a New York law firm that is, of course, run by Satan. This is one of those films that has a popularity I've never quite understood; it reminds me of Fallen, in that it's so ridiculous, yet takes itself so, so seriously. Pacino's speeches are more glib rants than insightful comments on the state of man, playing the Devil like a cross between a used car salesman and a pervy uncle at Christmas time, and Keanu doesn't have the range to make this kind of hokey nonsense believable. The gothic style effects just look silly, and the climax is overly melodramatic to the point of being laughable. The only thing that saves the film for me is Charlize Theron; her character's mental deterioration is …

The Devil has many faces!

Kevin Lomax (Reeves) is a brilliant lawyer and happy husband from Florida who takes a case defending a professor accused of child molesting. At some point he realizes that his client is actually guilty but despite his hesitations, he accepts the case, and against all odds, he wins it. This immediately prompts a job offer by a big law firm in NY. As soon as he goes there with his wife Mary-Ann (Charlize Theron) he is immediately impressed and awed by his new firm, and instantly taken under the wing of seductive and charismatic head honcho John Milton. (Al Pacino)

Everything is very fascinating in the beginning, and Kevin and Mary-Ann are enjoying their newly acquired riches, while Kevin is speedily climbing the ladder of fame and success. However, he quickly realizes that things are …

For me, the impact that Al Pacino has on other actors is that they feel challenged, motivated to bring out the best in them. Keanu Reeves performance here is an indication that probably he was infected by Pacino's legendary skills. In any case, the casts here is solid, Charlize Theron's dramatic role here was good. The premise of the film was engaging, if it only had a better ending. The effects were impressive, score was sufficient and script made sense. Unfortunately, Devil's Advocate was not that scary, nor did it have any relevant thriller or dramatic sequences that would make you think. If it wasn't for the effects, acting, John Miltons character and twists, then it wouldn't be that interesting. For people into vanity, influence and aspirations in a negative manner, then your …

No posts have been made on this movie yet. Be the first to start talking about Devil's Advocate!