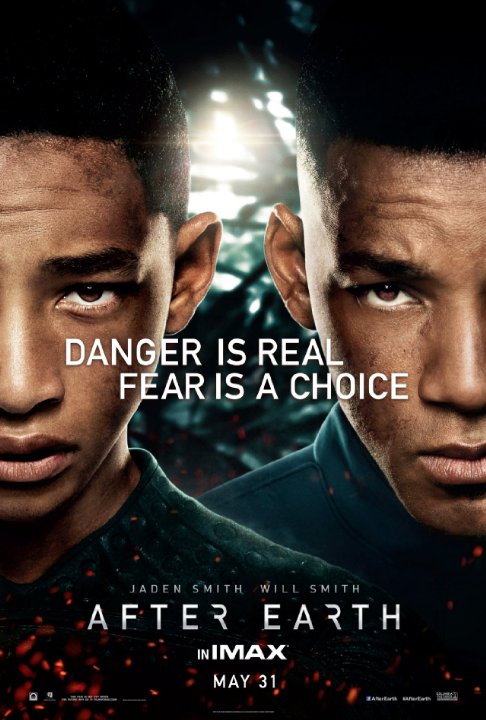 Plot: It has been 1000 years since cataclysmic events forced the evacuation of Earth. Nova Prime is mankind's new home, and General Cypher Raige is ready to return home after an extended tour of duty to make up time with his estranged family, including 13-year-old son, Kitai. Yet an encounter with an asteroid storm forces the father and son to crash-land on the now-unknown Earth - and as General Raige lays injured, and their rescue beacon lost, Kitai will have to become the warrior he's always wanted in order to save both his and his father's lives. -- Chris Kavan

I'm so glad we finally put this whole "Jaden Smith is the next great young actor" delusion to rest after this 2013 spectacle. Although, he's hardly the only bad thing about this emotionless, pretentious slog that doesn't contribute a single fresh idea to the science fiction genre.

This movie was like a crappy video game with long cut scenes. 13-year-old son, Kitai. Yet an encounter with an asteroid storm forces the father and son to crash-land on the now-unknown Earth - and as General Raige lays injured, and their rescue beacon lost, Kitai will have to become the warrior he's always wanted in order to save both his and his father's lives. Okay M. Night Shyamalan has not made some good movie for a long time and I thought this movie might be good but sadly it's not.this movie is really boring and yeah it's better then the last air bender but the movie is still not good.

basically a father and son movie set in the future but ends up back one earth with one alien lol. predictable and boring. and nothing to it. you can tell how bad it is when it promises aliens and you get monkeys chasing the sniverling kid. zzz your not missing anything if you miss this film

A film with no soul

Here is the first scum bag collection of mine in 2013. Night Shyamalan (who gave us a bold Sixth Sense) has given up. His world of futuristic earth lacks compulsion. Shyamalanâs work looks easily the worst here. Will Smithâs story is more like a charred up plastic. So whatâs it all about ? A ship that gets damaged, and has two lonely survivors (hard to believe) Smith and Jade (father son) caught in earth. Jade (rusty performance) steps out to 100 km into deep forest to bring a back up device that will save them. His ambitious journey is not too easy. Shyamalan throws up creatures and a messy narrative. This is time testing. For an adventurous film, important thing is the thrill. After Earth lacks any. Do not believe to be screaming at the monkeys and the birds. Shyamalan lacks his …

We've seen the best on its trailer

Set in a time when Earth is an unfamiliar and dangerous place as humans moved to Nova Prime (mankind's new home), a father and his son found themselves in an adventure challenging their personal relationships and their duties to humanity.

***
DISAPPOINTED. The movie was very promising yet nothing happened. I did not feel the climax, I did not feel any thrill. What I felt was these father and son in real life attempting to make a great movie but their efforts weren't good enough. How I wished Will Smith made so much MORE action than just sitting in a spaceship dying and HELPLESSLY HELPING his son out in the wild.
The story is touching but it fell very short, I thought there were so much to talk about but they refused to and focused on something that audience obviously didn't like at …

General Cypher Raige (Will Smith) and son Kitai (Jaden Smith) are having conflicts at home. The good points of the film were the special effects and acting of Jaden Smith. In this reviewer's opinion, this was a training ground for Jaden to further enhance his acting skills, dueling with his popular dad and some CGI effects. Now for the bad, this felt like a cheap imitation/cross between Star Trek and Chronicles of Riddick. The screenplay was nothing to brag about since it's purely visual when Kitai looses communication with Raige. Plot was simplistic and soundtrack almost no impact whatsoever. These daysâ directors with a resume of hits/quality movies such as Soderbergh and Stone have been taking on a different route. If they made good movies, why not utilize the same formula? …

Will is a support in this one. &amp;nbsp;@ FSUNoles27TS &amp;nbsp;It seems Will is spoiling him on this film. &amp;nbsp;Jaden has a future given the right roles. &amp;nbsp;Karete Kid barely scratches the surface. &amp;nbsp;I still feel Pursuit of Happyness was his best so far.

After Earth better hope for some international success, because domestically it can be considered a failure, not being able to top Now You See Me for the weekend. I didn't think the movie was outright terrible - but it also wasn't that good either. Critics ravaged it and audiences just didn't show up - I think it's lucky it managed to get to $27 million. The theater I was in had maybe a dozen people in it.

Yeah, I dunno Lee. I haven't seen the Karate Kid remake so I don't know how Jaden fares as an Actor. Will Smith is one of my favorite actors in recent years, but it does seem he is stepping back to manage his son's career. This movie will be the deciding factor for the future of his career.

Will is determined to push his son into superstardom...hopefully it doesn backfire on him!!??

The rumor is that Will Smith only has about 20min of air-time. Jaden will be the main actor. Still anticipating a great watch though. And again, just a rumor I heard.