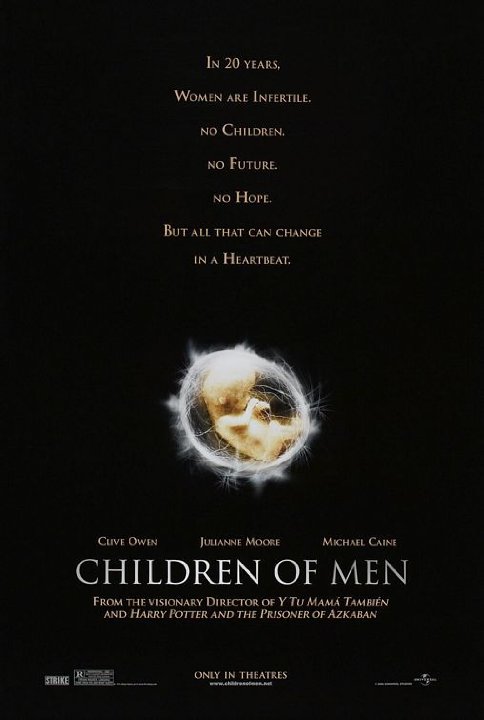 Plot: In 2027 hope for the human race is running thin. There are no children, pregnancies and people have turned on one another. One pregnant woman needs to bear her child to give save the world from itself.

Powerful, emotional, and thought provoking, "Children of Men" shows a future society torn by totalitarianism, destruction, and chaos that is so terrifying it's believable.

A powerful and gripping dystopian thriller with evocative visual imagery and a great performance by Clive Owen. The political and social commentary are remarkably prescient for a film made almost fifteen years ago. The direction of the chases are less like action scenes and more like guerilla combat footage. Children of Men is often a dark story but itâs ultimately a hopeful film about the future of humankind.

One of the best films I've seen! Didn't know this film exist until I searched for Alfonso Cuaron-directed movies. I think this is the greatest sci-fi/war movie ever made. It's sad that it did not receive that much recognition. But really superb cinematography and direction. A lot of jaw-dropping actions and amazing actions that I couldn't even think how the production team create them. Excellent film!!!!

This is not only (possibly) the best dystopian future movie I've ever seen, but it's also one of the most underrated I've ever seen.

Considering this movie landed tons of Top 10 lists of critics in 2006, I should not call it underrated. More overlooked over time.
Alfonso CuarÃ³n is a very dark-toned director with a simple style that I really like. I loved his take on Harry Potter.
The camerawork in this movie is amazing, often are many of them just one shot. That is exactly what I like. No jump-cuts and quick edits. Just letting it roll solidly. A shot in this movie lasts a whole 4 minutes.
This is Clive Owen's best performance (at least his best that I've seen). His character is not only fleshed out well, he is given purpose. He is given emotions and sacrifice.
Julianne Moore and …

"Children Of Men" by Yojimbo

Children Of Men presents a vision of the near future in which the human race has been sterile for 18 years and chaos rules the streets. Terrorist factions war with a fascist state which hunts down immigrants and herds them like cattle into pens and detention slums for deportation. And it's all 100% convincing. The direction and cinematography of this film is breathtaking; you really feel that you are there, suffering with the characters in a world that's degenerated into Hell. Clive Owen's performance is superb as the camera rarely leaves him, his character being the sole focus of the story as he finally finds something to believe in again. On first viewing, I must admit that I found the ending unsatisfactory which marred my enjoyment of the film, but on a rewatch I concentrated on the …

The setting is 2027 in London where no child has been born for 18 years and Britain a military state for detained immigrants. Theo Faron (Clive Owen) has been involved with an activist group known as âFishesâ led by his wife Julian Taylor (Julian Moore). She asks for a favor to bring a female refugee named Kee (Clare-Hope Ashitey). Luke (Chiwetel Ejiofor) has plans for the baby and alters the plan of Julian which involves taking her life. Miriam (Pam Ferris) is a religious midwife who accompanies Kee and is befriended by Theo. Theoâs hippie blithe friend Jasper Palmer (Michael Caine) helps in saving Kee and guiding them to the Tomorrow boat that would lead to the Human Project. Theo and Kee encounter a myriad of dangerous obstacles which involve Luke, Syd and the …

No posts have been made on this movie yet. Be the first to start talking about Children of Men!