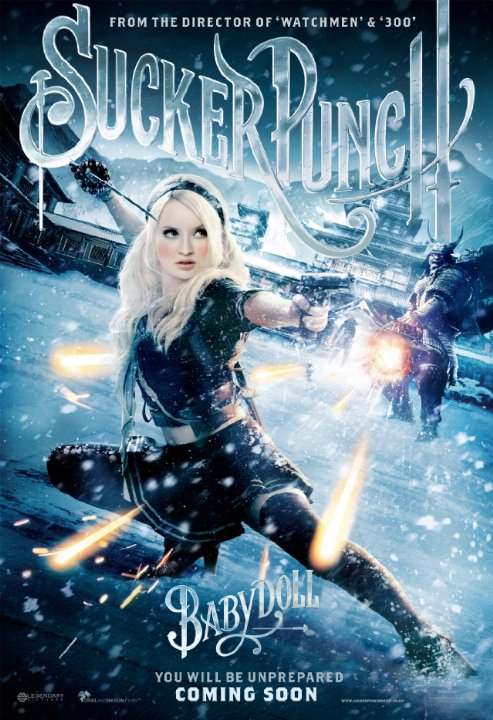 Plot: A young woman confined to a mental institution by her stepfather dreams up an alternate world - one that she hopes will help her escape. -- Chris Kavan

This film was just abysmally bad. Almost no redeeming qualities. This is the worst movie I have ever seen. Spoilers: This movie is extremely sick and extremely stupid. Its basically about these women who get sexually abused a bunch while these CG scenes of them shooting robots happen, and they all either die or are lobotomized. It is a travesty to watch and made me sick to my stomach. The critics also hated it, one guy even said "I'd rather clean the floor of the entire men's room with my tongue than watch this again."

It's an interesting idea, and it's entertaining enough, what with attractive girls being bad-asses in skimpy getups and such, but there isn't much of a story here, and if there is, it makes little to no sense at all.

Coy lines coupled with a monotonous soundtrack filled with remakes of such good songs. Lacked character development (or interesting ones in fact), history of the asylum, war and the girl's abilities with the weapons/supernatural features. The entire film focused on the overly done slow-motion shots which exploits the action instead of a decent plot. Even the ending was impossible, though only thing that salvages film from having the lowest score were the action sequences. Typical style, beauties and flash (visual effects loaded) over substance and logic, Sucker Punch just suckered this reviewer into viewing this. This would be trashy if it were done 10 or 15 years ago. A prime example of style over substance. Not sure what the director's message was, violence for all solves …

A young girl who accidentally kills her sister in an attempt to save her from her evil stepfather is committed to a mental institution and within creates a fantasy world in which she is a heavily armed superhero. If Inception were made by Hugh Hefner instead of Christopher Nolan, you'd have got Sucker Punch. The combination of comic strip violence, computer generated visuals and the "Boss Fight" format is very reminiscent of Scott Pilgrim but the best way to describe this film is it's like someone downloaded a bunch of video game cut scenes from Wolfenstein and Devil May Cry and inter-cut them with Coyote Ugly. The big problem with Sucker Punch is that the scenes in between the set pieces that are set in the strip joint which are supposedly providing the narrative and characterisation …

I thought this would be alot better then it was. The opening segments (that best describe as a music video) were in my opinion the best parts of this film. The director should've stuck with that storyline instead of the potpouri we end up recieving. Basic newcomer Emily Browning (last seen in Lemony Snickett's A Series Of Unfortunate Events) plays Baby Doll in this, who after being framed by her evil stepfather for the murder of her younger sister, gets locked away in a local mental asylum (I know we all have a local mental asylum in all of our small towns dont we? Mine being in the very house i live in haha) after advising along with a hefty bribe to the on site man in charge to lobotomize her in an effort to silence her forever to real events surrounding her sister's death as to which …

No posts have been made on this movie yet. Be the first to start talking about Sucker Punch!