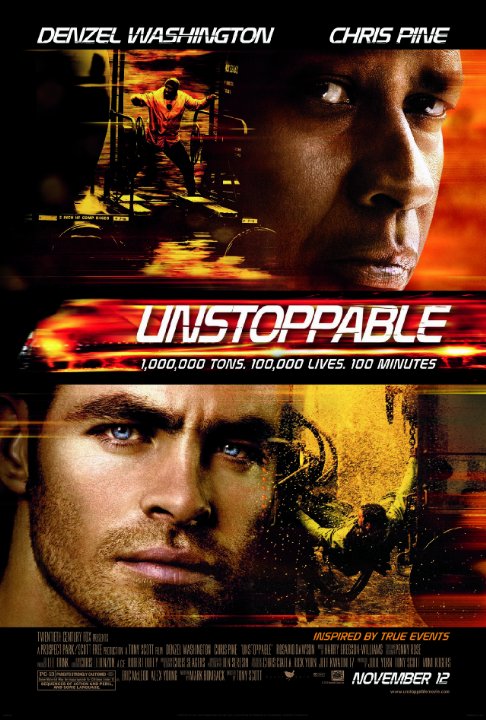 Plot: A runaway train full of highly toxic and combustible material is on a collision course with a small town unless an intrepid engineer and conductor can stop it in time. -- Chris Kavan

R.I.P. Tony scoot. The story is about a runaway train full of highly toxic and combustible material is on a collision course with a small town unless an intrepid engineer and conductor can stop it in time. the camera in this film would not stay still and it gets really annoying after a while but the action is enjoyable to watch and the acting is fine.

Even before I watched it, I kinda expected to like Unstoppable just because I like trains but I didn't know I'd enjoy it as much as I did.Unstoppable had me hooked

"Unstoppable" is an action-drama centers on Frank (Denzel Washington) and Will (Chris Pine) as they attempt to first avoid a runaway train and second stop it. I expected much from this, and I wasn't disappointed after watching. It was really an unstoppable hold throughout. Good to see Denzel and Chris Pine doing this film. Very good! Well done. And I like the side stories of their wife issues. BUT actually, I thought it was going to be just train collision of that runaway and the one with the students. VERY GOOD ACTION! :D

A train keeps moving after a mistake of two conductors and keeps going faster. It is heading to a city and fall out a very curvy corner. But it comes worse: the train is loaded with toxic material, and other trains are coming right at it...

The movie is inspired by true story of a train who, on the 15th may 2001, drove 100km through Ohio without a conductor. But this movie is set up in Pennsylvania and the characters are invented.
This movie is different as other Tony Scott movies it is not a typical hollywood-movie, though some parts were very clichÃ©d and even physically impossible, it is based on a real happening and Tony Scott really filmed it, like it was real. Still it reminded me sometimes of "Taking of Pelham 123"
Washington and Pine are solid. The script is good. The …

I went into this moving thinking it would be a fun mindless action movie. I was right it was a mindless action movie but it lacked the fun. The only thing that made this move remotely watchable was Denzel Washington. As always Denzel played his part perfectly and raised the movie from bad to almost watchable. With barely any character development Denzel was able to make you care about his character a little bit and not want him to die in a fiery crash. That is more then I can say for the rest of the cardboard who when there life was in peril didn't really care that much if they made it to the end of the movie or not. I would not recommend this movie to be added to your Netflix cue because it would be a waste of a disc you could use on a movie that was much better. Maybe if you were …

When a runaway train escapes the rail yard, it's up to an experienced engineer (Denzel Washington) and a young conductor (Chris Pine) to put aside their differences and slow it down. The train is pulling tankers containing highly explosive material, and hurtling along at 70mph it has to be stopped before it hits civilization. Assisting them is a headstrong yardmaster (Rosario Dawson) who hopes to derail the locomotive in a sparsely populated area. We are told at the beginning that this is based on true events, which makes the film more chilling at the start. The action kicks in fairly quickly and the pace never sags. In the end though this was an exciting, involving piece, particularly as the train hurtled to that Deadman's curve and Dawson, Pine, and Washington all play their parts with …

No posts have been made on this movie yet. Be the first to start talking about Unstoppable!