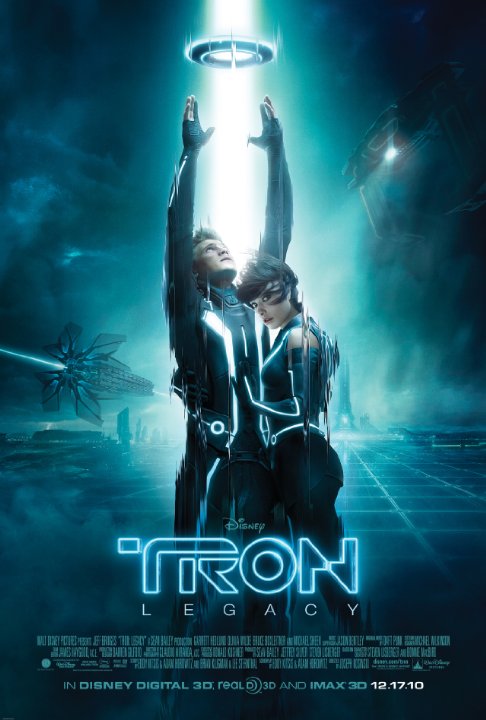 Plot: After his father, Kevin Flynn, goes missing, Sam Flynn follows clues and information leading to an old arcade his father used to run. But in order to find his father, Sam will be transported to a digital world where he will have to survives a series of deadly games and rely on new friends in order to find the truth. -- Chris Kavan

It's was a okay sci-fi movie.

Great use of CG effects, but I had a hard time trying to find something fun here. Granted, the first movie wasn't engaging, but it was a little fun. Here the effects felt like the focal point and everything else was there just for the sake of it.

Some people hold the original up like some sort of holy relic of awesomeness - I thought it was kind of campy myself. This sequel works much better - you still have Jeff Bridges (two actually) and Garrett Hedlund does a decent job as his son. Great special effects, a pretty good story and hints of another to come - all in all, a good movie.

I thought this was pretty good. 2010 was a good year for Disney...Toy Story 3, Wonderland, Secretariat, Tangled, Tron Legacy. They had a lot on their plate, and Tron Legacy did not disappoint.

I want to defend the film first. So what if this has a "video game storyline?" It's about a videogame and an electronic world; I'm really confused as to what else could been expected, the plotline was highly entertaining and I honestly can't ask for much more. The visual effects were STUNNING! Some of the best I have ever seen. I expected that the film would be visually astounding, but I was still blown away. I was truly fascinated by the way this film looked...so cool. I liked the actors, Jeff Bridges is great in anything, and Garrett Hedlund was even okay. Olivia Wilde was nice, too. I'm a …

After the events of the original Tron, Kevin Flynn disappears and his rebellious son enters the virtual world two decades later to find his father. The original Tron was a visually ground breaking film with an fun messianistic plot revolving around a population of personified "programs". Tron Legacy is more an update than a sequel and visually at least, they've taken the idea and ran with it to glorious effect. They've essentially Matrixified the digital world which gave the director room for some visually eye boggling set pieces including the familiar light cycles, disc duels and now light fighter jets. It takes a lot of cues from old school sci-fi, including 2001, Star Wars and even Flash Gordon and at one point even directly quotes kid's classic War Games. The plot is a little …

Kevin Flynn, software engineer and the CEO of ENCOM International disappears. Before his vanquishing, he promised his son Sam that he would take him to the Grid. An ENCOM executive Alan Bradley, Kevinâs friend, informs Sam that he received a page. Kevin â âYou're messing with my zen thing, man.â âThe thing about perfection is that it's unknowable. It's impossible, but it's also right in front of us, all the time.â âSome things are worth the risk.â âI screwed it up, chasing after perfection, chasing after what was right in front of me.â Symbolism's of appreciation, change, imperfections and tampering were exhibited. The special effects, pulsating and riveting soundtrack with the action sequences were fantastic. Tron: Legacy is a good sci-fi filled with various …

I loved this movie. I mean there's stuff that doesn't make sense if you stop to think about it. Let's be honest that could be said of many movies.In 3D and blu-ray this movie looks amazing.I totally agree with you Chris aka Tarkin, Flynn Abides

I didn't think this was too bad - especially compared to the original (which, let's face, has not aged that well). The characters were a bit empty, but Daft Punk's score was perfect for the style of film. Every time I see Jeff Bridges in anything now, I can't help but think of The Dude.

love jeff bridges but wow what a awful movie this was&amp;nbsp; truely boring not appealing in the slightest

I think this film is criminally underrated. I was blown away by the fact that the Academy didn't nominate the movie for visual effects or Daft Punk's score. Plot was thin, the dialogue was terrible, but I didn't care. I dug this movie for its incredible look and the music. And that light cycle sequence with the motorcycles is nothing short of spectacular.

Trailer looks better and better. I really hope they do the music right. With Disney behind it, I doubt it will be as dark as I want it to be.