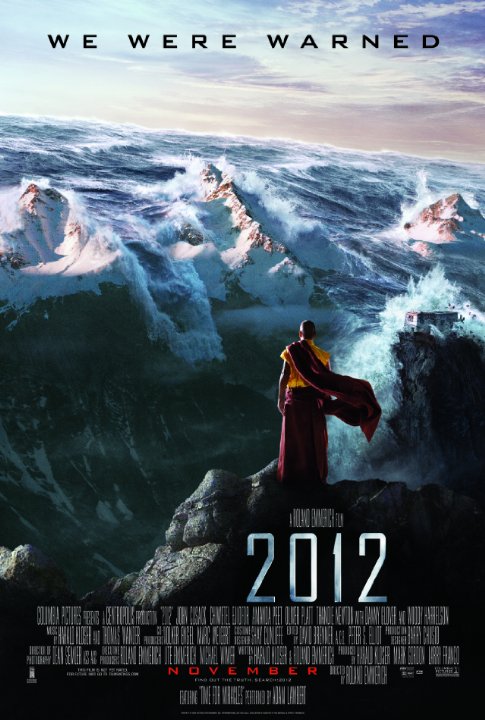 Plot: Scholars and everyday people have long wondered why the Mayan calendar suddenly ends on 12/21/12. Director Roland Emmerich imagines a world torn apart by global catastrophe - earthquakes, volcanic eruptions, tsunamis - and a group of people who dare to survive and try to stop the events before they wipe out all of humanity.

Scholars and everyday people have long wondered why the Mayan calendar suddenly ends on 12/21/12. This movie has amazing visual effect's but the movie lacks on story and acting.

The disaster movie to out 'disaster' them all. Huge catastrophes in an empty movie. It's an hour and a half too long and it becomes boring after the halfway mark.

Armageddon Without The Hook

â2012â is yet another entry into the âend of the worldâ genre of films. This movie sticks closely to the now familiar pattern established by predecessors such as âArmageddonâ, âDeep Impactâ, and âThe Day After Tomorrowâ. Director, Roland Emmerich, also served as producer on the latter film and other special effects laden projects such as âIndependence Dayâ and â10,000 B.C.â

The story centers on Jackson Curtis, played by John Cusack (âMartian Childâ, âIce Harvestâ, âMust Love Dogsâ), who is a frustrated author, divorcee, and considered a bit of an under-achiever by those around him. Jackson inadvertently stumbles upon a possible government cover-up of a pending disaster and immediately tries to spirit his kids, ex-wife, and her current husband to …

Scientists discover that the planet's crust is destabilising creating a race against time to save as much of humanity as possible. 2012 has all the ingredients of an Emmerich film; the estranged couple with plucky kids in tow, the noble self-sacrificing president, the conspiracy theorist kook and of course the gleeful trashing of the world's greatest monuments (this time the White House gets squished by an aircraft carrier and the Vatican falls over on the Pope!) It follows the usual formula of spectacular set pieces punctuated with schmaltz and every race against time comes down the the final second and every escape is by a hair's breadth. It actually works quite well for the centre section when they're outrunning earthquakes and volcanos with some truly jaw dropping chases involving …

Well research disaster film with some touching moments. Large cast consists of Adrian Helmsley (Chiwetel Ejiofor), White House Chief of Staff Carl Anheuser (Oliver Platt), President Thomas Wilson (Danny Glover), DJ Charlie Frost (Woody Harrelson), author/writer Jackson Curtis (John Cusack) and more. The stunning effects are pretty to look at but unfortunately so many scenes were unbelievable to the point of ridiculousness. One of many would be the limo (out running collapsing buildings and a cracking fault line), plane (out maneuvering the obstacles and running with a limited ground for take-off), and cellphone signals during tsunamis, long underwater scenes, again out running the hot rocks from the volcano, etc. Screen play was decent; acting was solid, overall a typical popcorn …

If the nature wreck of earthâs crust isnât enough to blow your mind, what about the biggest eruption of volcano at Yellowstone..?

Dude, I sent you a link to that story that denounces every myth out there from NASA.&amp;nbsp; All theories are impossible based on known science at this time.&amp;nbsp; There are about 10 planet X's right now, which is what NASA calls every object that it can not identify. Once it is identified, it is no longer called Planet X.

I want to become the leader of the IHC. If planet X hits the world in 2012 and there was a hollywood movie about it before it happened I am going to laugh my ass off.