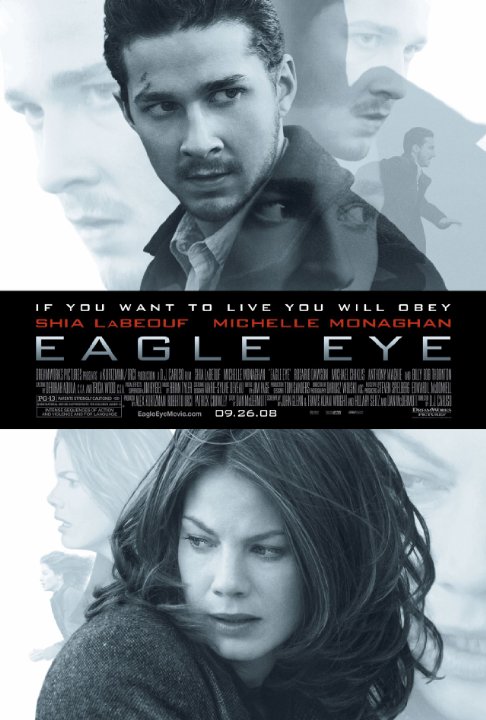 Plot: Two young people, one man and one women, are mysteriously brought together by a series of phone calls in which both of them experience near death experiences. The drama increases as the threats become more dangerous pitting themselves against not only the U.S government but also those who are using the technology to track them. Is there something bigger that is happening? The couple begins to take it upon themselves to discover the truth.

Wow, I can't believe David Fincher made this. To be fair, Fincher does look like the type of guy who would make a movie like this. Here's the context: www.youtube.com/watch?v=icnV96YlFvc

A pretty good movie.Not bad at all

About as average as thrillers get. The ending was a mess.

A slacker who works in a copy shop is flung into the middle of a terrorist conspiracy upon the death of his twin brother, a high flying military analyst. Eagle Eye is most definitely from The Michael Bay School Of Scriptwriting, in that it was written by a paranoid technophobe who seems to be convinced that anything and everything in the world can be controlled by a geek with a computer. "They" can give you an emo haircut or leave a floater in your toilet with one malicious keystroke. But at least Bay has SOME sense of irony and humour; this film manages to be so absurd and yet so totally po faced it's almost frightening. It goes through the motions of slick, fast paced visuals as cars pirouette through the air and explode into flames in a hail of bullets as our courageous cardboard cut …

"You have been activated"

Often times while watching movies the viewers will ask themselves 'could this really happen?' That question is raised in this thriller executive produced by Steven Speilberg, starring Shia LaBeouf and Michelle Monaghan. LaBeouf plays Jerry shaw, a copy boy who recieves threatening phone calls from an anonymous woman placing him in the center of a terrorist plot. After escaping FBI custody he crosses paths with Monaghan's Rachel Holloman, a single mom whos son is threated when she too recieves mysterious phone calls. The duo then find themselves on the run from the government and the unknown voice.

Greatly influence by films like 'Wars Games' and 'The Bourne Series', director DJ Caruso who also directed the suprise hit of 20007 'Disturbia' has created an intelligence nail-biter. La …

Computers are bad. Someday they'll all go bonkers and try to take over. We've all seen this before and this movie rehashes an old storyline with new technology and special effects. What any movie like this has to do is suspend disbelief and they lose that a number of times; in particular is a silly chase through the baggage handling system in an airport and the climactic scene during the President's State of the Union address. Logic and real world fundamentals are thrown out the window for the sake of their story telling. If you want a good thriller about computers taking over the world watch "Colossus: The Forbin Project".

I do not begrudge any of the performers in this movie who all put in top notch performances. Special nod to Michael Chiklis as the Secretary of Defense. Here's …

The best part of Eagle Eye is that Hal from 2001 evidently has a daughter... and she kidnaps Shia =)

You can read my review - Eagle Eye is a typical summer popcorn flick, I actually have nothing against any of the acting in the movie, it's the story and plot that's lacking here. I think if you give LaBeouf a meatier leading part (something dramatic rather than action) I think he would do a good job. I'm still waiting to be impressed, but I think with the right part he could pull it off.