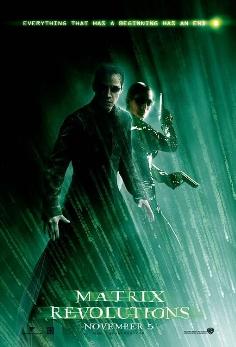 Plot: Neo is the key to saving both The Matrix and the real world as the mechanical army bears down on Zion and Agent Smith puts his final plans in motion.

Although more watchable than "Reloaded," "The Matrix Revolutions" is a bunch of fast-paced nothingness that never justifies the existence of itself or its predecessor.

Abysmal in every way imaginable. Enormous plot holes (hello, armored suits with zero protection to the operator), terrible dialogue and a nonsensical plot cripple this movie at every turn. The prime feeling this movie gives off is that the series should have never become a trilogy, it should have died off after the first Matrix. Watch the Animatrix instead. This movie is trash.

The story is about Neo is the key to saving both The Matrix and the real world as the mechanical army bears down on Zion and Agent Smith puts his final plans in motion. This movie was a big waste of time which is a same because this is the last one or is it ?.

One Deux Ex Machina after Another in this finale.

Eschewing the rich textured world building and philosophical underpinnings of its predecessors, the final installment of the Matrix trilogy bravely settles for mindless CGI action and drawn out battle scenes. Which to their credit, the effects have aged better than expected. Neo (Keanu Reeves) and his costars are almost an afterthought. The big robot vs mecha set-piece set against the grimy dank backdrop of Zion makes for a drab spectacle. Again, it's at least aged well. But that's not enough after all the last two movies spent so much time building up for. Hugo Weaving looks like he's having so much fun as the vile Agent Smith. Fans will be disappointed while casual viewers will surely be lost. As of this review in 2019, it's been announced that a fourth Matrix film is in development …

"The Matrix Revolutions" by Yojimbo

Agent Smith's reach has extended into the real world threatening Neo's attempt to end the war as the machine offensive breaches the gates of Zion. The disappointment felt upon the release of the rather self indulgent and empty Matrix Reloaded caused a real backlash against the Wachowskis, and Revolutions garnered a similarly lukewarm reception. But for me, shifting the action to the "real" world meant less reliance on endless stop motion fight sequences and freshened things up immensely. The visuals are truly spectacular, even by today's standards meaning Revolutions is easily the best looking of the three films and it has a more epic scope that reminded me of the last battle sequences of Return Of The Jedi done in the style of Aliens, and for a sci-fi nerd that's the ultimate …

Not a good ending to the trilogy

"The Matrix Revolutions" is not a vast improvement on the mediocre first installment in the series. The only thing that saves this one, like the first movie, is the spectacular special effects.

This time, the machines attack the human resistance in their on proverbial backyard -- and almost destroy mankind once and for all. However, the biggest problem for the machines and humans is "Smith" (Hugo Weaving), a program created by the machines that has grown stronger and more dangerous to mankind and machine.

The acting is better in this movie, but it is still not perfect. I just could not believe any performance.

Another problem with the characters is the development of the ones introduced in this movie. You don't learn anything, if at all, about these people.

The Matrix films (ranked) by Protozoid

i like the way the movie ended. there cannot any better ending.

We have all heard what others think the ending meant, but what did it truly mean?&amp;nbsp; How did he kill smith and why didn't he just beat him another way so he could live?&amp;nbsp; These questions bother me so much!