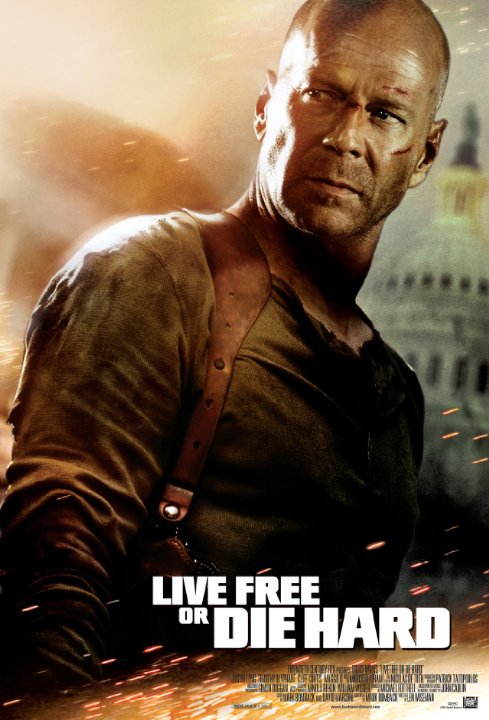 Plot: John McClane (Willis) takes on internet terrorists that threaten to take down the US Government.

I would love to live not to die hard.live free or die hard. this movie is not a die hard movie but it is a lot of fun I mean the action is enjoyable and the great stunts.and this movie will get a 3/4 star's "a must see blockbuster".

People can feel free to s**t on this movie all they want. I, on the other hand, will enjoy a fun and wild installment of the Die Hard series.

Although Live Free and Die Hard presents some unique additions to the franchise (particularly the bad-ass Mary Elizabeth Winstead as McClane's daughter,) it lacks the freshness of the first film and the brutality that characterizes John McClane's brand of action. It's still a fun thrill ride with some clever callbacks to the series, but it feels somewhat like a watered down, sleeker and slicker version of the gritty franchise.

Live Free or Die Hard is actually a strange experience; for a film that strays so far from its franchise's staples and roots, this film is pure, action-packed entertainment nonetheless. While I understand why many fans of the franchise might dislike this entry when compared to the others, I still think those people are making a huge mistake. Live Free is a good action/thriller. It hardly feels like a Die Hard film, which is disappointing, but it's very well directed, well acted, and the script is solid. I enjoyed it a lot. I loved the effects; some were over-the-top for a Die Hard movie, but the sequences were extremely well shot and surprisingly original. Sure, this probably isn't the perfect Die Hard sequel, but it's still a good movie worth seeing!

Grade: B-
Live free or Die Hard is no free action film, it is heavily loaded with action set pieces with a breath taking screenplay. Intention behind the writer and director is clear. He wants to bring destruction of USA and using sophisticated computer techniques, hacking of public telephones, electricity, traffic signals, etc are on.. USA is going to face doomsday. The whole scenario sets place in Washington DC. There might be questions like How this can be done? It all happens in Die Hard 4.0. Just sit back and see doomsday using computer technocrats, handled by a cyber terrorist. Thatâs what I would say.

So whatâs the plot? McClane (Willis) is behind his daughter who does not care about him. She wants to.be aloof. McClane rescues a computer operative Farell (Justin Long) from …

Bruce Willis returns as the one man counter-terrorist unit, this time taking on an ex-government agent bent on sinking the US infrastructure into chaos while making a few billion on the side. The basis of the plot is the classic "computer geek+laptop=total control over everything/anything in the world" school so favoured by Michael Bay and the like resulting in America's favourite terrorism inspired paranoid fantasy, but having said that, it's no more ridiculous than the Bourne films and delivers the same kind of frenetic stunt-orientated action. Willis proves he can still cut it in the ass kicking stakes at his ripe old age and some of the set pieces are truly spectacular. Justin Long manages to play the wise cracking nerd without grating on the nerves and it cracks along at an electric …

No posts have been made on this movie yet. Be the first to start talking about Live Free or Die Hard!