Indiana Jones and the Kingdom of the Crystal Skull Movie Information 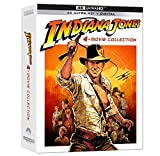 Plot: Dr. Jones is back again (for the last time?) and is put in place over 10 years since his last filmed adventure. This time it is during the cold war. The Nazis are gone, the WW II is over and now he is left with a sidekick and a couple of women to discover the myth and the truth about a mysterious Crystal Skull which may give great power to those who control it. Will Indy be able to handle the rigorous adventure so many years later?

Unwanted, unnecessary, and unimpressive. Its 2nd rate special effects and preposterous ending make this the franchise's worst installment. The Ark of the Covenant's cameo is the film's only memorable moment.

Dr. Jones is back again (for the last time?) and is put in place over 10 years since his last filmed adventure. This time it is during the cold war. The Nazis are gone, the WW II is over and now he is left with a sidekick and a couple of women to discover the myth and the truth about a mysterious Crystal Skull which may give great power to those who control it. Will Indy be able to handle the rigorous adventure so many years later?. Horrible CGI and the nuke the fridge, this movie was a big joke when it came out and am still joking around.

Indian Jones is old. His son is uninteresting. Russian woman is not good. Look of film is better than nowdays average film, but its far from old Indiana Jones, especially first part. Story is pretty bad, but interesting with many interesting places. Anyway its okay film, because of idea of Indiana Jones(which is great idea and should be executed better), pretty good directing(not nearly as good as old), interesting locations, but not really good one.

It'sstill the mileage that counts, right?

As the number one fan of the Indiana Jones franchise on the planet (or as my ego tells me so) I loved this movie when it first came out. I saw it in theaters, bought the dvd, watched the dvd, and I still watch it on TV if it was on.
I'll admit now that it's got some major problems. I hate how reality catches up all the time with you.
As someone who obsesses over all things related to Indiana Jones and related merchandise, I'll give some backstory. First off, neither Ford nor Spielberg wanted to do a fourth film. Granted Ford would do it if Spielberg was up to it but Spielberg was not up to it. None of the potential scripts were good enough for him except for one written by Frank Darabont (the guy who made those Stephen King movies?) in the 1990s. But of course, that one was rejected …

"If you want to be a good archaeologist, you've got to get out of the library."

I had a fun time watching this movie. Sure it's not perfect, but you know what, I don't care. Whatâs an "Indiana Jones" movie without a bit of far-farfetchedness? Our whip-wielding, snake-loathing screen hero in spite of his aging is in fine form. He is approached by a young biker rebel named Mutt Williams (Shia LaBeouf). Mutt has been ordered by his mother and an old college eccentric to ask for Indy's help in tracking down the tomb of a long lost conquistador who went missing searching for the fabled city of El Dorado.

Many ingredients seem familiar: jungles, deserts, nasty insects, ancient tombs, hair-raising chases, gallons of water, the greedy villain being killed by supernatural powers as we are …

"The Kingdom Of The Crystal Skull" by Yojimbo

The Crystal Skull was always going to have an uphill battle. Like The Terminator, Alien and Star Wars franchises Indiana Jones has become iconic and almost a sacred cow to those of a certain generation. But the fact is, viewed in their own right, Terminator 3 and Alien 3 were very well made and entertaining films; they just never stood a chance because of the inevitable comparisons with their predecessors. The same is true of this film. The fact is it retains the feel of the series reasonably well and still featuring Harrison Ford and the consummate skill of Spielberg as it does, it was never going to be bad. The script is the obvious weak point, it really just being a pastiche of the previous three films with some sub-Stargate style nonsense about aliens tacked on, but LeBeouf makes an …

Yeah.&amp;nbsp; That is what I thought too.&amp;nbsp; I know it is extremely over the top compared to the others but Raiders is actually the most realistic (though that is not saying much).&amp;nbsp; Still, I love Raiders and consider it the best one though I do truly enjoy Temple due to child hood memories.

I find it pretty humorous that some criticism is of the aliens. Â Every Indiana Jones movie has involved the paranormal. Â Apparently lost souls flying around in Raiders is okay, magic rocks and pulling out beating hearts is okay in Temple of Doom, and a 700 year old knight in Last Crusade is just fine,but apparently aliens aren't plausible and completely ruined the movie.

Why did Steven Spielberg and George Lucas have to rape Indiana Jones?&amp;nbsp; I'm so sad. :-(

I see this movie is coming out on DVD in a couple of weeks.&amp;nbsp; Dose anyone know if they are putting together a boxed set with all four.&amp;nbsp; Bascially, a set like the last ones but with all of them in it looking the same and being part of the same set?&amp;nbsp; I am holding out until then