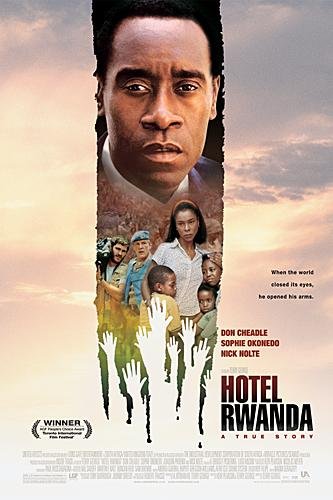 Plot: A hotel manager tries to save the lives tutsi refugees while the Hutu militia take over Rwanda.

The genocides in Rwanda are an often neglected topic of political discussion. This movie depicts what ordinary people will do to protect others.

A realistic depiction of not only the conflict in Rwanda, but the reality of apathy in global politics. Don Cheadle does magnificent job in being not only a family man, but one who answers the call to save others when they looked to him for help. A story that doesn't quite have a feel good ending, but in the end does make you consider the reality of countries that continue to have ethnic struggles to this day.

Don Cheadle gives a human and believable performance as Paul Rutabaga and the film captures an inspiring true story with a documentarian approach. With such inspiring material, it's hard for the film not be moving, but the inherent worth of the story is backed up by stellar acting and some inspired photography.

Like The Killing Fields, Salvador and Schindler's List before it, Hotel Rwanda catalogues yet another example of the human race's remarkable talent for inhumanity. Don Cheadle gives a career best performance as a hotel manager who uses all his intelligence and guile to help save over 1200 refugees from the genocidal rampage of Hutu militants. The rest of the cast also put in the kind of committed performances actors give when they truly believe that a story must be told and although it is a little manipulative, it's never heavy handed or clumsy. I must admit, I didn't realise that the cultural segregation of the Tutsis and the Hutus was just an arbitrary division created by long gone occupying colonialism and the film gives a welcome lesson in the cause and nature of the conflict. It …

A President was killed in Rwanda and a war between the Tutsi and Hutuâs erupts. He negotiates with Capt. to keep the Tutsi captives alive for 100,000 francs. Mr. Daglish (Phoenix) takes footage of the massacre while 10 UN Belgian soldiers were killed. Paul takes in refugees in the Mille Collines Hotel. All foreign nationals have orders to leave the country. Sabena Airlines President Mr. Tillens (Jean Reno) helps the situation in Rwanda. Canadian Colonel Oliver (Nick Nolte) helps Paul Rusesabaginaâs (Don Cheadle) family escape the violence. Some memorable lines: Paul â âFamily is all that matters.â General â âMay we all find peace.â A survivor says âThank you for saving our lives.â Dube - âWhy are people so cruel?â

Sensational screenplay and a …

Everyone should see this & remember what happened

In 1994 Rwanda faced a genocide of massive proportions due to an instable political environment. It is estimated that nearly one million people were slaughtered. This film places you right in the middle of it, as Don Cheadle plays Paul, a hotel owner who finds himself sheltering those who are targeted for death. The film depicts how large the conflict was and how the international community turned its back on Rwanda and left its citizens to die. Extremely powerful and uplifting, Paul shelters over 1000 refugees in his hotel and desperately tries to keep them alive.

Honestly, this is a movie that should be shown in history classes in high schools. It's not a happy or uplifting film, but in the tradition of Schindler's List is makes you wake up and realize the atrocities that …

No posts have been made on this movie yet. Be the first to start talking about Hotel Rwanda!