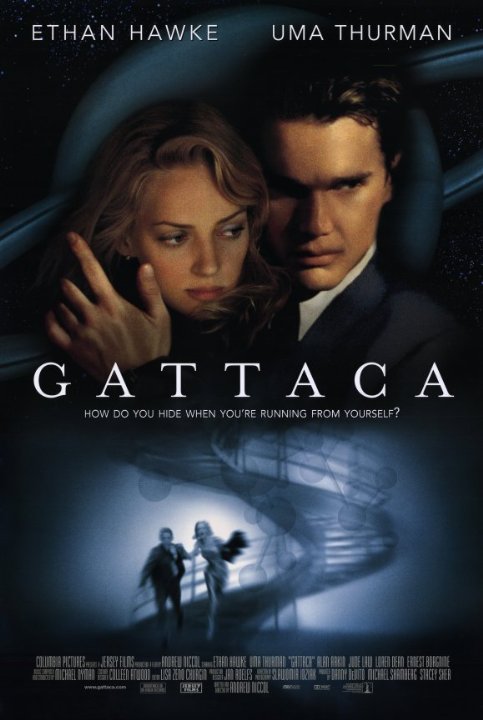 Plot: In the not so distant future genetics is everything. The world is separated into the genetic elites and the degenerates. A degenerate leaves his old life behind to achieve what he has dreamed of no matter what the cost.

"Gattaca" is a wildly original film that combines elements of a murder mystery, a cat and mouse thriller, and a thoughtful sci-fi drama with a message challenging society. It's also elaborately and spectacularly designed.

God's sons as the normal under-classed, and humans genetically constructed classificated as elite. But Vicent, and Invalid normal man have an desire stronger that his human genetically inferior condition. Plausible screenplay with good performances by stellar cast and enjoyable music by Michael Nyman.

"I got the better end of the deal. I only lent you my body -- you lent me your dream."

In a not so distant future, human beings can be genetically constructed before birth with Biology giving parents the opportunity to influence the genetic code of their unborn children. People with the best predispositions of their parents are so called "Valids" while the natural born people are "In-Valids".

The movie starts out with Vincent being a god-child, de-gene-rate, or in-valid. The way the writer uses the term in-valid is very clever because the word can also be pronounced in-va-lid (which is an infirm or sickly person). By being genetically inferior, Vincent is discriminated against in the world that he lives in which prevents him from doing anything that most people would see as …

In a future society where a person's worth is judged by their designer genes, a would-be astronaut forms an illegal partnership with a crippled Olympic athlete to cheat the system but they are threatened with exposure when the mission director is murdered. Gattaca is one of those thoughtful, concept sci-fis that trades special effects and action sequences for ideas and a commentary on the human condition. Gattaca is set in a world where our status is defined by the quality of our genes and explores the idea postulating that a person's dreams and ambitions can make us more than the physical shells we inhabit. Its elegant visuals reflect the society of perfection it represents and the fine performances by Hawke and Jude Law make for a moving and engaging story of a symbiotic relationship …

Yes it does.&amp;nbsp; It has some psycho issues thrown in there.&amp;nbsp;

I mean it appeals to non sci-fi fans. :P

This is the best movie ever made. The story is solid, acting and cast is great and it has something that most sci-fi films do not: it appeals to non sci-fi films. Gattaca (1997)One of the best movies ever made4/4 starsAchieving is believing is the message of this film. When everything is looking hopeless for Vincent Freeman (Ethan Hawke) he still has his dream. He is a degenerate, a &quot;faith birth&quot;, he has a bad heart and bad vision. And in this futuristic world where your genes determine &hellip;