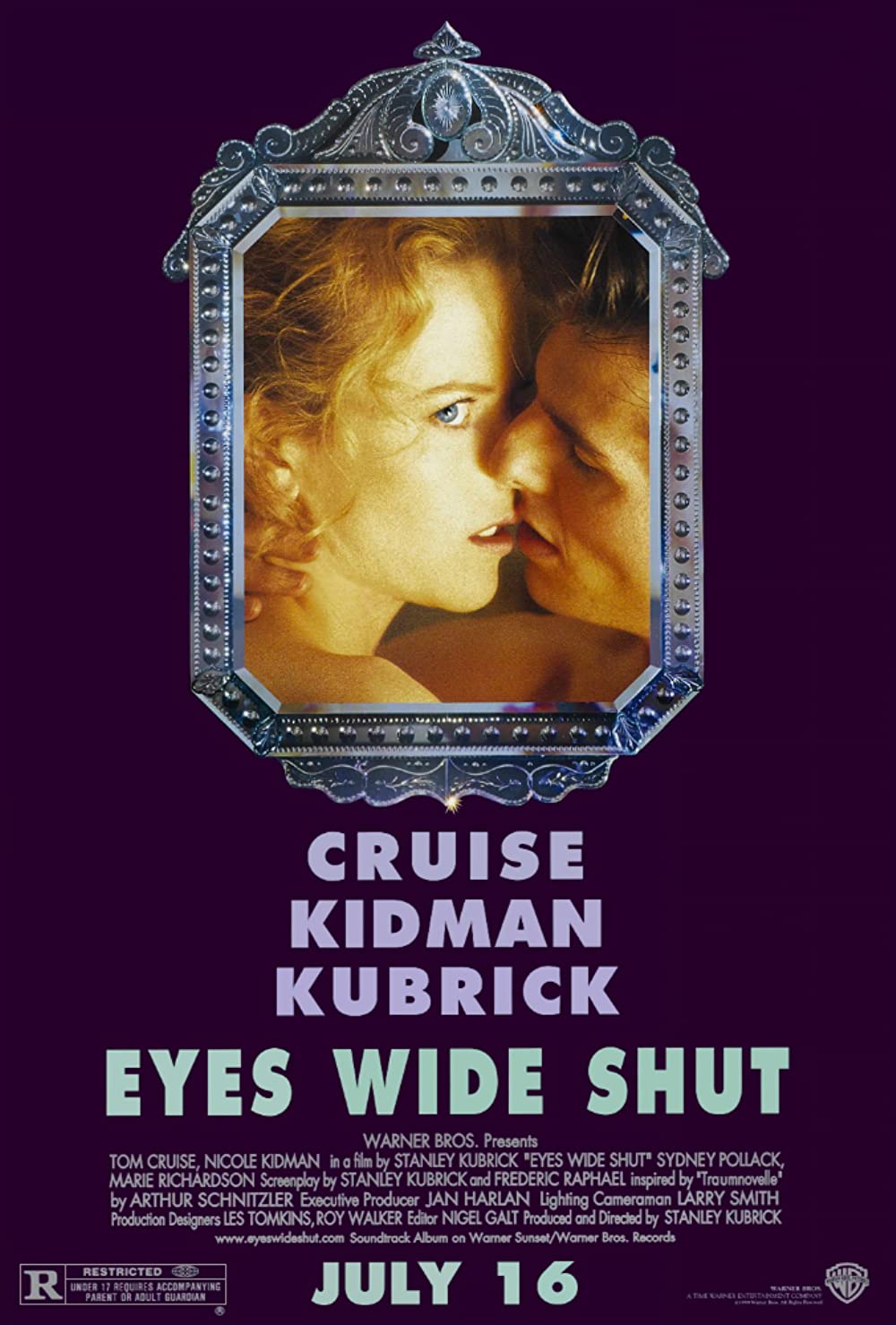 Plot: A New York doctor takes a trip to a seedy, decadent and dark part of life after his wife admits she almost cheated on him.

Stanley Kubrick's final film gives just about everything you could want from it: intensity, suspense, drama; all providing the cinema great to go out on a high note.

Story is interesting. Mystery is effective with some great scenes. Intense. With great music. And of course great directing. Even with all this, this movie is just good to me, not nearly as good as 2001, The Shining that also included mystery and were much better.

Dr. Bill Harford (Tom Cruise) and his wife, Alice (Nicole Kidman), a couple from New York attend a Christmas party by a wealthy patient, Victor Ziegler (Sydney Pollack). Things go weird after smoking marijuana. A simple premise and yet the unorthodox and snail paced direction was utilized. The settings and masks added to the already dull scenes. Eyes Wide Shut is in this reviewer's opinion one of the director's weakest film.

Do there love each other or do there not?

This was Stanley Kubrick last film and boy didn't he end with a bang.

The story is about a New York doctor takes a trip to a seedy, decadent and dark part of life after his wife admits she almost cheated on him.

When this movie first came out most of the viewing auditions thought to themselves "What the hell was all that about?". Even I thought that at the first, until I sawed it again for the second time and got a lot out of it not like the first time viewing it.

The cinematography in this movie was so haunting and so clean till the point where I couldn't get my eyes of the screen. The acting from Tome Cruise and Nicole Kidman wasn't just great but freaking fascistic. The writing in this film was some of the best writing I've seen in years.The directing in this movie from …

I guess you could say that audiences have their eyes wide shut (*BADUM TSS*) to the brilliance of one of this director's best works.

Stanley Kubrick was an odd man, everyone could testify to that. He made unorthodox directing decisions, created very polarizing atmospheres and amazed filmgoers and critics throughout the ages. But, when his last film to date was released after his death, the reaction was very two-sided.
This film is regarded as one of those 'love it or hate it' type of movies. There's no in-between, you understand it or you don't. Although not his best, I think it is one of Kubrick's best and indisputably his most overlooked work.

An upper middle class professional couple in New York argue leading to the husband seeking a night of revenge driven sexual encounters at the thought of his wife's sexual fantasies with another man. Stanley Kubrick's last film, Eyes Wide Shut is a film I desperately wanted to like but like the A.I. project, which I still refuse to believe he instigated in its present form, it seems bafflingly bland and pointless. For a start, did Kubrick sit through Far And Away and think to himself "Eureka! That's the onscreen chemistry I was looking for!"?! Aside from some mindly intriguing gender political mind games, all you have here is Cruise wandering around New York encountering one deeply unlikely situation after another culminating in a ridiculously affected pseudo orgy and a total non-mystery. …

Best of the 90s by Protozoid

No posts have been made on this movie yet. Be the first to start talking about Eyes Wide Shut!