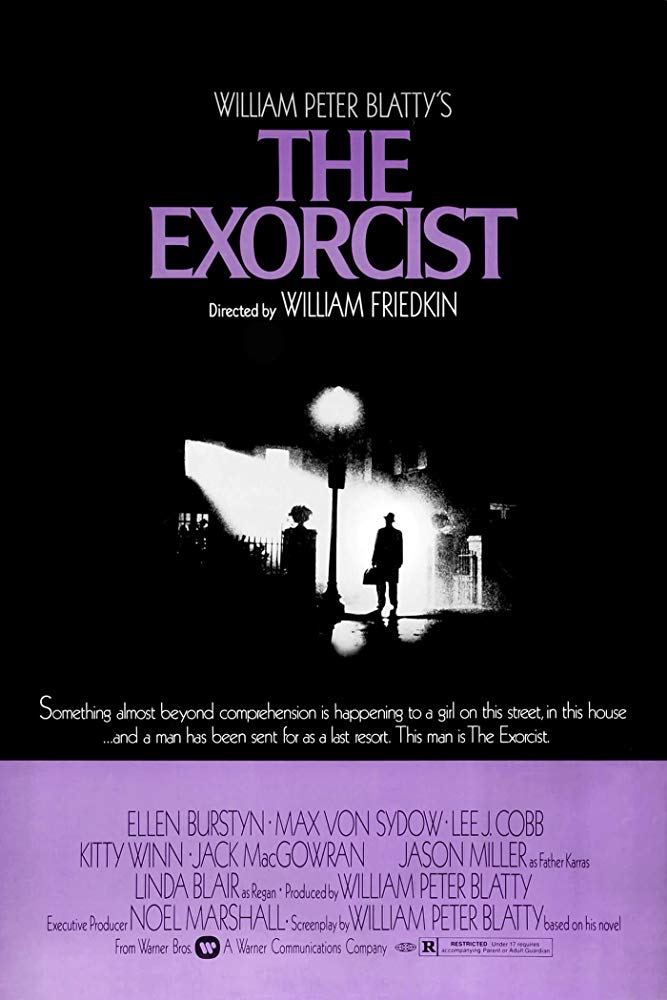 Plot: A little girl is possessed by a demon. Can the Catholic church save her?

Unforgettably horrifying, "The Exorcist" is still just as terrifyingly scary and terrifyingly well-acted today as it was in the early 70s. It was a movie that forever changed horror films in Hollywood.

The film is about a little girl is possessed by a demon. Can the Catholic church save her. This movie is pure creepy and pure gross. That image of the demon that you see not a lot, that face is just so freaky and it makes me jump every time I see it. The movie left a scary and a chilling in me after I finished watching it. The movie has its problems like the film at times does slow down a little bit. But overall The Exorcist is a horror movie that sticks with you after it's over. Leaving a uneasy feeling on you that a lot of people had back in 70's.

I watched for the first time when I was about fourteen, and I was not expecting much. In my mind I thought "How could this movie still possibly be scary? It was made in 1973." God was I wrong. I think I actually screamed when Reagan came down the stairs on her hands and feet. Just a classic, forever horrifying film.

We used to have a video man come around to our house every couple of weeks, and he would rent us videos and DVDs from the back of his van. Usually my sister would choose the movies. I didnât mind - she always picked good ones.
On the nights she wasnât at home, though, I got to pick, and, being a bit of a horror-hound, I would usually pick at least one. The video man got to know this, and, on the nights when it was my turn to pick, he would recommend me darker, more oogily-boogily films.
One night, he noticed I had come out to see him. He pulled up, got out of his van and opened the back up. Instead of letting me peruse, as he usually did, he leaned in and grabbed a DVD. âHave I got something for you!â, he said. He held out the DVD so I could seeâ¦ It was The Exorcist.
Now, …

The Exorcist is definitely a classic for a reason.

When looking for the best horror from America, most people would mention The Exorcist as a must see film. There is plenty of reason for this. Exorcist does it right in every sense of the word. The cast is exceptional crowned by a phenomenal performance by Ellen Burstyn. The music, set design and effects are all amazing and stand up even by today's standards. This movie definitely exploits a subject that arouses deepest passion; the existence of good versus evil within a religious framework. The only flaw I can think of is that it spawned the terrible sequel Exorcist II: The Heretic which was equally as bad as this was good. So, if you are a horror fan and haven't seen this film it truly is a must. The pacing is fantastic as well and after a short buildup the movie descends into …

never played with a ouiji board because of this

watched this for the first time this weekend, preparing myself to be thoroughly petrified, I braced myself for some scary stuff... that never really happened.
No I don't watch horror movies so I'm pretty much a wuss, but still, not freaked out by this one. I'm sure this was pretty disturbing in 1973, but it just isn't in 2013
The movie had entirely too much exposition. It could have easily been a half hour shorter. The beginning of the movie shows Max Von Sydow at an archaeological dig in Iraq. Why is this scene in the movie??? Other characters say he'd been there, we don't need to see it.
I'm sure there's stuff in the book that makes some of the weird scenes make more sense, but as a movie there was just to much that just never got resolved.
And if one is a fan of Max Von Sydow, …

The exorcism at the end of the film is still one of the greatest movie scenes of all time. &amp;nbsp;The Exorcist is just an enduring piece of cinema and easily one of the top horror films. &amp;nbsp;It stands up over time, because it is well made and provocatively entertaining.

This is still, hands down, my favorite horror film.

Terrifying and provocative. One of the best no holds barred horror films ever made. &amp;nbsp;Pushed the envelope wide open for the time it was released.Exorcist, The

Props for posting Phantasm above (&quot;He was low, brown, and down to the ground!&quot;). Exorcist to me was scary. I also think Exorcist 3 with George C. Scott was a great entry. There is virtually no gore, but Captain Howdy's sppeches freaked me straight the hell out! Nobody ever talks about that one so I'll show it love. Love should also be given to Let the Right One In, it's brillaint.
Let the Right One In ( LÃ¥t den rÃ¤tte komma in ) (2008)90%4/4 starsAction: 3/3 + Comedy: 1/2 + Good vs Evil: 1/1 &hellip;

Yeah, I agree.&amp;nbsp; Is it scary or gory...that is the question.&amp;nbsp; I prefer scary over dumb gore.