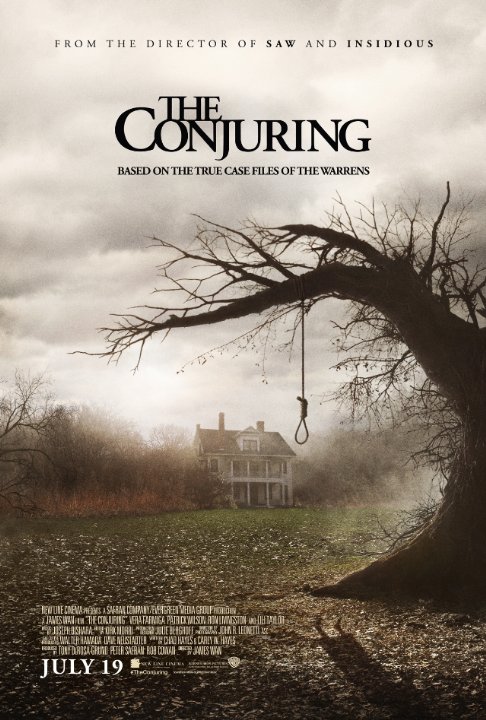 Plot: Based on an actual paranormal investigations - a family experiences unexplained events after moving to secluded farmhouse in New England. -- Chris Kavan

In an age where cookie-cutter horror films run amok, "The Conjuring" defiantly brings something new to the table.

James Wan remembers to make a movie and not just a collection of jump scares. Good acting, great atmosphere, and a genuinely creepy vibe makes The Conjuring the best horror movie since the Sixth Sense.

Don't forget to clap your hands lol. This movie is more scary then sinister and Insidious, I mean horror movie's are starting to get better now and new stuff to make you scared.

"Sometimes it's better to keep the genie in the bottle."

After reading a lot about it and hearing the rave reviews, I finally sat in my cosy sofa to watch this, according to sources, extreme creepy horror and enjoy every second of it. I was very curious if this film would tickle my nerves and let a scary and eerie feeling descend all over me.
Ultimately it wasn't so ...
Throw "The Exorcist", "The Changeling", "The Amityville Horror", "Poltergeist" and "Paranormal Activity" together, shake it well and finish it with masterly camera work, and you get this horror gem as a result. Only "Drag me to hell" also got my appreciation and I judged this one as being a decent horror film since they don't make them so well anymore recent years. Nowadays it's more teen-horror like Twilight and …

Time to scream ! James Wan is back with another scare stuff. The Conjuring is another film with a simplistic take on the Hollywood horror dramas. But the helm of the film is taken by James Wan (the man who gave us Saw series and the Insidious, which gained quite good ratings). So is the new offering special from James Wan? Does it get to the basics right? Will it be loved by the audience? Let me give a deep smile for the questions. James Wan has proved he is best at it.

The Conjuring is a creepy film. Never get serious for the first hour of occasional thrills and spills, because there is loads of creep stuff given by Wan towards the next half. It is crafted with great energy and the ghostly, and horror stuff does a nice job. This film gives what generally a horror film fan wants. …

A milestone of modern suspense horror.

James Wan. Wow. Thank you.
Thank you for moving away from the commercial horror and making the most original horror film of the year.
Focusing heavily on atmosphere and tension, Wan seemed to captivate me with every shot in this film.

The Conjuring is an excellently made film. Not just an excellently directed or written film, but it as a whole it makes me overjoyed this project was green-lit.
I think the main element that was the definite standout in the film was of course the suspense. It is perfect. Very rarely are there jump scares, and when they are, they have been set up very well for the viewer to actually jump in their seat.
This movie just did correctly what others couldn't do. Like in The Sixth Sense, we saw Cole go around hallways and witness dead people. I'm not saying …

Thank you guys for your thoughs about this movie, as I was wondering wether to watch it or not. Now I know that I want to watch it.

I appreciated The Conjuring because it has something so many other horror films fail to get right: atmosphere. Pervasive dread is hard to get right - but this film nailed it on the head. Other than a somewhat over-the-top ending, I though it handled things very well.Apparently James Wan wanted to go out with a bang as he claims he is &quot;done with horror&quot; despite the fact he seems pretty good at the genre.

over rated this one. its the same story as every other horror. first half was boring then it got good but then it just ended. worth watching but i thought the evil dead remake 2013 was the best horror in years

Same here. &amp;nbsp;The director seems to be leaving hints of sequels in the conclusion of his films. &amp;nbsp;Still, it was well crafted and scary.

I have to agree that this ranks as one of the best horror films in a long time. It's all about the atmosphere - something so many other films just can't get right but The Conjuring is pretty much perfect. The ending pushed things a little, but overall and excellent film.