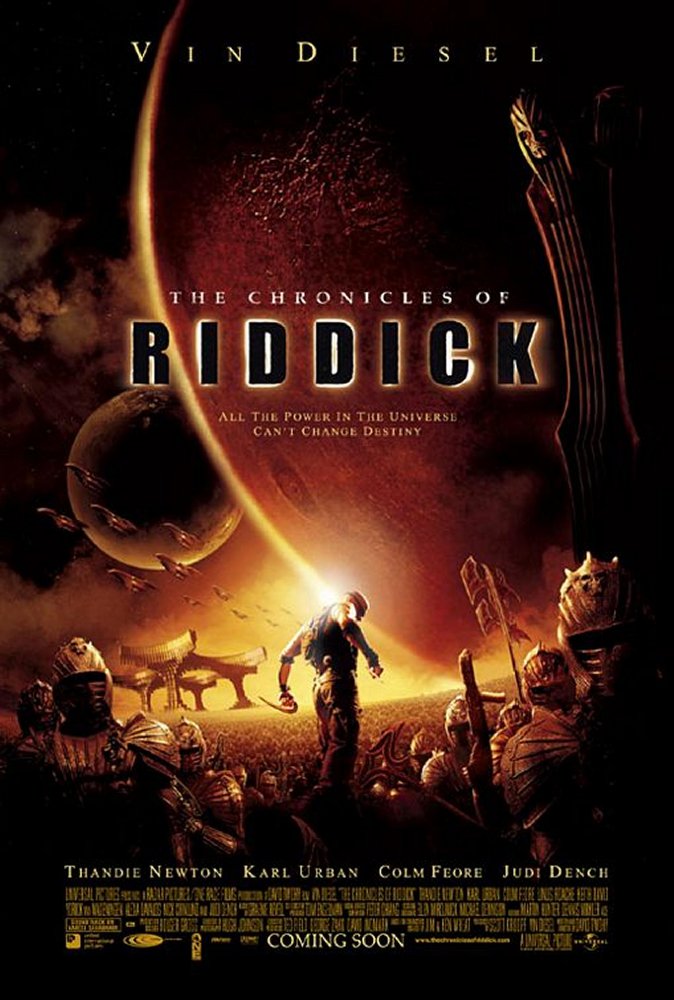 Plot: Betrayed and left for dead on a sun-scorched planet, Riddick fights for survival against vicious predators - and in the process becomes more powerful than before. The only way off is to activate a beacon - a beacon that brings bounty hunters and mercenaries directly to him - including one that is very personal. If he hopes to escape, he will have to fight his way out. -- Chris Kavan

I believe if Vin Diesel had everything he needed, Riddick would have been awesome. As it is, he may have the rights, but was hamstrung by a low budget - as it stands, the CG is adequate at best (though the beasties are quite inventive) and the mercenaries - even with Katee Sackoff, Dave Bautista and Jordi Molla giving it their all - are pedestrian at best. Diesel remains the best part of this franchise - calm, cool and utterly invincible. Hopefully there will be a next time.

A disappointingly pedestrian Riddick outing after the underrated second Riddick movie. Here, the budget has been stripped way down, which limits the scope of the action sequences and the special effects considerably. In addition, the plot is about as predicable and clichÃ© as you can possibly get. On the plus side, the first half hour or so is lot of fun with Riddick trying to survive on a planet filled with nasty CGI monsters, but the movie really bogs down once a ship arrives on the planet filled with a group of very dull mercenaries. From this point on the movie is unfortunately average at best.

Have to agree with a fellow critic. It starts off strong with Riddick's method of survival. It goes downhill with some ridiculous characters and dreary screenplay. The plot was not that interesting since it just rehashed the same story of the previous installments, he has a bounty and just wants to go home. Even the conclusion was a bore. If only they could come up with a better story and a worthy opponent instead of everybody fearing him. Overall, probably the worst of the trilogy.

Less flashy than The Chronicles of Riddick, this third installment about the spacefaring antihero returns to his roots. No longer at the center of an interstellar conflict, Riddick (Diesel) is stranded again on a desolate planet and fighting hostile alien creatures. Complicating matters is the arrival of rival mercenaries hoping to collect the bounty on Riddickâs head.
Vin Diesel is as stoic and menacing as ever. The first act was the best section, where he adapts to his new environment and even befriends a hyena-wolf as a pet. It shows his resourcefulness and his more friendly side.
The other characters are mainly there as cannon fodder or to v
be assholes to Riddick. Future MCU actor Dave Bautista displays hints of the star power weâre familiar with, but like the other …

Left for dead on a hostile planet, Riddick communes with nature to regain his edge and forges an uneasy alliance with a group of mercenaries to escape from a swarm of vicious indigenous creatures. David Twohy's sci-fi B-movie franchise abandons its pretensions to becoming a grand space opera and returns to its roots as a straightforward alien monster movie. It pretty much ignores everything that happened in Chronicles Of Riddick, preferring to become a cover version of its first incarnation Pitch Black. Once again a gang of disparate characters are holed up in a hostile environment and menaced by a horde of alien creatures, but this time the characters are a bunch of unlikeable thugs instead of people you really want to root for, and the fact that the creatures are in plain view at all …

Riddick is crowned king of his enemies, the all- conquering cult the Necromongers but gets betrayed by his jealous rival Vaako (Karl Urban returning for a one-scene cameo) while searching for his original home planet of Furya.

Kicked off a cliff in a desolate alien-infested planet, he is forced to seek shelter from the harsh rocky landscape and the vicious alien creatures that inhabit it. Needing a ride out of there, he sends a distress beacon which calls down two separate teams of Mercenaries, one a decent professional outfit run by Johns (Matt Nable) and his tough right hand woman Dahl (Katee Sackhoff).

The other is a bunch of crude bad space pirates led by the vicious and unpleasant Santana (Jordi Molla). Both groups are looking for Vin, but for different reasons; Santana …

No posts have been made on this movie yet. Be the first to start talking about Riddick!