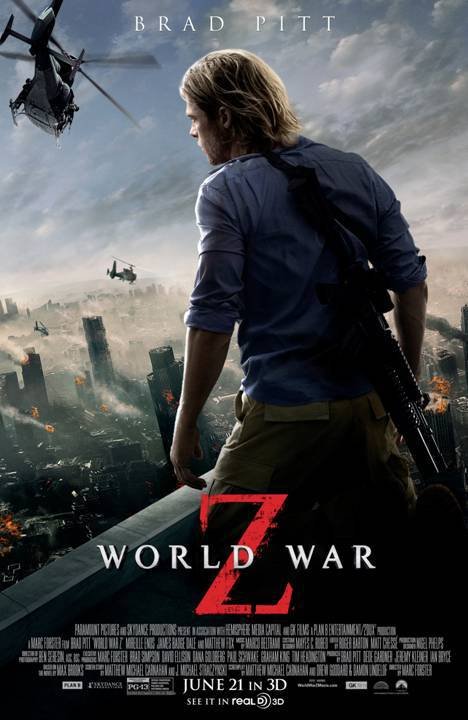 Plot: Based on the book World War Z: An Oral History of the Zombie War by Max Brooks - ten years after a zombie epidemic nearly exterminates the human race, the author takes a tour of the world interviewing survivors and tracing the history of the outbreak and how humanity fought back. -- Chris Kavan

One of the better zombie movies out there. Not quite as good as Night of the Living Dead (1968) or 28 Days Later (2002). My only problem is we never find out why their are zombies.

This movie was like 28 weeks later but the zombies in this movie have super powers. Okay I was the first one to be looking forward to this movie and it did not let me down. I mean the visual effect's look better in the movie and brad Pitt is still a good actor.

This was honestly the best zombie movie I've ever seen. The ending is very unique from other movies and it actually makes sense. The action literally starts four minutes in to the movie. The director waste no time going in to the action right away. I've never read the book so I can't relate it to that however. I at first though couldn't tell from the trailer that it was a zombie movie so I was quite surprised.

An outbreak of a virus that transforms human beings into vicious killers sweeps across the globe while a disaster zone investigator tries to trace its source in the hope of creating a vaccine. The first question is an obvious one, and no, disappointingly they're not "proper zombies". But of all the "fast zombie" genre, World War Z actually works by far the best. Seeing a tidal wave of rabid humanity with no sense of self-preservation hurl itself at crumbling civilisation makes for some extremely tense, visceral and exciting set pieces and the realisation of a world in dramatic crisis is extremely well done. Plot-wise things are not so strong; the story is little more than a series of breadcrumbs leading across the world as Brad Pitt follows clues to a somewhat unsatisfying conclusion, …

"I am Legend" on a higher level.

"Most people don't believe something can happen until it already has. That's not stupidity or weakness, that's just human nature."

The movie looks like "I am Legend", but on a higher level. I thought it was an exciting and wonderful action disaster movie to sit back and watch it from your couch, with a bowl of salted peanuts, on a Friday night. The zombie concept plays a major role but ultimately it's not a real zombie movie. Where a zombie movie emphasis on bringing the pictures as gross as possible (dismembering human individuals f.e.), WWZ emphasis on the visualization of the mass hysteria that was caused by a rapidly spreading deadly virus. In my view, these shots were magnificent visualized at certain times. The mass moving like running water and how a group of brainless zombies …

Zombies: World War Z is a gory thriller. At one point of time, when things get unleashed, I was wondering, how is this going to end. Luckily I am relieved and in fact I give a strong statement that Pitt pulled it off with his guts and charm. Gory scares: Director Marc Foster (after a poor take on James Bond) has brought back the zing to the hardly unbelievable film that gets brownie points for its novel take on the zombie genre. It did not knock me off, but Foster adds a certain element of hope to put this a perfect film. The undead are really gory, and another great thing I liked about is the speed with which they run and attack. Whole some summer fun! Who takes the role? It is Brad Pitt. I am certainly confused of Pitt taking such films with lot of CGI, but hey he did a wonderful job. …

Can't wait to see this movie. Might be the first Zombie movie with an A-List celebrity like Pitt. This is going to be an awesome ride. Will be going to the theatre for this one.

yeah could be good. I like Brad Pitt and Forster is decent at least.&amp;nbsp;

I admit the trailer looks great but I have no idea how it ties into the book. Even if it doesn't stick to the novel - a good zombie movie is hard to find, and this one looks like it will be pretty amazing.

Just watched the new&amp;nbsp;trailer&amp;nbsp;and it looks pretty good. They are using the fast 28Days later Zombies witch makes for a more intense movie in my opinion.