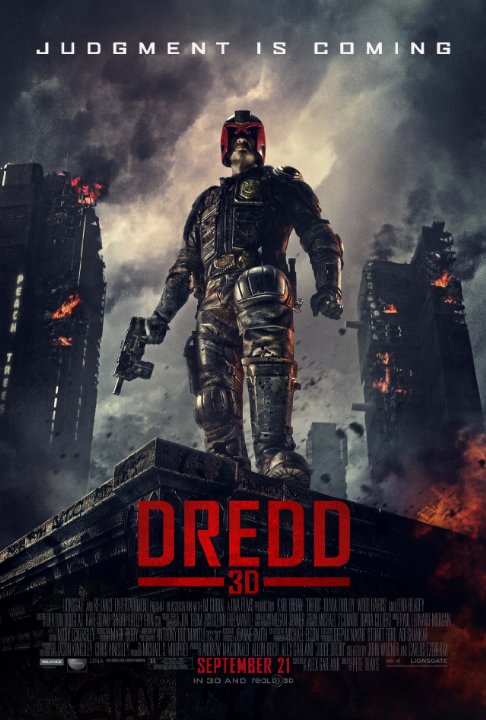 Plot: The future is now - police have been given the authority to act as judge, jury and executioner and a veteran cop partners with a trainee in order to take down a deadly gang that has introduced a new drug, SLO-MO, that alters reality. -- Chris Kavan

Too violent to be enjoyable. I love violent movies, don't get me wrong, but this one is just unnecessary.

Obviously the film is simply about the cops in the world of chaos dominated by drug dealers. This film is cool though, that SLO-MO substance is a killer, and the voice-activated guns is perfect for a dramatic and heroic action scenes, like you whisper the kind of shot you want and boom, you kill them all!

I am the LAW oh sorry wrong Movie. Dredd 3D. okay the trailer to this movie look crap and I thought it was going to suck but the movie didn't suck.the 3-D and the slow mo looks amazing.

Connoisseurs of the eponymous comic know that Dredd is rough, raw and contains brutal violence scenes in a gray and dark society where there is no future for the average person and crime rules. Judge Dredd reigns in this petty and aggressive society with a strict and ruthless brutal hand. The figure Dredd can be seen as a Robocop-like person with anabolic inflated muscles whose face is covered by his helmet all the time so we can only see a bitter grimace with somewhat frightening-looking razor sharp teeth. He's blunt,rude and there is no room for negotiation. That's my vision on the comic.

And this movie corresponds accurately with the description of the comic as described earlier. Compared to this movie, Judge Dredd from …

A futuristic world is filled with chaos. Here comes Pete Travis who brings in the lawmaker and his man the Dredd (Karl Urban) The Judges decide what is to be done to control the chaos in the city. To the trouble there is a narcotic leader called as Ma-Ma (played by Lena Headey). She orders chaos and bring the judges down. But Dredd is there for the judgement day. A new rookie called Anderson (Olivia Thirlby) helps Dredd go through levels to reach Ma-Ma. A fascinating question in my mind is whether Dredd is a futuristic video game where characters go level by level. Well the narcotic action called the slo-mo does some neat job. I even enjoyed the slow motion shoot outs in the film. But somewhere, I …

Hollywood takes a second stab at bringing the faceless, fascistic law giver to the big screen after Sylvester Stallone's badly misjudged outing in 1995. In fact the previous attempt wasn't a complete failure; it captured the feel of the comic strip quite well, with some excellent production design and well orchestrated set pieces. The problem was that the script completely missed the point of the character. Dredd NEVER removes his helmet and most certainly would not tolerate the dubious comic "talents" of Rob Schneider any more than I would. At least the new interpretation gets the first part right and Karl Urban's jutting, bestubbled jaw certainly looks the part as does the grimy, Mad Maxified version of the uniform and artillery. Unfortunately, once more the writer has woefully missed …

I'd say this will get a low, but fair, box office return due to it's lack of mainstream appeal. &amp;nbsp;I plan on seeing it opening weekend. &amp;nbsp;My interest has peaked, thanks to universally positive reviews and some awesome clips and trailers.

So predictions on this coming out - Better or Worse Box Office than Total Recall?Total Recall was a letdown for sure, but I can't see this doing better. My vote is for worse.

I used to collect the Jugde Dredd comics when I was younger, and if this new movie stay true to the dark athmosphere and over the top violence I think this will be a very entertaining movie. I am at least looking forward to this.

I've watched the trailer and have seen a short clip of action. &amp;nbsp;My initial thoughts have changed. &amp;nbsp;I'm looking forward to this movie now. &amp;nbsp;I still don't believe that it will be a 'good' movie, but it looks like it could be some good gory action filled fun. &amp;nbsp;Emphasis on GORY. &amp;nbsp;Also, it looks like the filmmakers have taken full advantage of the 'in-your-face' 3D, which is the only 3D I like.

I don't have any doubts that this will be a bad movie, but for some reason I still have a very small desire to see it.