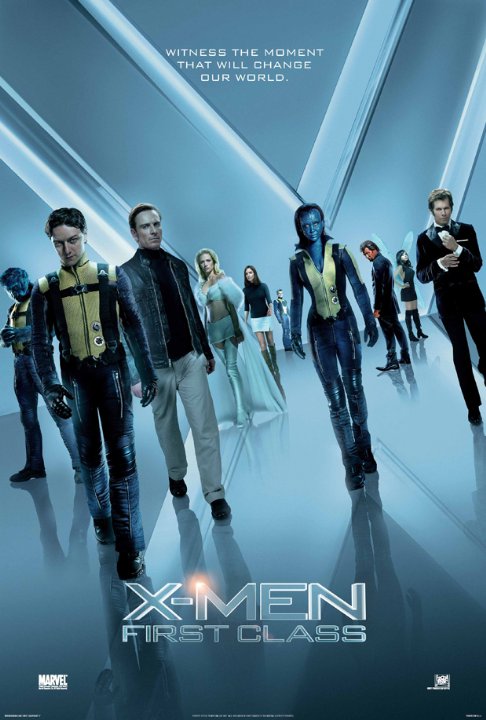 Plot: Explores the early relationship of Charles Xavier and Erik Lensherr when they were friends, long before they took the names Professor X and Magneto, and the rift that forms between turning them to arch-enemies. -- Chris Kavan

"X-Men: First Class" is a welcome return for the mutants after two disappointing rounds. It terrifically fleshes out its characters adding up to a worthy origin story, unlike 2009's "Wolverine."

Explores the early relationship of Charles Xavier and Erik Lensherr when they were friends, long before they took the names Professor X and Magneto, and the rift that forms between turning them to arch-enemies. This movie is better then x-men origins wolverine now that movie sucked. okay x-men first class as good visual effect's and good make-up.

In a depiction of exactly everything I wanted to see, X-Men: First Class remarkably succeeds in just about combining everything that was good about the last few films.

I especially like the way the film opened. A great throwback to the original X-Men movie, and I finally got the much-awaited continuation of that scene.

Michael Fassbender definitely steals the show. Every line he delivered, no matter in what language, was awe-inspiring. One of my favorite scenes was the confrontation in the bar in Argentina.
The script is full of excellent dialogue and ties in very nicely with past Marvel universe events and real-life political crises, while all the while persisting an interesting tone.
His counterpart James McAvoy played a convincing Charles Xavier. I adored the one-liners and …

The mutant saga only gets better as it goes along!

Yet another fantastic 2011 summer release! I have yet to see a bad movie about Proffessor Xavier and his band of mutants. Not only were they the #1 comic that i reached for as a child they are also the most exciting. The thing i most like about this franchise as it seems to get better and better as it progresses. This instalment being a prequel tells us alot about the origins of our favorite mutants. and how both of the good and bad alliances were originally formed. This is also packed full of CGI (CGI filled films will make me want to spend my hard earned dollar more then lets say a run of the mill basic action film. The story here begins with the clocks turning all the way back to the 60's during the missile crisis between US and Russia. As WW3 seems eminent both Magneto( Michael …

A young post graduate with the power to read minds joins with a holocaust victim with powers of magnetism to found a CIA sponsored training program for newly empowered mutants in the 1960s. X-Men: First Class is really what the first film SHOULD have been. Instead of the clumsy and constant exposition of the original, it expands on the best scene of the film featuring the first manifestation of Magneto's powers and shows the origins of his relationship with Xavier and how their ideologies and methods diverged. Not only that, but it does it with wit and style and the 60s setting gives it an epic quality that plays out on a world stage in history as well as some very cool old school Bond imagery provided by SFX legend John Dykstra. The only real weakness lies in its being the victim of the …

Just saw it and I'm glad I did. My new favorite X-men flick and best movie I've seen in theaters this year by far. Go see it now!

No one has seen this yet?

Positive reviews are starting to trickle in. It looks pretty damn good and it is exciting to hear it being compared to a james bond flick. Cool stuff.