The Adventures of Tintin Movie Information 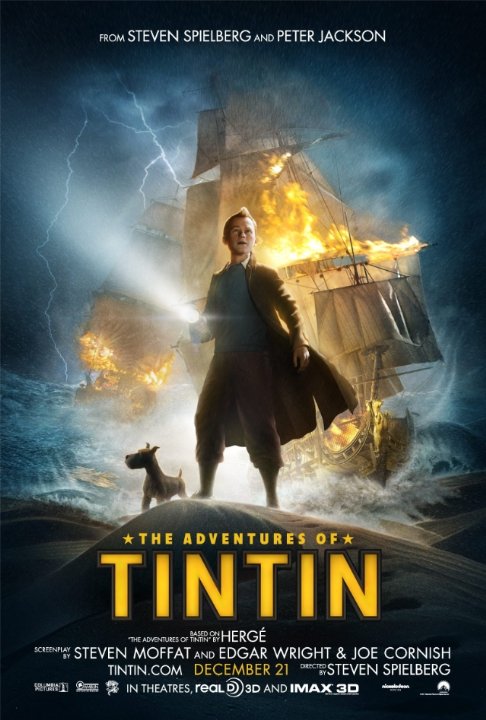 Plot: Clues pointing to the location of a sunken ship once commanded by the family of Captain Haddock leads Tintin and friends to a grand adventure. -- Chris Kavan

As fun as it looks on the surface, "The Adventures of Tintin" is utterly forgettable.

Tintin would you get me a tin of bear. Some scene I this film are like uncharted the game like him jumping off thing's yeah it's uncharted. The story in this is weak but good animation.

A solid animated film that plays more like National Treasure rather than Indiana Jones. Even if you're unfamiliar with the characters, it's a fun ride with some impressive CGI and inventive sequences. That being said, the movie is missing that magic touch that would elevate it - a bit hollow despite the bravado it displays.

Who's Tintin by the way?

Tintin finds a clue leading him to a great adventure of solving hundred years-old mystery.
***

The strength of this film, as we would all agree, were the direction and voice talents of the films, giving credits to the director Steven Spielberg and his voice actors Daniel Craig, Jamie Bell and Andy Serkins. The film was able to actually pt you in an adventure with great transitions and brilliant visualizations of every frame of every scenes. However, I think everyone would agree too that it lacks matter story wise, that it did not bring us new idea, having such kind of a common and usual adventure story with pirates, treasures, traveling through seas and desserts. Plus, even the characters failed to mark their identity.
This could have been a remarkable team up of Spielberg and …

The Best Animated Film of 2011

You should know that there is expected to be two more Tintin films, and that is a good thing.

I had the pleasure of reading the many Tintin comic books when I was younger, something that I recommend doing before you see this film. After hearing there was a movie planned, I was thrilled, to say the least. Like a geek, I researched everything and anything that had to do with the film, becoming more excited with every new discovery.

Then, I finally got to see the film. Was the film going to be awful? Amazing? Mediocre? I'll put it simply: I loved it.

But to say I loved this film, is not enough. I simply must gush on about this film, that was everything I could have wanted it to be, with few complaints.

Tintin is a good jolly visual ride that slowly sinks below the sea level.

The Adventures of Tintin is an American 3D animation film that reprises the great detective character tintin. The secret of unicorn which is been called outside north America is directed by ace person Steven Spielberg and produced by Peter Jackson. Spielberg for a while after making treasure movie Indiana Jones in 2007 is now back with another adventure motion capture film that follows the same pattern. This is very difficult to say a cent percent animation feature and neither easy to say a true motion capture film. The characters in the film are all looking partly generated and partly human. Plot takes its basics from the novel of the same title, whereas the action setups and some parts of narrative are made on …

I'd agree that it's worth a big screen watch.

Yeah I figured the texture wouldn't be there but that is great to know about the adventure aspect. With all of the movies I have to see, might be a rental but I hear that this needs to be seen on the big screen.

I don't know about 'grungy', but Tin Tin really did have a similar adventurous spirit to that of the Indiana Jones series. &amp;nbsp;It's a more kid friendly version with some fantastic visuals. &amp;nbsp;I had a lot of fun with it.

I think it is supposed to be decent but not what I would want from one of the greatest directors of all time. I am starting to really miss the 80s when everything was grungy and full of texture. Its not often that we get to see that kind of adventure movie anymore. Even the new Indiana Jones had lost the texture of the originals.

I don't know, I kind of enjoyed War of the Worlds.What about Catch Me If You Can. I think Spielberg isn't that bad