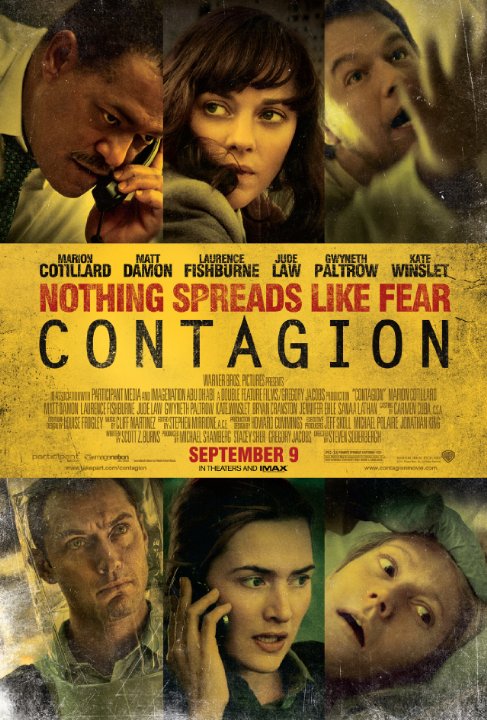 Plot: As a deadly, fast-moving airborne virus rapidly spreads, an international team of medical experts works to find a cure before society collapses around them. -- Chris Kavan

This movie was alright but it was slow at parts.

This movie is like the one i watched recently on tv almost exactly the same about a unknown virus spreading and the rush to find a cure and the cause of the virus. the only difference between this and that tv movie movie is that this one has some high profile actors i.e matt damon/jude law/kate winslet. But not even the acting can save the movie from feeling like a made for tv production. its been done before quite a few times and done better. jude laws part was the only intresting aspect to the film . wait till it comes on tv is my advice .

A highly infectious and deadly virus rapidly becomes a pandemic threatening the lives of millions as a team of scientists desperately attempt to create a vaccine. This medical thriller from Steven Soderbergh has a similarly scientific feel to it to the likes of The Andromeda Strain as we follow the CSI-alikes through a maze of technical jargon in their labs while society disintegrates around them as the rioting populace succumbs to hysteria. These scenes are extremely effective and there's a lot of tension during the race against the clock to find the cure, which makes the fact that the weak eco-message that makes the "climax" to the story even more disappointing. It may have worked better if the entire film had been told in reverse order a-la Memento or Irreversible, but as it stands …

Well one way to scare the pants off everyone is to make a realistic "It could really happen" type thriller. this movie does one thing and that is make you think. I'm not a fan of this type of film by any means however i will say this is most different them most killer virus strain films out there! It's ultra realistic!!
An all star cast portray a wide assortment of charectors who either have the disease or do not with stand out performances from both Kate Winslet and Jude Law. I only gave this film 2- 1/2 out of 4 due to it being a tad depressing for my liking then again it is what it is. I see this film being constantly compared to Wolfgang Peterson's 95 virus film 'Outbreak' which is my favorite of the two as it had way more things going on in the storyline!

Contagion is an intense thriller drama about an epidemic that spreads over the globe. It starts on Day 2 which didn't really make any sense at first. You find out why at the very end though. With Steven Soderbergh as director and a host of talented actors it's a roller-coaster from the very first unsettling scene, right up until the last frame. The scares come from things that human beings encounter every day. Make note that this movie will make you think twice about what you touch and who you speak to.

Matt Damon is terrific as the doting father, and husband who discover more about his wife (Gwyneth Paltrow) than he wants to know in the wake of her horrifying death when she returns from a trip to Hong Kong, visibly sick and passes the infection to her young son. Another key character …

No posts have been made on this movie yet. Be the first to start talking about Contagion!