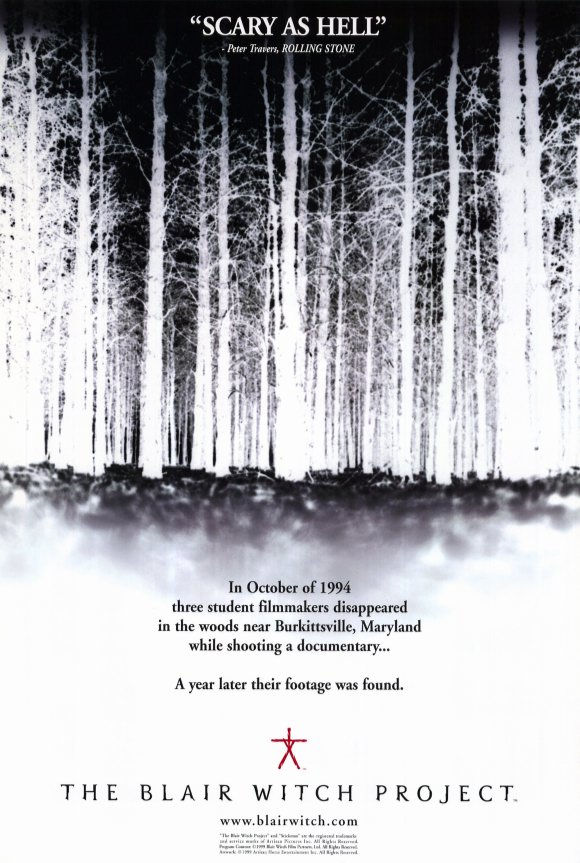 Plot: Three young filmmakers set out to investigate the legend of the Blair Witch in the town of Burkittsville, Maryland.

Hard to believe this movie was a hit back in the 90s. "The Blair Witch Project" has gone from revolutionary horror cult hit to dated and below average found footage relic.

This is by no means great material, but it does what the vast majority of imitators failed to deliver in it's wake; it feels 100% close to reality. When I look at this film, all I see is some young people playing movie director and having the worst time. The urban legend basis for their film project gives a solid setup to the whole proceedings and offers a very understated uneasy tone. I was interested all the way to the end, despite the lack of scares. The ending delivers the one true scare, leaving us with an abrupt send off that lingers after viewing. An interesting experiment that pays off to a mild point.

Three young stupid filmmakers set out to investigate the legend of the Blair Witch in the town of Burkittsville, Maryland. This movie is really slow and not scary at all. the movie is better then other bad found footage films at they but this movie is still bad.

The Blair Witch Project is arguably the most influential film in the "found footage" sub genre. It's the classic story about a group of naive (and stupid) college students who venture into the woods in search of the Blair Witch, a mythical entity that haunted Rustin Parr, a child serial killer. The first thirty minutes slowly go by as the group settles in and nothing noteworthy happens. However, when the group finds strange stick figures hanging from the trees the film really starts. To make matters worse, the group's map is carelessly discarded and the rest of the film plays out as spectacle of rage, horror, and desperation as they attempt to find a way back into civilization.

The Blair Witch Project is certainly one of the most frightening and suspenseful horror films. The …

Sometimes when something is too popular, the cynics think it's crap. Blair Witch is not just one of the most referenced and discussed horror films in recent year, it is one of the most referenced films, regardless of genre, in the history of the art. Scream can suck it, THIS is the quintessential horror film of the 1990s. I had said that The Texas Chainsaw Massacre was highly influential on the previous ten years of horror films, but where you would see traces of it all over the place, there is an entire sub-genre of films made entirely in the shadow of the Blair Witch, (and even films before it) that can not even be talked about unless there is some mention of the title. Cloverfield, Rec., Paranormal Activity, Poughkeepsie Tapes, Last Broadcast, , Zero Day, you name it...I'm sure if you …

No posts have been made on this movie yet. Be the first to start talking about The Blair Witch Project!