Plot: Batman and Robin team up to stop villains Poison Ivy and Mr. Freeze in a duo that both seem to understand the importance -when Batgirl appears.

Unlikably cartoonish and flat, we all wish this entry into the Batman franchise never happened.

Batman and Robin is so horrific, I puked my guts out!! IF YOU LIKE BATMAN, DON'T WATCH THIS! HORRIBLE CHARACTERS AND STORY, DULL ACTION, AND GREAT ACTORS ARE TERRIBLE!!!

This was the final nail in the coffin for the Batman franchise for many years. What began as colorful themes, evolved into a mockery. It just becomes ridiculous to the point where it is actually similar to the 50's era Batman with its on screen sound effects.

By this point, most people consider this to be one of the worst superhero movies ever made, and they are right. This is the film that completely destroyed the first Batman series on the big screen. Director Joel Schumacher took everything from his first (mediocre) effort, Batman Forever, and took everything to the extreme. The dialogue is even cornier, the acting is somehow worse, and the plot is just ridiculous. In the grand scheme of things, Batman & Robin is the absolute worst Batman film ever made, and will probably hold that title for a LONG time.

What is the genius plot they came up with this time? Batman & Robin are trying to stop Mr. Freeze and Poison Ivy from covering Gotham City with Ice and Vegetation. Mr. Freeze needs to steal diamonds because he needs them to survive … 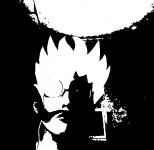 Ugh, so disappointed. What the heck happened here?! This movie had so much potiental to be amazing and it failed, majorly. We're introduced to Robin and Batgirl, both who are just terrible. I couldn't stand Robin and don't even get me started about how angry I am that they screwed up Babs story. Then we're introduced to far too many villians to fit into one solid movie. That was another problem. We had to juggle between Two-Face (who I liked), Poison Ivy (ah, so-so), and Dr. Freeze (blaaah). All three villains barely get any screen time so we don't find out much about them. That angered me because both Dr. Freeze and Poison Ivy were origin stories as well and they just skimmed over it.

Overall, terrible movie. I really only gave it a star and a half because I'm obsessed with the …

No posts have been made on this movie yet. Be the first to start talking about Batman & Robin!